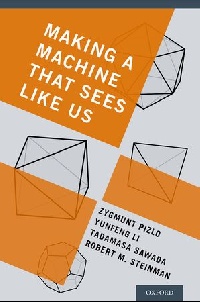 Similar publications
Symmetry is the sine qua non of shape
Li Y., Sawada T., Shi Y. et al. In bk.: Shape perception in Human & Computer Vision. NY: Springer, 2013. P. 21-40.
Computational Vision: From Surfaces to Objects
Boca Raton: Chapman-Hall/ Taylor and Francis Group, 2011.
Концепция когнитивных кадров
Алюшин А. Л. Философские науки. 2010. № 11. С. 104-115.
Perceiving Perpendicular and Parallel Contours in the Frontoparallel Plane
Koshmanova E., Sawada T. Psychology. PSY. Высшая школа экономики, 2018. No. WP BRP 90/PSY/2018.
This is an empirical study. The perception of a pair of contours in a retinal image cannot be understood simply by adding up the perceptions of the individual contours, especially when they form a perpendicular junction, or are parallel to one another. It is the relationship among the contours that determines what is perceived. Note that it is hard to actually compare the perception of such configurations quantitatively. We managed to do this by testing the perception of such configurations in three psychophysical experiments in which the perception was characterized by measuring the orientation threshold of a single contour. This threshold was estimated by using a modified Method of Constant Stimuli based on the assumption that contours forming a configuration are perceived individually, and that they are integrated linearly. This assumption made the quantitative comparison of the perceived configurations possible. We found that changes of the estimated threshold depended on the type of the configuration, specifically thresholds estimated from a perpendicular junction were substantially lower than thresholds estimated from a single contour or from a non-perpendicular junction. The lowest thresholds were observed when the threshold was estimated from a pair of parallel contours. These results suggest that the visual system is sensitive to perpendicular junctions and parallel contours in a retinal image.
Shape perception in Human & Computer Vision
NY: Springer, 2013.
Exploratory meg study of the illusory contour perception: positive and inverted effects
Evina E., Pronko P. K., Goyaeva D. E. et al. PSYCHOLOGY. WP BRP. Издательский дом НИУ ВШЭ, 2013. No. 07/PSY/2013.
The illusory contour is one of the most often used models in studies of Gestalt perception. In our MEG study we observed the so-called illusory contour effect (IC-effect): the activity of non-primary visual and associative cortical areas was increased during the 150-250 ms time window after a stimulus onset in response to illusory stimulus, compared with the control stimulus. In addition to the positive IC-effect, the inverted IC-effect was revealed for the first time in adults. In our study it was manifested during the 60-120 ms window after the onset of stimulus. The in-verted IC-effect is an early decrease in the activity of the visual cortex in response to the illusory contour compared with the control stimulus. The mechanism of the inverted IC-effect is yet un-clear. The “bottom-up” and “top-down” hypotheses of the origin of the inverted IC-effect are discussed.
Direct and reverse projection procedures in problems of 3D objects reconstruction from images
Veselov E. A., Uvaysov S. U., Lvov B. G. et al. In bk.: Innovative Information Technologies: Materials of the International scientific–practical conference. Part 2. Prt. 2. M.: HSE, 2014. Ch. 2. P. 710-716.

This article presents a research of direct and reverse projection procedures. Presents Mathematical calculations of spatial situated point projection are presented as particular case for obtaining the expressions which describe this process. The application of these processes in problems of three-dimensional object reconstruction from images is demonstrated by a simple 3D object.

Seeing a Triangle in a 3D Scene Monocularly and Binocularly
Minkov V., Sawada T. Psychology. PSY. Высшая школа экономики, 2018. No. WP BRP 91/PSY/2018.
Theoretical understanding of a visual stimulus in a psychophysical experiment is critical for controlling the experiment and for interpreting its results. This fact encourages vision scientists to use “simple” visual stimuli. A triangle in a 3D scene is one of the simplest stimuli for studying 3D perception. In this study, we analyzed geometrical properties of a relation between the triangle and its retinal image using a computer algorithm. Based on the analysis, we discuss validity of results of past studies that used triangles as their visual stimuli.
Образ просящего милостыню в московском метро
Астахова Н. В. Вестник Российского университета дружбы народов. Серия: Социология. 2011. № 3. С. 95-103.

The article presents the results of the sociological research The analysis of the image of the beggar in the Moscow underground, using the methods of unstructured interview and semantic differential. The author analyses the prerequisites for the emergence and the current state of the poor in Russia. She also proposes some principles of identifying and assessing the images of perceiving beggars based on applying projective methods and the quality approach to the collection of sociological data. As a result of the research, the methodology was tested and Moscow inhabitants' perception images of the beggar were assessed.

Методика построения кривой безрисковой доходности «спот» и кредитных спрэдов для группы облигаций с неоднородным кредитным качеством эмитентов: стандарт EFFAS-EBC для стран Еврозоны
Смирнов С. Н., Захаров А. В., Рачков Р. В. и др. Финансовая инженерия, риск-менеджмент и актуарная наука. WP16. Высшая школа экономики, 2007. № WP16/2007/03.
Short lists with short programs in short time
Bauwens B., Makhlin A., Vereshchagin N. et al. Electronic Colloquium on Computational Complexity. Technical report. Hasso-Plattner-Institut, 2013. No. TR13-007.
Given a machine $U$, a $c$-short program for $x$ is a string $p$ such that $U(p)=x$ and the length of $p$ is bounded by $c$ + (the length of a shortest program for $x$). We show that for any universal  machine, it is possible to compute  in polynomial time  on input $x$ a  list of polynomial size guaranteed to contain a $O(\log |x|)$-short program  for $x$. We also show that there exist computable functions that map every $x$ to a list of size $O(|x|^2)$ containing a $O(1)$-short program for $x$ and this is essentially optimal  because we prove that such a list must have  size  $\Omega(|x|^2)$. Finally we show that for some machines, computable  lists containing a shortest  program must have length $\Omega(2^{|x|})$.
Труды ХХ Международного совещания «Радиационная физика твердого тела» (Севастополь, 5 июля - 10 июля 2010 г.)
Edited by: Г. Г. Бондаренко Т. 1-2. М.: ФГБНУ "НИИ ПМТ", 2010.
Components of enterprise IT strategy: decision-making model and efficiency measurement
Zelenkov Y. International Journal of Information Systems and Change Management. 2014. Vol. 7. No. 2. P. 150-166.