Collection of articles is based on materials RUSO Conference October 26, 2013 and primarily focuses on different aspects of origin , course and consequences of the First World War. We investigate the approaching of the war , its relation in Russian and foreign historiography , problems of international relations of the era , the situation in the army and navy. The second major unit materials collection associated with the history of the Great Patriotic War. Considered moral questions of the political climate in the Soviet Union before and at the beginning of this war, the economy , the activities of individual units. Again referred to the exploits of heroes Panfilov . The collection also has special film Prutian campaign in 1711 , Russia's participation in the anti-Napoleonic wars , as well as a number of other problems of Russian history is closely connected with the history of some foreign countries .
The collection is intended primarily for historians - researchers, university professors, as well as for all those interested in domestic history of modern and contemporary . 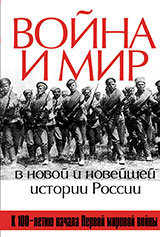 Similar publications
Paleoconservatism of the Southern Agrarians
Belkovich R. Law. LAW. Высшая школа экономики, 2013
The emergence of the Tea Party movement in recent years has shown that under the surface of mainstream political life in the USA there exists a different layer of ideas, which cannot be satisfactorily described in terms of the Republican/Democrat dichotomy. These ideas have their origins in the foundation of the American Republic, which owes a lot to ancient and mediaeval political theory. In the twentieth century there was a revival of these ideas in the form of the so-called “paleoconservative” movements which rediscovered their ancient and mediaeval heritage. This paper focuses on one of them, the Southern Agrarian movement, as exemplary of this radical intellectual project.
Nonviolence - Practical Applications and Theoretical Foundations
Boston: Lexington Press, 2014.

From Universal Laws to Historicity of Knowledge: The Realist Interpretation of Tolstoy's View of History in 'War and Peace'
Morozova N. Saarbrücken: 2008.

Hobbesian philosophy holds the attention of the researches up to now. The most discussable questions are the following ones: 1. Whether the philosophy of Hobbes is to be considered in relation to his physics and metaphysics or it is an autonomous area of contemplation? 2. Is the philosophy of Hobbes immanently intelligible, as a system of interrelated suppositions or it is to be interpreted out of the historical context of his published works? 3. Is his bellum omnium contra omnes merely an intellectual construction or this notion can be referred to the historical and universal facts of social life design?

The article deals with F. Kafka’s attitude to the First World War, reflected in his letters, diaries and prose.

International Studies in Military Ethics
Edited by: M. Revue. Brill, 2017.
Minimal Justice and Regime Change in Brian Orend’s Political Ethics
Kumankov A. Философия и исследования культуры. WP20. Высшая школа экономики, 2016
Brian Orend, one of the leading just war theorists, is best known today for elaborating jus post bellum principles while his works contain another distinctive component, concept of “minimally just” political community. This article explores Briand Orend’s conception of “minimally just” political community, especially the meaning of this concept for Orend’s version of just war theory. Orend uses Kantian political and moral philosophy in order to prove there are two key functions of state: protection of human rights and establishing order. Since human rights are universal, a state should assist in protection of human rights of every person, not only its citizen’s rights. This leads to situation when states avoid of harming foreigners and aggressive wars become banned. Orend call a state “minimally just” if it follows these rules. However, these states could violate non-intervention principle and start wars. A crucial point here is an idea that a “minimally just” state has a right to fight for the overthrow of the aggressive regimes and establishment of “minimal justice”. The author concludes that this notion helps Orend extend the list of just causes of war, though his original intention was limitation of cases when arms could be used.
Становление бухгалтерского учета амортизации в России
Еременко Т. В. Финансы и бизнес. 2012. № 1. С. 203-213.