The external dimension of Justice and Home Affairs: A different security agenda for the European Union?

This book proposes to cast some theoretical and empirical light upon the external dimension of Justice and Home Affairs (JHA) which has become a priority in the European Union (EU)’s external relations. Counter-terrorism, visa policy, drug trafficking, organized crime or border controls have indeed become daily business in EU’s relations with the rest of the world.

The external dimension of JHA is a persistent policy objective of the EU and its member states, as the 1999 Tampere summit conclusions, the 2000 Coreper report, the 2005 Strategy for the External Dimension of JHA, and the integration of JHA chapters under the European Neighbourhood Policy testify.

With an interdisciplinary ambition in mind, this book reflects an attempt to draw together theoretical and empirical insights on the external dimension written by academic scholars that take an interest in questions of JHA and European Foreign Policy (EFP). It does so from an issue-oriented perspective (civilian crisis management, the European Neighbourhood Policy, counter-terrorism policy, visa policy, passenger name record) but also from a geographical perspective with in-depth analysis of the situation in the Western Balkans, Georgia, transatlantic relations and of the Mediterranean neighbourhood.

This book was published as a special issue of the Journal of European Integration.

Chapters
The externalization of JHA policies in Georgia: Partner or hotbed of threats?
Di Puppo L., , in: The external dimension of Justice and Home Affairs: A different security agenda for the European Union?. .: L.: Routledge, 2009.. P. 101-116.
This paper argues that the European Union’s attempts to externalize JHA policies and turn neighbouring countries into partners contributing to its internal security are hampered by numerous factors, including its obvious ambivalence towards these countries. The limitations of pursuing internal security objectives through a ‘soft’ partnership approach are particularly visible in the South Caucasus. The ...
Research target: Political Science, International Relations, and Public Administration Law
Priority areas: law
Language: English
Keywords: European UnionjusticesecurityHome Affairs 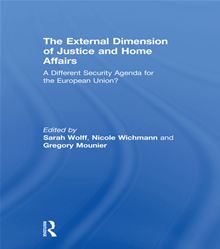