With a view to ensuring a follow up of the implementation of the Recommendation, the International Labour Office was instructed to assist constituents in developing national policies and setting up monitoring and implementing mechanisms, as well as to promote good practices at the national and international levels concerning the determination and use of employment relationships.
In response to that decision, the International Labour Office, developed in 2007 an Annotated Guide to Recommendation No. 198 using the technical expertise of a group of experts from around the world which presented examples in law and practice on how the various aspects of the Recommendation were being dealt with in many countries in different regions.
Over the recent years, there have been increasing developments at the European level regarding the employment relationship in legislation, case law, collective agreements and soft law. In this context, the ILO, and in particular, the then Industrial and Employment Relations Department (DIALOGUE) undertook a strategic partnership with the European Labour Law Network (ELLN), a network of independent legal experts from all European Union Member States and European Economic Area countries, in order to produce an updated version of the 2007 annotated Guide with a specific focus on European countries.
The European Labour Law Network was established in 2005 on the initiative of Professors Guus Heerma van Voss (University of Leiden) and Bernd Waas (the University of Frankfurt am Main), the latter being the editor of this Guide. The European Labour Law Network is comprised of non-governmental legal experts from all European Member States and the EEA countries. In December 2007, the European Labour Law Network signed a contract with the Directorate-General for Employment, Social Affairs and Inclusion of the European Commission in Brussels (formerly the Directorate-General for Employment, Social Affairs and Equal Opportunities) and, under the name ‘European Network of Legal Experts in the Field of Labour Law, dealing with both individual and collective rights/aspects’, became the European Commission’s official advisory board on issues relating to developments in individual and collective labour law. In this capacity, the Network has been conducting extensive research for the European Commission. Among other things, it produced a Thematic Report on the “Characteristics of the Employment Relationship” in 2009. This guide builds upon updated information analysed in that research project. (More information at: http://www.labourlawnetwork.eu).
In summer 2013 International Labour Office approached Russian labour law scholars, - associate professors Elena Gerasimova (NRU HSE), Nikita Lyutov (MSAL, NRU HSE) and Daria Chernyaeva (NRU HSE), – with a suggestion to prepare a Russian translation of the Gude and to amend it with materials concerning the CIS countries. 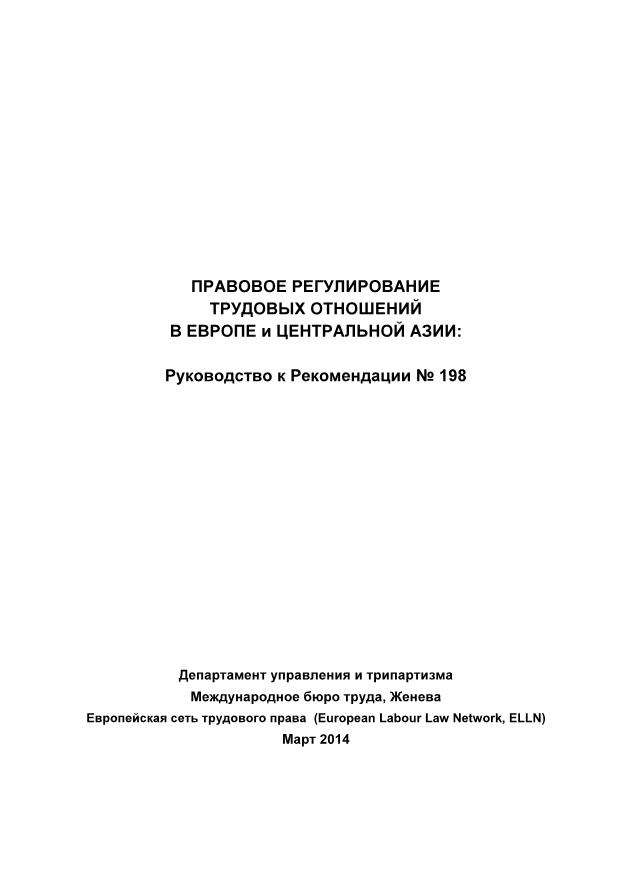