From Universal Laws to Historicity of Knowledge: The Realist Interpretation of Tolstoy's View of History in 'War and Peace' 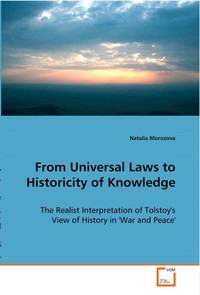 In this paper, the author analyzes theories of free will proposed by neurophysiologist Benjamin Libet and psychologist Daniel Wegner, and also engages with criticism of both theories by philosopher Daniel Dennett. In the end the author gives her own evaluation of these theories.

Становление личности Энн Бронте как художника
Плякина Е. А. Вестник Нижегородского государственного лингвистического университета им. Н.А. Добролюбова. 2012. № 17. С. 167-177.
The article studies the emerging of Anne Bronte as an English Victorian writer of the 19th century and looks at the factors that particularly influenced her development as a person and as an artist (family background, environment, historical period, education, religious beliefs, love, age and experience), thus focusing on how the facts of Anne Bronte’s biography influenced her creative work. The concept of religious crisis of Anne Bronte is introduced into practice. Using the biographical method, the paper describes the gradual development of Anne Bronte’s outlook through the different stages of her life, introducing the concept of a religious crisis in her life and presenting the reasons behind Anne Bronte’s conscious choice to be different from her sisters, both in terms of personality, and in the writing.
The Scientific Study of Myth: Romantic Account of Symbolism and Mythology
Shalaeva A. Humanities. HUM. Basic Research Programme, 2015. No. 100.
The present study seeks to investigate the arrangement of the science of mythology at the turn of the 19th century, and an understanding of the scientific work, which enabled to consider mythology a discipline. The research in a case of interpretation of the notions of myth and symbol explores prerequisites and framework for the study. The findings of the research illustrate the role of the disciplinary argument and publishing strategies in the debates surrounding mythology’s conceptual bases. The research demonstrates that at the turn of the 19th century mythology was established both as a subject of research and as a discipline in its own right on the crossroads of disciplinary arguments, knowledge differentiation and knowledge distribution strategies.
Предпосылки возникновения британской экономической науки
Вырская М. С. Вестник Московского государственного областного университета. Серия: Философские науки. 2011. № 3. С. 188-194.

This article is dedicated to the problem of the origin of economics. The socio-cultural conditions for the emergence of a new science are considered: the accumulated practical knowledge that accompanied the development of trade, industry, and eventually led to the emergence of a market economy; theoretical and practical knowledge from rich literary sources; the Ancient, Medieval and Modern Time philosophers interest in the ongoing economic processes, posing questions about these processes, revealing the problems of meaning and signifi cance of economic events for the society. The article especially focuses on the Scottish philosophers of the 17 and 18th centuries F. Hutcheson, D. Hume and A. Ferguson, the socio-economic views of the latter being of special importance as well as the views of Adam Smith, whose ideas show close affi nity between the thinkers.

Realism is making a comeback in Europe. This book brings together a new generation of realist scholars. It provides a rigorous survey for specialists seeking to understand the dynamics of international relations in a time of change. The volume thus seeks to explore the European dimension to neoclassical realism. The hope with this book is that it will spark a debate that, in time, might lead to the re-emergence of a distinctly European realist school which draws on the roots of the historical, non-American realist tradition, benefiting from insights in the liberal-constructivist paradigm. Through detailed case studies, the book illustrates that power and influence remain fruitful, even indispensable variables through which to understand the formation of foreign policy.

The Doctrine of Public Education of Condorcet in Light of the Discussion on Women'S Rights and Slavery at the Beginning of the Third Republic
Ugleva A. V. Humanities. HUM. Basic Research Programme, 2015. No. WP BRP 94/HUM/2015.
This paper offers an analysis of the public education project proposed by Nicolas de Condorcet (1743-1794) which appeared to be too modern for the late XVIII century but extremely vital for the last three decades of XIX century. His ideas were taken and made foundation for the reforms proposed by Jules Ferry and Ferdinand Buisson, whose names are traditionally linked with the formation of the “republican school” in France
The Return of Geopolitics in Europe? Social Mechanisms and Foreign Policy Identity Crises
Edited by: S. Guzzini. Cambridge: Cambridge University Press, 2012.

This comparative study shows how the revival of geopolitics came not despite, but because of, the end of the Cold War. Disoriented in their self-understandings and conception of external role by the events of 1989, many European foreign policy actors used the determinism of geopolitical thought to find their place in world politics quickly. The book develops a constructivist methodology to study causal mechanisms, and its comparative approach allows for a broad assessment of some of the fundamental dynamics of European security.