Governance and the State: Theory and Russian Specifics

Definitions: State is a type of polity that is characterized by two main dimensions: “statehood” and “stateness.” Statehood is the recognition of the state by other states as independent nation, equal to others to participate on international arena; receiving and having the “statehood” for country mean that it is a part of the “concert of nations,” such as the member of the United Nations organization. Stateness is a state capacity to sustain its territory, nation, and citizens’ welfare; it is not enough being recognized by other states as such, but also important to support this status in time 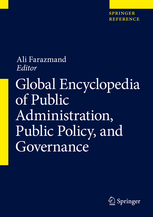 These Proceedings represent the work of contributors to the 14th European Conference on Management Leadership and Governance, ECMLG 2018, hosted this year by the HU University of Applied Sciences, Utrecht, Netherlands on 18 - 19 October 2018.  ECMLG is a well established platform for individuals to present their research findings, display their work in progress and discuss conceptual advances in many different branches of Management, Leadership and Governance. At the same time it provides an important opportunity for members of the community to come together with peers, share knowledge and exchange ideas. The conference is generally attended by participants from more than 35 countries and attracts an interesting combination of academic scholars, practitioners and individuals who are engaged in various aspects of management, leadership and governance.

The concluding chapter takes stock of the book’s core notion of high participation systems (HPS) of higher education, in the context of the eight country studies and seventeen HPS propositions. The propositions engender extensive, though not unanimous, support. Declining institutional diversity and more complex governance are broadly agreed, but Finland and Norway differ from the other cases in stratification and equity. The HPS theory and findings are compared and contrasted with Martin Trow’s seminal work. The book ends with a central and enduring tension in HPS. Higher education as self-formation empowers individual agency in HPS on a larger and more inclusive scale. Yet, in HPS those without higher education are more disadvantaged; the average graduate has less social and occupational distinction; and secular tendencies to intensive competition for elite education and institutional bifurcation lead to greater inequality in educational and social outcomes, unless Nordic-style values are sustained.