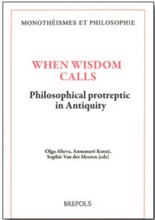 Philosophy has never been an obvious life choice, especially in the absence of apparent practical usefulness. The intellectual effort and moral discipline it exacts appeared uninviting “from the outside.” However, the philosophical ideals of theoretical precision and living virtuously are what has shaped the cultural landscape of the West since Antiquity. This paradox arose because the ancients never confined their philosophy to the systematic exposition of doctrine. Orations, treatises, dialogues and letters aimed at persuading people to become lovers of wisdom, not metaphorically, but truly and passionately. Rhetorical feats, logical intricacies, or mystical experience served to recruit adherents, to promote and defend philosophy, to support adherents and guide them towards their goal. Protreptic (from the Greek, “to exhort,” “to convert”) was the literary form that served all these functions. Content and mode of expression varied considerably when targeting classical Greek aristocracy, Hellenistic schoolrooms or members of the early Church where the tradition of protreptic was soon appropriated. This volume seeks to illuminate both the diversity and the continuity of protreptic in the work of a wide range of authors, from Parmenides to Augustine. The persistence of the literary form bears witness to a continued fascination with the call of wisdom.