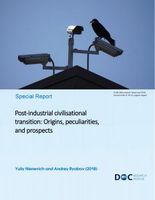 Our era is closely connected with the ‘digital revolution’ that has irreversibly extended humanity’s capacity for progress. This is especially clear when one compares the digital revolution with innovations across the entirety of human history. Meanwhile, the topic of ‘barbarism’ remains on political agenda; this is a phenomenon antithetical to civilisational achievements. Barbarism is mentioned when discussing extremely aggressive inter-ethnic clashes and inter-religious conflicts and is used conceptually to signify destruction of historical and cultural monuments. Barbarism is also discussed in reference to something else: as a by-product of a contemporary civilisation that oversimplifies culture, the dissemination of ideas about the world, and the realities of humanity, and does so at the level of collective consciousness. The topic of barbarism is important for contemporary scientific agendas. Sociologists, psychologists, and ethnologists study issues relating to barbarism and try to find an explanation for its social roots, in order to better understand the nature of ethnic and religious conflicts, and the psychology behind terrorism. In this essay, we will approach barbarism from an academic point of view, as a complicated socio-cultural and political phenomenon, which has appeared across historical eras, regions, and civilisations in different ways. We examine two concepts of barbarism: the first, horizontal barbarism, which is closer to traditional interpretations of barbarism. The second is ‘vertical barbarism’ (Rathenau in Ortega y Gasset, 1929), which entails making social realities rougher, simpler, and more primitive. Whereas the first notion is related to direct clashes between different ethnic groups, religions, and civilisations, the second concept refers to complicated social processes, primarily involving powerful vertical mobility, with increasing opportunities for different groups of people to gain access to the advanced achievements of human civilisation. The contemporary era is unique: despite the massive technological progress associated with globalisation, which many argue is supposed lead to the unification and standardisation of social reality, discrepancies between social and economic patterns of life Dialogue of Civilizations Research Institute 2 remain, and different civilisations and political regimes interact with one another in complicated ways. In our research, we do not consider barbarism some sort of evil personified by ‘bad guys’, a notion that contradicts and hinders the ongoing progress of human civilisation. Such an approach might result in the illusion that barbarism can be easily eliminated. Adhering to such a fallacy must be avoided so that accurately informed decisions can be made. For the authors, barbarism, whether it is ‘horizontal’ or ‘vertical’, is a phenomenon inseparable from human civilisation’s development, and in most cases, is neither reactionary nor a ‘force of reaction’. The progress of human civilisation, while reducing the likelihood of barbarism, creates certain conditions for the its sudden appearance in unexpected and illogical circumstances. That is why the main goal of this essay is to understand the processes that lead to barbarism, and how barbarism can be weakened. We see the fight for the diminished influence of barbarism, and its consequent marginalisation, as a complicated process, based on a deep understanding of the mechanisms of barbarism’s evolution. Thus, we employ a historical approach that makes it possible to better understand the reasons for the increase in barbarous activity and helps reveal the characteristics of its evolution. The essay begins with a theoretical analysis of the phenomenon of socio-cultural and political barbarism. Then we analyse this with reference to specific historical periods,countries, and regions.