Our Yearbook ‘History and Mathematics’ has already celebrated its 10th anniversary and has confidently entered its second decade. The common feature of all our Yearbooks, including the present volume, is the usage of formal methods and social studies methods in their synthesis to analyze different historical phenomena.

The present Yearbook (which is the seventh in the series) is subtitled ‘Big History Aspects’. This issue is devoted to the problems of evolutionary development of the world. In no way will it be a digression from the direction which we have initially defined for our Yearbook, but just an extension of the scope of the research. The matter is that there are two kinds of history: the history of nature (or more exactly the Universe and the Earth) and the history of humans and mankind. It is not surprising that the idea of historicism penetrated almost every scientific field. At the same time the search for common foundations of this endless in its diversity world has intensified. One of the directions of this interdisciplinary search for the unity of the world in its diversity is Universal Evolutionism (Big History). Mathematical and formal methods help to understand much deeply both natural and human history.

We hope that this issue will be interesting and useful both for historians and mathematicians, as well as for all those dealing with various social and natural sciences. 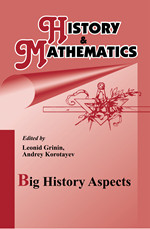