The Geopolitics of Eurasian Economic Integration

The recent crisis in Ukraine cast a spotlight on those countries located between Russia and the EU, a region that had long existed beneath the radar of international politics. Indeed, even its name remains indeterminate: the term 'post-Soviet' is too encompassing (it could also designate Estonia or Tajikistan) while the notion of 'Eastern Europe' has long lost any geographical anchor. Instead, this space is often named after regional powers’ attempts to shape it: as the EU’s 'Eastern Neighbourhood' or as Russia’s 'Near Abroad'. The new region-building endeavour pursued by Russia through Eurasian integration frameworks is a crucial development in this regard.

On the 29 of May 2014, Russia, Belarus and Kazakhstan signed the Treaty establishing the Eurasian Economic Union (EEU), which extends the provisions of the existing Eurasian Customs Union (ECU) and comes into being in 2015. This integration regime has been lauded by Russian President Vladimir Putin as a new, better version of the European Union, and castigated by US Secretary of State Hilary Clinton as a new form of the Soviet Union. This report shows that it is neither. The EEU is a modern and far-reaching attempt at economic integration, but one that is weakened by internal and conceptual contradictions. What was designed as a geo-economic framework is increasingly becoming a geopolitical issue. In attempting to counter the influence of the EU’s alternative integration regime (the Eastern Partnership), Russia has shifted its diplomacy from persuasion to coercion, and Moscow is increasingly resorting to using the EEU as a foreign policy tool. The countries of the entredeux – literally, something placed between two things – are being forced to face to a geopolitical choice they had been trying to avoid, or at least to defuse. Divisive domestic politics, separatism, structural dependencies and the economic and political calculations of internal actors are key factors mediating and complicating their choice. This report focuses on these issues that are too often overlooked in the debate on Russia-EU regional competition. 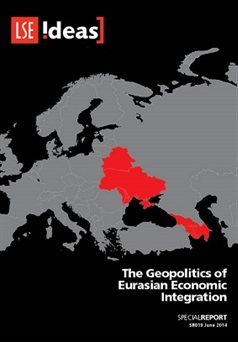