How to Assess a Democracy. What Alternatives? [Text] : rep. at XV Apr. Intern. Acad. Conf. on Economic and Social Development, Moscow, April 1–4, 2014

The assessment of a democratic regime is a classic topic in political science, which more recently has been attracting a lot of attention and reconsidered in different empirical perspectives. In fact, this issue has been reconsidered and reworded within empirical research as: “What is a good democracy?” or, better, “What is democratic quality?”.

When looking back, at least as far as the early 1970s, the origins of our question are evident: a) if in recent decades discontent, dissatisfaction, and alienation are growing political phenomena in old, established democracies, the reasons for these attitudes, resulting from the perceived low quality of the regimes, are particularly salient; b) if more and more countries are defined as democratic, the question of what the implemented regimes labelled as democratic effectively are is more and more relevant and consequently the key question again seems to be: what is the democratic quality of those regimes?; c) if situations of uncertainty with regard to existing regimes are growing, that is, if there are a large number of so called hybrid regimes, the problem of looking behind the façade is still relevant and how to turn these regimes into democracies by improving their quality is once again very salient.

If we focus on the existing rich literature on democracies and democratizations, there are at least three main streams of literature: 1) for scholars who have been working on democratizations, consolidation and crisis included, the need to look behind the façade of established institutions meant addressing questions about the content and actual working of those institutions; 2) scholars of established democracies, especially those belonging to the Anglo-Saxon tradition, i.e. the UK, Canada, and Australia, conducted research on so-called democratic auditing; 3) a number of data banks, such as those of Polity IV, Freedom House, the Economist’s Intelligence Unit, the World Bank, and also the Bertelsmann Index, provide measures of aspects related to democratic performance and, more generally, to the quality of democracy. 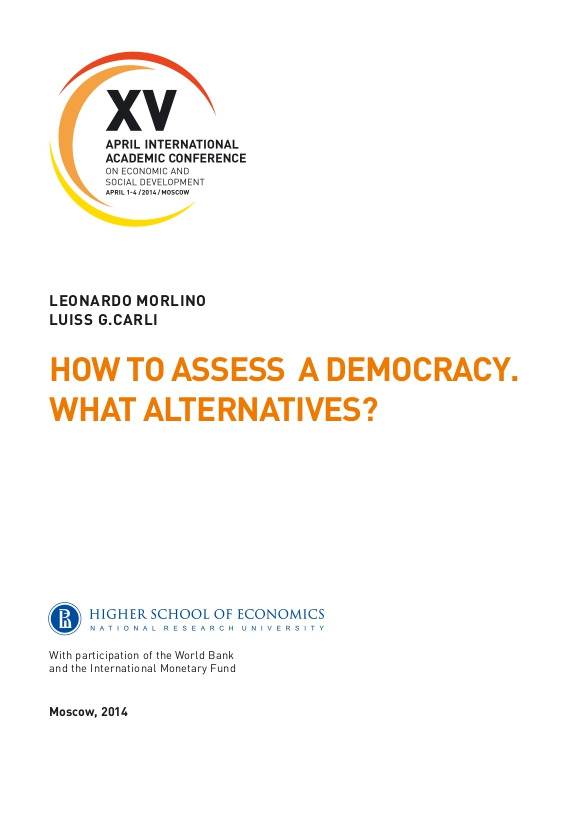 Factors of Post-Socialist Stateness
Ilyin M., Khavenson T., Meleshkina E. Y. et al. Political Science. PS. Высшая школа экономики, 2012. No. 03.
Stateness is the capacity of the state to exercise its fundamental functions. The collapse of the socialist system prompted the former USSR countries to „re-invent‟ their stateness. The paper focuses on factors that impede or smooth stateness transformations in post-socialist countries. First, the paper examines internal and external factors of state formation in our selected countries. Next, it introduces empirical research vehicles and empirical findings that present alternative patterns of stateness and outcomes of state formation. The paper concludes with a detailed review of certain cases that may be considered prototypes of state formation for the post-Soviet countries.
Democracy versus Modernization: a dilemma for Russia and for the world
Под науч. редакцией: V. L. Inozemtsev, P. Dutkiewicz. NY: Routledge, 2012.