Russian multinational enterprises (MNE) expanded widely in the late 1990s through the summer of 2008 at the onset of the global financial crisis of 2008. The emerging market MNEs have now become a subject of intensive study with a particular focus on the actions and behaviors of firms from Brazil, Russia, India, China, and South Africa (BRICS). This paper attempts to flesh out the reputational and corporate social responsibility (CSR) aspects of this internationalization process. The paper finds that in select cases the reputation of a Russia MNE does play a role in their activities and that these emergent firms recognize host country stakeholders as an audience for concern when conducting OFDI. 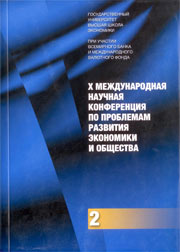 Russian Firms: Business Environment, Internal Organization and Behavior // In «Russia e Europa dell’Est: Progetti e prospettive di crescite»
Dolgopyatova T. G. Serie di Studi Scentifici. University of Verona: Polo Scientifico Diddattico «Studi sull’ impresa» and Center for International Studies, 2012. No. 1.
The paper studies recent development in organization and behavior of Russian firms against the background of economic growth, the world crisis and post-crisis recovery. The main focus of the paper is a problem of investment, including foreign direct investment as a key determinant of Russian enterprises restructuring and modernization. In the context special attention was paid to description of external economic and institutional conditions for development of Russian firms, and their internal characteristics as stock ownership, corporate governance and behavior. The paper concludes with discussions of post-crisis prospects and economic policy matters.
Структура иностранных инвестиций
Арефьева А. И. Научные доклады лаборатории макроэкономического анализа. WP12. Высшая школа экономики, 2011. No. 04.
The paper examines the influence of the size of a firm on the investor’s choice between foreign direct and foreign portfolio investment. The foreign direct investment (FDI) is more efficient due to stronger control rights of the investor. But foreign portfolio investment (FPI) is more liquid. The size of the firm brings about additional concerns regarding the FPI vs FDI trade-off. First, large firms have an attractive feature: the government has an incentive to support large firms who face bankruptcy in order to avoid the harmful consequences of their failure for the economy. On the other hand, large FDI firms are more vulnerable to expropriation or nationalization, at least in countries with poor protection of property rights and weak democratic institutions. In the model higher degree of support from the government to big firms results in higher investment in FPI relative to FDI for bigger firms. The preliminary empirical evidence based on the World Bank Survey of Productivity and Investment Climate** supports the hypothesis of positive relationship between size of the firm and FPI investment.
Антропо-техногенная деградация биосферы: предложения по ее преодолению: Труды Российской междисциплинарной научно-практической конференции (2 июня 2014 г., Москва, ИНИОН РАН)
Edited by: Д. Ефременко, В. Герасимов М.: ИНИОН РАН, 2014.
Управление корпоративной социальной ответственностью в компаниях, ориентированных на устойчивое развитие
Бояров А. Д. Финансы: теория и практика. 2011. № 5. С. 61-66.

This report presents the recent development of manufcaturing subsidiaries of multinational corporations in Russia and indicates some promising opportunities of their development.

The role of foreign direct investment initiatives is pivotal to effective enterprise development. This is particularly vital to emerging economies that are building their presence in international business markets.

"Outward Foreign Direct Investment (FDI) in Emerging Market Economies" is a comprehensive source of academic material on the progressive impact of investment opportunities in the context of developing nations. Highlighting pivotal research perspectives on topics such as trade, sourcing strategies, and corporate social responsibility, this book is ideally designed for academics, practitioners, graduate students, and professionals interested in the economic performance of emerging markets.

The  game-theoretic  model  developed  in  this  article  formulates  the  conditions  required  for  the  incorporation  the  corporate  social  responsibility  (CSR)  policy  into  the  business  as  a  mechanism  of  signaling.  The  model  is  based  on  the  following  principles:  the  Cournot  model,  the  segmentation  of  consumers  by  their  health  deterioration  risk  attitude,  the  choice  about  CSR  strategy  by  producers  of  low  and  high  quality  of  food  products.  Results  of  the  model  show  that  the  nonoccurrence  of  CSR  in  Russia  is  subject  to  the  small  share  of  health-conscious  consumers  and  the  lack  of  support  and  regulation  of  the  state.