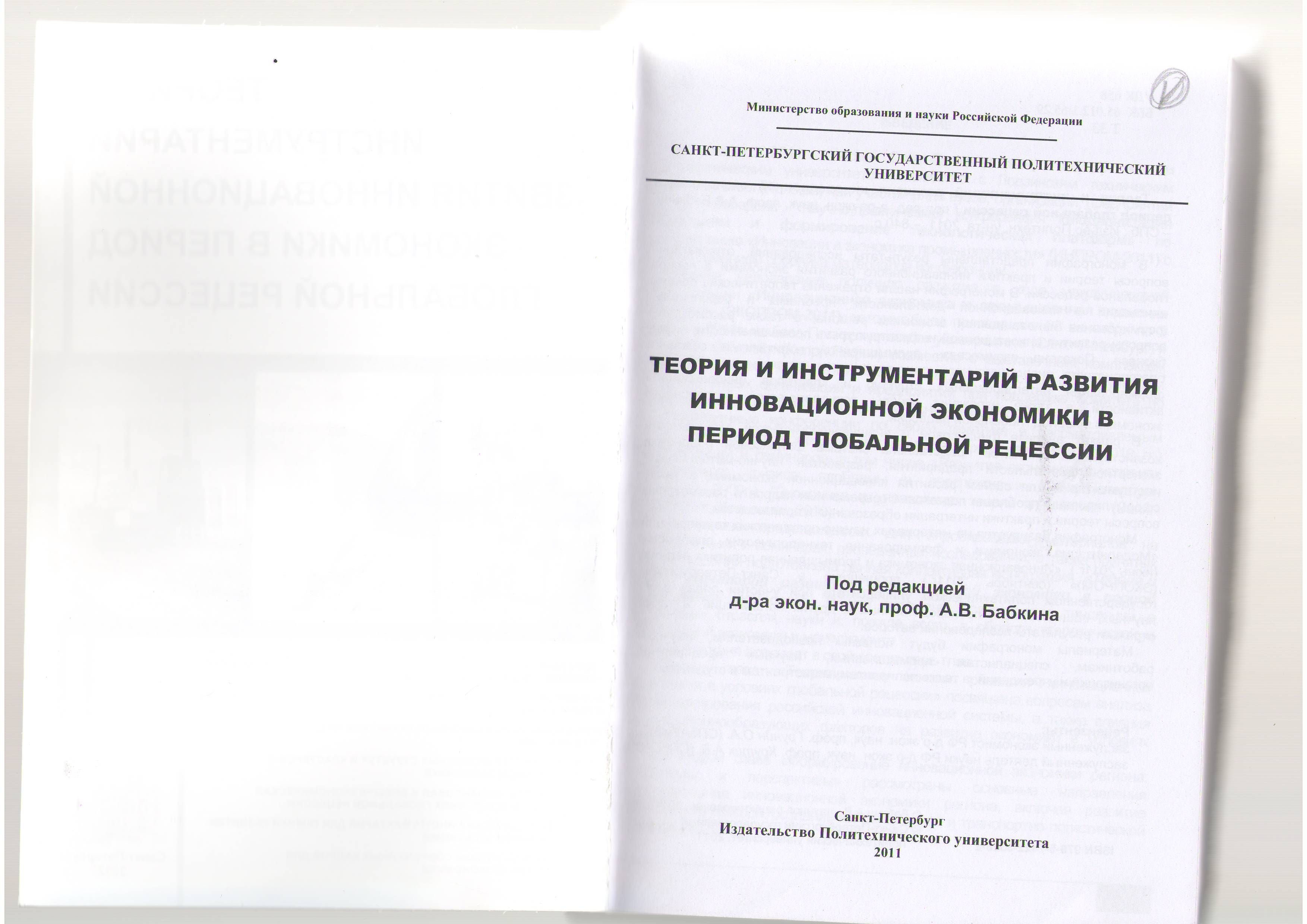 Теория и инструментарий развития инновационной экономики в период глобальной рецессии
Edited by: А. В. Бабкин СПб.: Издательство Санкт-Петербургского политехнического университета, 2011.
Similar publications
Cyclically Balanced Growth Paths in a Model of Economic Growth with Endogenous Policy Switching
Akhremenko A. S., Petrov A., Yureskul E. Economics/EC. WP BRP. Высшая школа экономики, 2015. No. 109/EC/2015.
This paper deals with a model of economic growth, which we expand to include endogenous policy switching based on retrospective voting. It is shown that under certain conditions the solution has a special form that we call a cyclically balanced growth path. This type of solution is an analogue to balanced growth paths, which often occur in growth models with constant policies. Cyclically balanced growth paths are investigated analytically, and the growth rate over the cycle has been found. Results of numerical experiments are also provided and possible empirical applications of the model are outlined
Frontiers of Entrepreneurship Research
Vol. 32. Bk. 15: Sustaining entrepreneurship in “unsustainable communities”: Informal investment rates in England across the business cycle. Iss. 15: Environment. Babson College Entrepreneurship, 2012.

Economic efficiency as a model of the social context of the conceptualization of the law
Tretyakov S. V. Law. LAW. Высшая школа экономики, 2013. No. 11/LAW/2013.
In the present working paper we have hypothesized an explanation for the fact that the evaluation of the social impact of law is modeled predominantly by the economic efficiency concept. Considering the early stages of the concept’s development, we try to make it more intelligible to the European lawyers.
Интеллектуальная собственность и экономическое развитие регионов: проблемы права и правовой политики в первом десятилетии нового века
Панченко П. Н. Право и государство: теория и практика. 2008. № 9(45). С. 148-149.
Some Thoughts on the Genesis of the Efficiency Concept and Causes of its Contemporary Status in Legal Discourse
Tretyakov S. V. Russian Law Journal. 2013. No. 1. P. 26-38.

of the social impact of law is modeled predominantly by the economic efficiency concept.

Considering the early stages of the concept’s development, we try to make it more

intelligible to the European lawyers.

Electron bunching processes in a carcinotrode (backward_wave oscillator with self_modulation of electron emission) operating in the high_efficiency regime determined previously are investigated. The possibility of obtaining an efficiency of about 80% is explained from the physical viewpoint.

Efficiency and Probabilistic Properties of Bridge Volatility Estimatort
Saichev A. I., Lapinova S. A., Tarakanova M. V. SSRN Working Paper Series. Social Science Research Network, 2012. No. id2026389.
We discuss efficiency of the quadratic bridge volatility estimator in comparison with Parkinson, Garman-Klass and Roger-Satchell estimators. It is shown in particular that point and interval estimations of volatility, resting on bridge estimator, are considerably more efficient than analogous estimations, resting on Parkinson, Garman-Klass and Roger-Satchell one.
The Electrode Gamble (A, B)
Plotnikov M. In bk.: Cases in Management (Strategy and General Management). Mumbai: ET CASES, 2015. P. 69-74.

The case addresses the problems of managing strategic change in a small business company Kislorod Plus (Niznhny Novgorod, Russia) – a local trader of welding equipment. The story starts with firing the company’s executive, who took a number of dramatic mistakes, and thus failed implementing corporate strategy, ruined the economy of the firm, and created a significant threat of bankruptcy. Notwithstanding all the problems of the heavy crisis, the company and the situation still have a number of opportunities that are to be recognized and pursued in order to save the business and lead the company to prosperity.