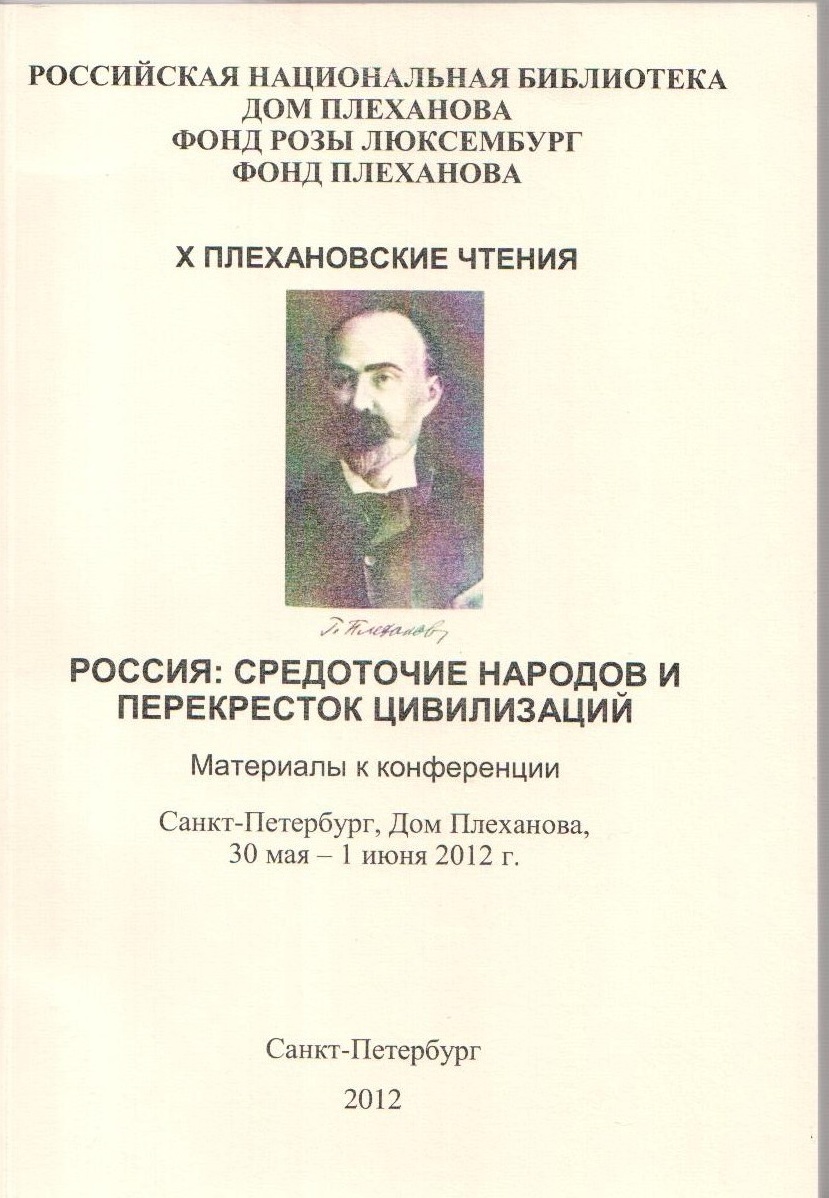 Х Плехановские чтения. Россия: средоточие народов и перекресток цивилизаций. Материалы к конференции. Санкт-Петербург, Дом Плеханова, 30 мая - 1 июня 2012 г.
Филимонова Т. СПб.: 2012.
Similar publications
Nationalism in the USSR: A historical and comparative perspective
Scherbak A. N. Sociology. SOC. Высшая школа экономики, 2013. No. WP BRP 27/SOC/2013.
The late 1980s and early 1990s were characterized by the sudden rise of nationalist movements in almost all Soviet ethnic regions. It is argued that the rise of political nationalism since the late 1980s can be explained by development of cultural nationalism in the previous decades, as an unintended outcome of communist nationalities policy. Soviet political and cultural nationalism is studied in historical and comparative perspective. All ethnic regions are examined throughout entire history of the Soviet Union (49 regions, 1917-91), using the structural equation modeling approach. This paper aims to make at least three contributions in the field. Firstly, it is a methodological contribution for studying nationalism: a ‘quantification of history’ approach. Quantitative values are assigned to historical trends and events. Having constructed variables from historical data, I use conventional statistical methods like SEM. Secondly, this paper contributes to the theoretical debate about the role of cultural autonomy in multiethnic states. The results rethink the notion of ‘cultural autonomy’ as solution of interethnic conflict. Cultural nationalism matters, it indirectly reinforces political nationalism. In both cases concessions in the cultural domain has not stopped the growth of political nationalism in the late 1980-s. Finally, the paper statistically proves that the break between early Soviet and Stalinist nationalities policy explains the entire Soviet nationalities policy. In fact, the late Soviet nationalities policy was inherited from the Stalin’s rule period. This finding revealed in other studies now gets statistical evidence
Петр Алексеевич Кропоткин
Дамье В. В. М.: Российская политическая энциклопедия, 2012.
Идеи Кропоткина и международное анархистское движение в 1920-1930-х гг.
Дамье В. В. В кн.: Петр Алексеевич Кропоткин. М.: Российская политическая энциклопедия, 2012. С. 266-299.
Beria and Khrushchev: The Power Struggle Over Nationality Policy and the Case of Latvia
Loader M. Europe-Asia Studies. 2016. Vol. 68. No. 10. P. 1759-1792.
Towards the First Far Eastern Republic: Regionalism, Socialism, and Nationalism in Pacific Russia, 1905–1918
Sablin I. Humanities. HUM. Basic Research Programme, 2017. No. 142.
The working paper offers a new interpretation of the intellectual and political genealogies of the Far Eastern Republic (1920–1922). The working paper demonstrates that the Far Eastern Republic was not a new project, as a similar formation was first proclaimed on April 10, 1918, in Khabarovsk as an autonomy within the Soviet Russian Republic under the name of the Soviet Republic of the Far East in line with the resolutions of the Third All-Russian Congress of Soviets. The Soviet Republic of the Far East was a product of regionalist and nationalist discourses and built on the ideas of decentralization which were widely discussed since the First Russian Revolution (1905–1907) by liberals and socialists alike and began to be implemented after the February Revolution (1917). The Chernobyl-born and Chicago-educated Bolshevik Aleksandr Mikhailovich Krasnoshchekov, who led the establishment of the Far Eastern Republic in 1920, also headed the Soviet Republic of the Far East in 1918. Its government, the Far Eastern Council of People’s Commissars (Dal’sovnarkom) defied the authority of the Central Executive Committee of Siberian Soviets (Tsentrosibir’) and disobeyed the Moscow central government implementing thereby a regionalist approach to Soviet federalism. Krasnoshchekov’s project relied on the ideas of the Populists (Narodniki), the Socialist Revolutionaries, and the Social Democrats which were tested in the Russian Far East during the First Russian Revolution and the interpretations of Far Eastern history and interests which were put forward by regional deputies in the Russian State Duma. The formation of the first Far Eastern republic was facilitated by the activities of Deputy of the Fourth Duma and Commissar of the Provisional Government for the Far East Aleksandr Nikolaevich Rusanov who led the formation of a regional organization uniting democratically elected zemstvo and municipal self-government bodies.
Empire Speaks Out: Languages of Rationalization and Self-Description in the Russian Empire
Semyonov A., Gerasimov I., Mogilner M. et al. Vol. 1. Boston; Leiden: Brill, 2009.

The diverse and contested nature of the contemporary skinhead scene makes it impossible to identify a single common body regime, or set of gender norms, characteristic of the skinhead (sub)culture. This chapter explores one example of how these fraternal bonds and spaces are constituted. It pays particular attention to practices of the body (individual and collective) within the group and how these practices were enacted to confirm its skinhead identity while shaping a particular regime of closeness and intimacy. It considers, firstly, the group as a particular form of fraternity based on homosocial bonds of friendship, closeness and (dis)trust. Secondly, the aesthetics and the ethics of intimacy within the group are discussed. In particular practices of displaying the – naked and bare – body of the skinhead are considered as well as tests of, and conflicts over, the meaning of the intimacies that these practices forge. Finally, the chapter explores these practices in the context of the wider and competing masculinities through which they are enacted.