The chapter, based on the field research among week-end pilgrims, argues that the overage Orthodox believer in contemporary Russia in not a churchgoer and arrangers her religious life outside the church. Instead of acquiring religious knowledge and language under the supervision of the church, the new believers have created their own mode of religiosity by drawing upon their previous experiences (such as heritage tourism) and beliefs (such as bio-energy healing etc). The research shows that a longing for authenticity has been a central part of the construction of new identities in Russia, and this process has been expressed in the language of Orthodox Christian tradition, as people know this language in their post-Soviet present. 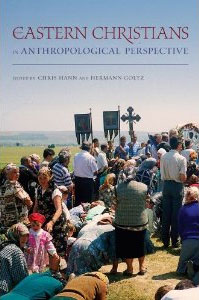 Eastern Christianities in Anthropological Perspective
Edited by: C. Hann, H. Goltz. Iss. 9. Berkeley; Los Angeles; L.: University of California Press, 2010.
Similar publications
Russian Saint under Construction: Portraits and Icons of Starets Nikolay
Kormina J. Humanities. HUM. Basic Research Programme, 2012. No. 04.
The article analyzes the process of creation and promotion of a new type of saints, the so-called startsy (the elders), which emerged in the Russian Orthodox Church at the end of the 1990s. It focuses on debates about the “styles” of sanctity addressed by the term starets that are supported by different groups of believers. These groups support different strategies to articulate the charisma embodied in starets in terms of its legitimization and characteristics. The article studies these tendencies, using as an example the “career of starets” of the village priest from a remote island in the Pskovskoe lake, which is located 30 km from the Russian-Estonian border. First, I will outline the field of meanings ascribed to the term starchestvo. Then, I will analyze the three-stage “biography of starets Nikoly”, focusing on the ways that his devotees articulate his charisma.
Образ реального и идеального дома как модератор позитивного функционирования личности
Нартова-Бочавер С. К., Резниченко С. И., Брагинец Е. И. и др. Социальная психология и общество. 2015. Т. 6. № 6. С. 9-22.
Believers’ Letters of Advertising: St Xenia of Petersburg’s ‘National Reception Centre’
Kormina J. V., Shtyrkov S. In bk.: Russian cultural anthropology after the collapse of communism. Iss. 34. Berkeley; Los Angeles; L.: London and new York, 2012. Ch. 7. P. 155-182.

The chapter focuses on one of the ways to communicate with the sacred popular among contemporary Russian Orthodox believers – written appealing to the saints (letters and notes). Although not happy at all about this habit, the Church managers allow to publish these letters in the parish newspapers and web-sites and in other church mass-media. Analysis of publications of the letters addressed to Saint Xenia of Petersburg proves that the Church publishes them as a part of its advertising campaign targeted on those people who prefer irregular religiosity (pilgrimages, letters to the saint, etc) to traditional regular parish life. The chapter develops Peter Berger’s metaphor of religious market.

In this book the author explores the social, economic and legal status of the Russian lower clergy (priests, deacons and sacristans), its role in the parish life and the institutional history of the Russian parish in the 16-17th centuries. The institution of proprietary or private churches (German Eigenkirchenwesen) is analysed and compared with the analogous phenomena in Byzantium and Western and Central Europe. Special attention is given to state legislation and policy, which influenced the status of the lower clergy, and the formation of the clerical estate (dukhovnoe soslovie). Various sources have been examined: the tsar’s immunity charters, cadastres, private contracts, letters, literary works, materials from the archives of the bishop’s chancelleries etc.