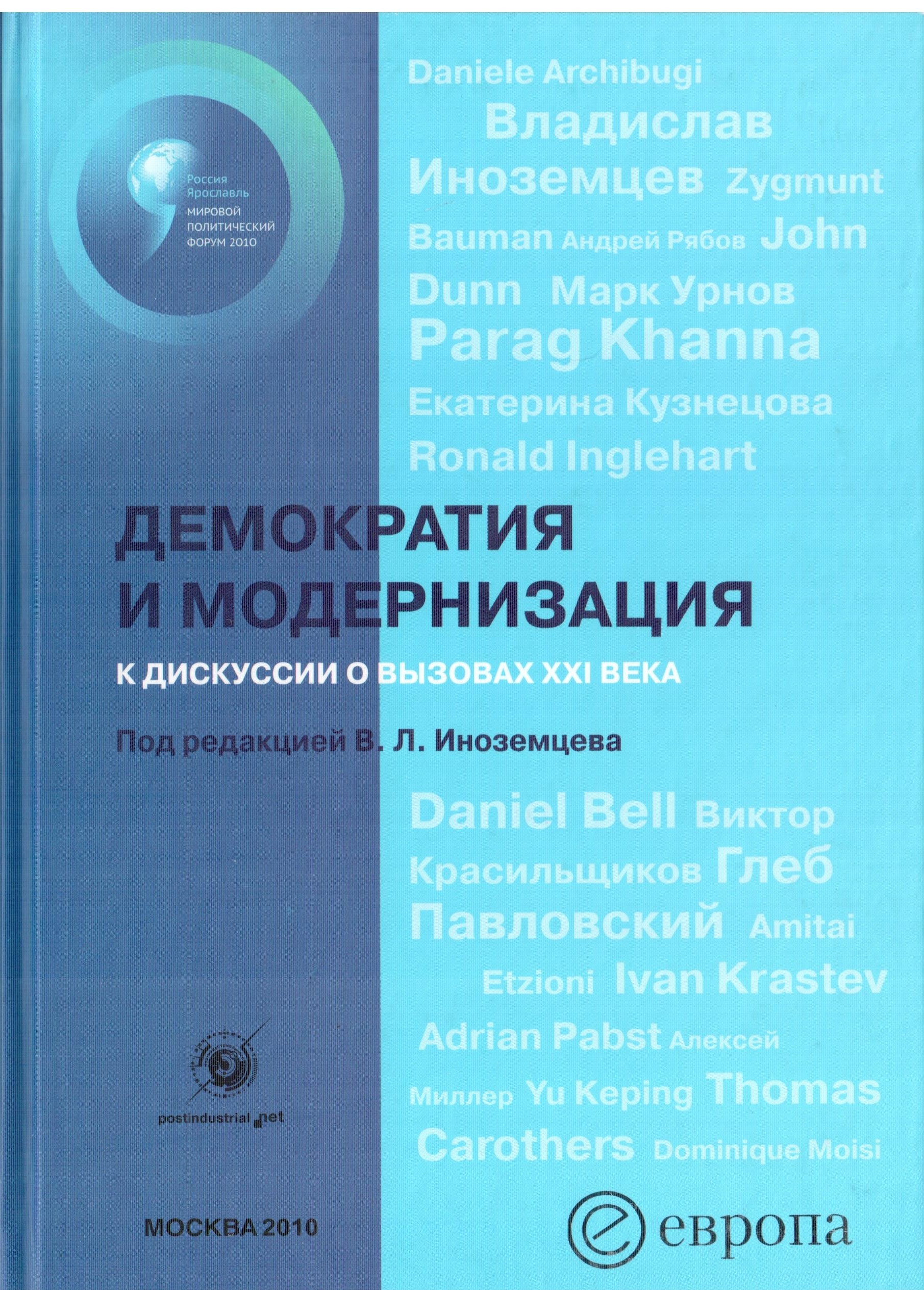 Процессы демократизации и Южная Азия
Лунев С. И. В кн.: Разговор с Мариной и Олегом Плешовыми: политические символы и реалии Южной Азии. М.: Восточная литература, 2010.
Содействие развитию демократии – путь к публичной политике
Горный М. Б. В кн.: Публичная политика – 2005. СПб.: НОРМА, 2006. С. 56-61.
Модернизация общества — важнейшая задача России
Маргания О. Л. В кн.: Пути модернизации: траектории, развилки и тупики. Международные сравнительные измерения. СПб.: Издательство Европейского университета в Санкт-Петербурге, 2010. С. 7-10.
Trajectories of Regime Transformation and Types of Stateness in Post-Communist Countries
Melville A. Y., Mironyuk M., Stukal D. Political Science. PS. Высшая школа экономики, 2012. No. 02.
It is commonplace that a sovereign state is a prerequisite to democracy. But not all states are alike, each having different resources, capacities, priorities, properties, and so forth. What kinds of states and what particular features are conducive to democracy or autocracy? How do different types of stateness and their dynamics relate to different trajectories of regime transformation in post-communist countries? In light of the significant debate in comparative politics regarding the importance of structural and procedural (actor-oriented) factors in democratization and democratic consolidation, we address the effect of stateness on regime transformations in a broad framework, allowing us to specify the role of structural conditions and the decisions of key political actors in post-communist regime change. The focus of this research is empirical, implementing a combination of qualitative comparative and multivariate statistical methods in order to study a sample of post-communist countries from the two past decades. This Working Paper is an output of a research project implemented as part of the Basic Research Program at the National Research University Higher School of Economics.
Опыт перехода стран Восточной Европы к демократии
Денчев К. София: Софийский университет Св. Климента Охридского, 1998.
Institutional Deficit and Health Outcomes in Post-Communist States
Rosenberg D., Kozlov V. A. Political Science. PS. Высшая школа экономики, 2015. No. 25/PS/2015.
In this paper we explore political-economic determinants of health. We draw upon the unique natural experiment of post-communist transitions to show the effect on health (measured as life expectancy and cause-specific mortality) of the interaction between institutions for political (democratic rules) and economic (free market entry) competitiveness. To analyze this relationship empirically, we employ panel regression analysis with country and time fixed effects. We find that, ceteris paribus, political and economic institutions exert cumulative positive impact upon health (even if their separate effects are negative or insignificant). One potential causal pathway is that political-economic liberalization increases certainty and people start investing in their health. Our findings are highly relevant to other countries that experience similar reforms.
Роль культуры в демократическом транзите
Урнов М. Ю. Общественные науки и современность. 2011. № 6. С. 5-17.