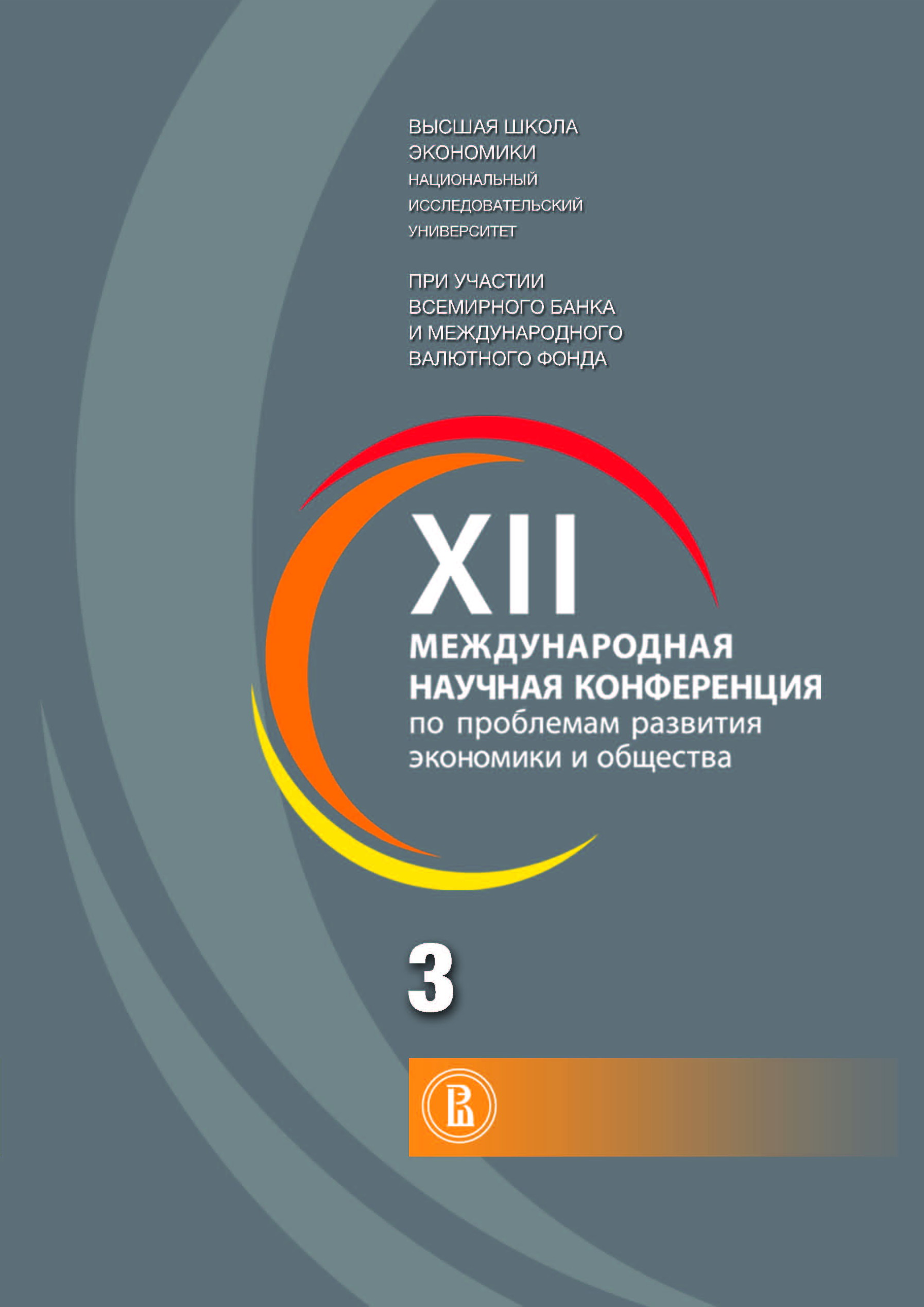 XII Международная научная конференция по проблемам развития экономики и общества. В четырех книгах. Книга 3.
Edited by: Е. Г. Ясин Кн. 3. М.: Издательский дом НИУ ВШЭ, 2012.
Similar publications
Cyclically Balanced Growth Paths in a Model of Economic Growth with Endogenous Policy Switching
Akhremenko A. S., Petrov A., Yureskul E. Economics/EC. WP BRP. Высшая школа экономики, 2015. No. 109/EC/2015.
This paper deals with a model of economic growth, which we expand to include endogenous policy switching based on retrospective voting. It is shown that under certain conditions the solution has a special form that we call a cyclically balanced growth path. This type of solution is an analogue to balanced growth paths, which often occur in growth models with constant policies. Cyclically balanced growth paths are investigated analytically, and the growth rate over the cycle has been found. Results of numerical experiments are also provided and possible empirical applications of the model are outlined
Стала ли Россия демократией?
Нисневич Ю. А. Россия и современный мир. 2012. № 1. С. 52-64.
Procedural destination of political and public components of polyarchic democracy lies in the provision of political, informational and. On the whole, social competition. Only high quality functioning of democratic norms can ensure permanent political and civil control over public administration which is a key condition of effective counteracting and suppressing corruption.
Adaptation strategies of the Roman Catholic and Russian Orthodox Churches to the new social and political conditions in the last decades
Bogachev M. In bk.: Morality and ethics in an innovative society: business, politics, media. M.: Academia - APK & PPRO, 2013. P. 31-43.

Values and religion in adolescent development: Cross-national and comparative evidence
Schwartz S. In bk.: Values, religion, and culture in adolescent development. NY: Cambridge University Press, 2012. P. 97-122.
(Re-)Bulding the Ship of State at Sea? State Capacity and Regime Dynamics in Post-Communist Countries
Melville A. Y., Stukal D. Political Science. PS. Высшая школа экономики, 2012. No. 07.
The relationship between  stateness and state capacity, on the one hand, and  political regimes and their dynamics, on the other,  has  received  increasing attention in  comparative politics  in recent years. Though empirical research does not provide consistent findings, arguments  currently  under discussion vary from “stateness first” (democratization only after effective state-building) to “building or rebuilding  the ship of state while at sea” (state-building and democratization as complements). Several studies reveal a J-curve link connecting autocracy and  democracy to levels of state capacity,  implying that autocratic regimes have higher state capacity than hybrid ones. This paper questions  these claims and reveals that democratization may start at low levels of state capacity, although democratic consolidation occurs at high levels of state capacity. Using a post-Communist sample, we reveal no J-shaped relationship between state capacity and political regime. We also show that state capacity does not remain unchanged in periods of social and political upheavals and its dynamics in numerous cases stipulate changes in the level of democracy. Particular patterns of this relationship are discussed in the paper in the context of clusters of post-Communist regime transformations.
Liberal Imperialism in Europe
Edited by: M. P. Fitzpatrick Бейсингсток: Palgrave Macmillan, 2012.

Нужна ли Китаю политическая реформа для дальнейшего экономического роста и приведет ли дальнейший экономический рост к демократизации политического режима КНР?
Королев А. Н. В кн.: 3-й пленум ЦК КПК: новое руководство и стратегия реформ. М.: Учреждение Российской академии наук Институт Дальнего Востока РАН, 2014. С. 1-16.
The paper explores the relationship between economic growth and democratization at both theoretical level and within the context of China’s political reality. It is demonstrated that such relationship is neither linear nor stable, but is rather contingent and variable. There are no scientifically-proved reasons to argue that economic growth leads to democratization, or that democratization helps economy grow. There is nothing surprising that China is successful in reforming its economy without democratizing its political system. It is premature to expect a growthdriven democratization in China. Conversely, it is unjustified to assume that democracy is needed for China’s further economic growth.
Factors of Post-Socialist Stateness
Ilyin M., Khavenson T., Meleshkina E. Y. et al. Political Science. PS. Высшая школа экономики, 2012. No. 03.
Stateness is the capacity of the state to exercise its fundamental functions. The collapse of the socialist system prompted the former USSR countries to „re-invent‟ their stateness. The paper focuses on factors that impede or smooth stateness transformations in post-socialist countries. First, the paper examines internal and external factors of state formation in our selected countries. Next, it introduces empirical research vehicles and empirical findings that present alternative patterns of stateness and outcomes of state formation. The paper concludes with a detailed review of certain cases that may be considered prototypes of state formation for the post-Soviet countries.
Жизненные миры современной российской семьи
Edited by: З. М. Саралиева Н. Новгород: Нижегородский государственный университет им. Н.И. Лобачевского, 2015.
Democracy versus Modernization: a dilemma for Russia and for the world
Edited by: V. L. Inozemtsev, P. Dutkiewicz. NY: Routledge, 2012.