A Stable Alternative to Sinkhorn’s Algorithm for Regularized Optimal Transport

In this paper, we are motivated by two important applications: entropy-regularized optimal transport problem and road or IP traffic demand matrix estimation by entropy model. Both of them include solving a special type of optimization problem with linear equality constraints and objective given as a sum of an entropy regularizer and a linear function. It is known that the state-of-the-art solvers for this problem, which are based on Sinkhorn’s method (also known as RSA or balancing method), can fail to work, when the entropy-regularization parameter is small. We consider the above optimization problem as a particular instance of a general strongly convex optimization problem with linear constraints. We propose a new algorithm to solve this general class of problems. Our approach is based on the transition to the dual problem. First, we introduce a new accelerated gradient method with adaptive choice of gradient’s Lipschitz constant. Then, we apply this method to the dual problem and show, how to reconstruct an approximate solution to the primal problem with provable convergence rate. We prove the rate$$O(1/k^2)$$, k being the iteration counter, both for the absolute value of the primal objective residual and constraints infeasibility. Our method has similar to Sinkhorn’s method complexity of each iteration, but is faster and more stable numerically, when the regularization parameter is small. We illustrate the advantage of our method by numerical experiments for the two mentioned applications. We show that there exists a threshold, such that, when the regularization parameter is smaller than this threshold, our method outperforms the Sinkhorn’s method in terms of computation time. 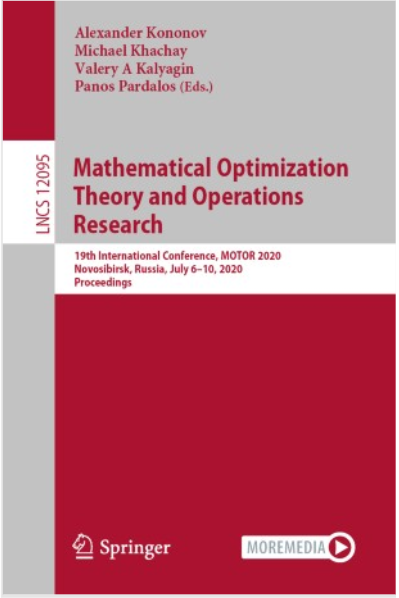 Mathematical Optimization Theory and Operations Research, 19th International Conference, MOTOR 2020, Novosibirsk, Russia, July 6–10, 2020, (Т. 12095)
Cham: Springer, 2020
Similar publications
Universal Method of Searching for Equilibria and Stochastic Equilibria in Transportation Networks
Baimurzina D., Gasnikov A., Dvurechensky P. et al., Computational Mathematics and Mathematical Physics 2019 Vol. 59 No. 1 P. 19-33
A universal method of searching for usual and stochastic equilibria in congestion population games is proposed. The Beckmann and stable dynamics models of an equilibrium flow distribution over paths are considered. A search for Nash(–Wardrop) stochastic equilibria leads to entropy-regularized convex optimization problems. Efficient solutions of such problems, more exactly, of their duals are sought ...
Instances generation for a single machine scheduling problem
Lazarev A. A., Правдивец Н. А., Grishin E. et al., Journal of Physics: Conference Series 2021
The branch and bound method is used to obtain exact solutions of the single machine scheduling problem with the objective function of maximum lateness minimization. Lower bounds are estimated by solving dual problems. A machine-independent value, namely the number of branching points in the search tree, is used as the complexity index of instances. The ...
Decentralized and parallel primal and dual accelerated methods for stochastic convex programming problems
Dvinskikh D., Gasnikov A., Journal of Inverse and Ill-posed problems 2021 Vol. 29 No. 3 P. 385-405
We introduce primal and dual stochastic gradient oracle methods for decentralized convex optimization problems. Both for primal and dual oracles, the proposed methods are optimal in terms of the number of communication steps. However, for all classes of the objective, the optimality in terms of the number of oracle calls per node takes place only ...
Primal–dual accelerated gradient methods with small-dimensional relaxation oracle
Gasnikov A., Dvurechensky P., Optimization Methods and Software 2020 P. 1-38
In this paper, a new variant of accelerated gradient descent is proposed. The proposed method does not require any information about the objective function, uses exact line search for the practical accelerations of convergence, converges according to the well-known lower bounds for both convex and non-convex objective functions, possesses primal–dual properties and can be applied ...
Accelerated and Unaccelerated Stochastic Gradient Descent in Model Generality
Dvinskikh D., Tyurin A., Gasnikov A. et al., Mathematical notes 2020 Vol. 108 No. 3-4 P. 511-522
A new method for deriving estimates of the rate of convergence of optimal methods for solving problems of smooth (strongly) convex stochastic optimization is described. The method is based on the results of stochastic optimization derived from results on the convergence of optimal methods under the conditions of inexact gradients with small noises of nonrandom ...
Universal intermediate gradient method for convex problems with inexact oracle
Gasnikov A., Dvurechensky P., Optimization Methods and Software 2020 P. 1-28
In this paper, we propose new first-order methods for minimization of a convex function on a simple convex set. We assume that the objective function is a composite function given as a sum of a simple convex function and a convex function with inexact Hölder-continuous subgradient. We propose Universal Intermediate Gradient Method. Our method enjoys ...
On the Dual and Inverse Problems of Scheduling Jobs to Minimize the Maximum Penalty
Lazarev A. A., Правдивец Н. А., Werner F., Mathematics 2020 Vol. 8 No. 7 P. 1131
In this paper, we consider the single-machine scheduling problem with given release dates and the objective to minimize the maximum penalty which is NP-hard in the strong sense. For this problem, we introduce a dual and an inverse problem and show that both these problems can be solved in polynomial time. Since the dual problem ...
Solving Smooth Min-Min and Min-Max Problems by Mixed Oracle Algorithms
Gladin E., Sadiev A., Gasnikov A. et al., Communications in Computer and Information Science 2021 Vol. 1476 P. 19-40
In this paper, we consider two types of problems that have some similarity in their structure, namely, min-min problems and min-max saddle-point problems. Our approach is based on considering the outer minimization problem as a minimization problem with an inexact oracle. This inexact oracle is calculated via an inexact solution of the inner problem, which ...
Primal-Dual Method for Searching Equilibrium in Hierarchical Congestion Population Games
Dvurechensky P., Gasnikov A., Gasnikova E. et al., В кн.: Proceedings of DOOR 2016 Conference, special issue of CEUR Workshop Proceedings. Vol. 1623.: CEUR Workshop Proceedings, 2016.. С. 584-595.
In this paper, we consider a large class of hierarchical congestion population games. One can show that the equilibrium in a game of such type can be described as a minimum point in a properly constructed multi-level convex optimization problem. We propose a fast primal-dual composite gradient method and apply it to the problem, which ...
A characterization of maximin tests for two composite hypotheses
Gushchin A. A., Mathematical Methods of Statistics 2015 Vol. 24 No. 2 P. 110-121
We consider the problem of testing two composite hypotheses in the minimax setting. To find maximin tests, we propose a new dual optimization problem which has a solution under a mild additional assumption. This allows us to characterize maximin tests in considerable generality. We give a simple example where the null hypothesis and the alternative are strictly separated, ...