This paper suggests that Soviet communicative control was based on a particular balance between the manipulation of mass communication (propaganda) and restriction of interpersonal communication and particular elements of social mobility control (e.g. transport, postal communication and population localization). This particular balance formed a quite stable social structure in which social communications reinforced the state order and hierarchy. We argue that, to a great extent, some elements of this Soviet system of control are reproduced in the current Russian media and social system that has formed a passive attitude towards digital activism and to political life in general among the population. This phenomenon has significantly influenced the contemporary post-Crimean social consensus and caused the failure of the protest movement at the first half of 2010s, which was largely dependent on social media. 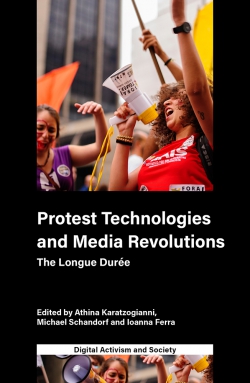 This book provides a comprehensive analysis of the ways in which new media technologies have shaped language and communication in contemporary Russia. It traces the development of the Russian-language internet (Runet) from late-Soviet cybernetics to the advent of Twitter and explores the evolution of web-based communication practices, showing how they have both shaped and been shaped by social, political, linguistic and literary realities. Throughout the volume, leading Runet scholars draw attention to features and trends that are characteristic of global new media, as well as those that are more specific to Russian media culture.

This paper investigates the relationship between the Russian government and mass media businesses. With the state ownership monopoly in the past, transitioning countries do not have evolutionary experience of enforcing corporate law, transparency or protecting minority shareholder rights, and balanced response to stakeholder interests. These represent formal valuable instruments of formal economy. We examine Russia’s recent developments in ownership structure in mass media industries based on insider information – semi-structured interviews with owners and/or top managers of mass media companies from Russian regions, capital cities, and also freelancers who are not affiliated with traditional media companies. With consensus to principles of democratic developments, the share of the state ownership and non-related businesses in Russia’s mass media capital decreased dramatically. Does it mean that mass media companies are becoming independent from the state and oligarchs? We argue that it is still far from being true, and informal pressures and controls over mass media have been developed and are widely used in Russia. We state that loyalty to state/municipal/regional powers (lobbying of their interests) helps these companies to compete against “independent” media. This erosion of principles of independence of mass media in Russia is the result of a corrupted governance model.

St. Petersburg is home to the discussion club Polit-Gramota. The club sees itself as an alternative public space that offers young people the opportunity to discuss politics and society freely. At the same time, they acquire the skills needed for a career in journalism, civil society, and politics. Even at the height of the political polarisation that accompanied the mass protests against election fraudin the winter of 2011-12, Polit-Gramota was able to maintain its neutrality and guarantee pluralism. This protects free spaces for expression in an authoritarian state and lets young people, who are ignored in mainstream politics, be heard.

The social and community driven aspects of our digital lives continue to rapidly increase, resulting in transformative behaviors and, significantly, publishing and distributing huge amounts of fascinating data. The seventh meeting of the International AAAI Conference on Weblogs and Social Media (ICWSM-13) held in Cambridge, Massachusetts, promised to be a benchmark year for ICWSM. Thanks to the enthusiastic participation of our community, we received a record number of submissions, with a growth of 50 percent over the previous year. More than the quantity, however, the high quality of the submitted papers is the truest evidence that ICWSM is maturing in its role as a premier venue for social media research.

In recent decades, the biennial has become the most widespread mode of showcasing contemporary art. Rather than acting as mere aesthetic containers, these shows aspire to be socially relevant by raising questions about capitalism, colonialism, inequality, environmental devastation, and gender imbalances. In this chapter, we draw from ethnographic observation of the 7th Berlin Biennale (2012) that took place in the context of a rising anti-capitalist discourse reflected in the Occupy movement and the movement of the squares. We explore the outcome of curators’ attempts to disrupt existing practices by introducing the logic of activism. Drawing from empirical vignettes, we identify three institutional rationales that coexisted, clashed, and mutually displaced this logic, reaffirming rather than disrupting the idea that art has to preserve some distance from social reality, that neo-anarchist activism should prefigure social reality in the here and now, and that the configuration of the above through the organization’s politics of visibility that promotes the spectacle of the Berlin Biennale and itself as a brand. These three rationales concomitantly and decisively structured the event’s public performance and turned the idea of linking art to activism into the spectacle of a human zoo. We discuss our findings and link the micro-institutional logics to broader macro-level logics of aesthetic capitalism and spectacle.