Human memory is not a literal record of our experiences but a fallible and malleable cognitive process. Because of the reconstructive nature of memory, we are often prone to accept false events and recall them as truthful (Bartlett, 1932). One easy and reliable method to create and study false memories in the laboratory is the misinformation paradigm. In this paradigm participants are presented with a story (original information). After some time, parts of this story are presented again but now including some modifications (misinformation). Finally, the memory is measured for the original information, the misinformation, and, as control, some other incorrect information never presented before. The misinformation effect occurs when the percentage of misinformation accepted is higher than the acceptance of control incorrect information. This effect has been largely studied in relation to its applied relevance in eyewitness testimony research. Yet, the neural substrates and temporal dynamics of processing correct and false information remain scarcely studied. In this study the neural activity was recorded using EEG while participants performed a memory recognition test which comprised misinformation, true, and simply incorrect items. The only previous EEG study on neural correlates focused on misinformation pointed to the P3b and LPC (late positive component) ERPs components as the key to distinguishing between memories for correct and false memories. High P3b is linked with a strong match between the expectation and the stimuli presented. LPC is a late component around 400 to 800 ms after the stimulus presentation, associated with the recollection of accurate information.
Our results show that for the contrasts of misinformation accepted vs rejected, and false information accepted vs rejected (correct rejections), P3b was significantly more positive when the inaccurate information was accepted. These differences suggest a larger cognitive workload on accepting this type of information than when it is correctly rejected. Furthermore, in both contrasts we found differences in P600 which is linked to reprocessing of detected anomalies in the input. Here, we found a more expressed P600 for accepted than for rejected misinformation. P600 was also stronger for correct rejections than false alarms. In this latter case, the higher P600 amplitude may reflect the detection and reanalysis of the rejection of this false information. Interestingly, in the case of acceptance of misinformation, the higher P600 amplitude suggest that participants are not totally blind to the inaccuracy of the misinformation, though still they accept it.

The work was supported by the Russian Science Foundation (project №19-18-00534). 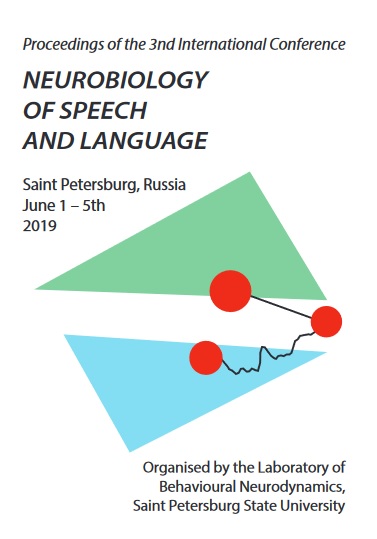 The article is dedicated to neural basis of verb processing. Three verb groups were analysed: abstract, tool action and hand action verbs. We found that imageability of a verb might influence both the time of its processing and the amount of cerebral activation it is related to.

Increasing evidence suggests that neuronal communication is a defining property of functionally specialized brain networks and that it is implemented through synchronization between population activities of distinct brain areas. The detection of long-range coupling in electroencephalography (EEG) and magnetoencephalography (MEG) data using conventional metrics (such as coherence or phase-locking value) is by definition contaminated by spatial leakage. Methods such as imaginary coherence, phase-lag index or orthogonalized amplitude correlations tackle spatial leakage by ignoring zero-phase interactions. Although useful, these metrics will by construction lead to false negatives in cases where true zero-phase coupling exists in the data and will underestimate interactions with phase lags in the vicinity of zero. Yet, empirically observed neuronal synchrony in invasive recordings indicates that it is not uncommon to find zero or close-to-zero phase lag between the activity profiles of coupled neuronal assemblies. Here, we introduce a novel method that allows us to mitigate the undesired spatial leakage effects and detect zero and near zero phase interactions. To this end, we propose a projection operation that operates on sensor-space cross-spectrum and suppresses the spatial leakage contribution but retains the true zero-phase interaction component. We then solve the network estimation task as a source estimation problem defined in the product space of interacting source topographies. We show how this framework provides reliable interaction detection for all phase-lag values and we thus refer to the method as Phase Shift Invariant Imaging of Coherent Sources (PSIICOS). Realistic simulations demonstrate that PSIICOS has better detector characteristics than existing interaction metrics. Finally, we illustrate the performance of PSIICOS by applying it to real MEG dataset recorded during a standard mental rotation task. Taken together, using analytical derivations, data simulations and real brain data, this study presents a novel source-space MEG/EEG connectivity method that overcomes previous limitations and for the first time allows for the estimation of true zero-phase coupling via non-invasive electrophysiological recordings.

Attentional lapses affect auditory P2 amplitude
Lazarev I. E., Chernyshev B. V., Osokina E. S. et al. In bk.: 53rd Annual Meeting - Society for Psychophysiological Research, Florence. Poster session. 2013. P. 133-133.
Prestimulus frontal midline theta reflects increased cognitive control during spontaneous lapses of attention
Novikov N., Bryzgalov D. V., Chernyshev B. V. PSYCHOLOGY. WP BRP. Издательский дом НИУ ВШЭ, 2014. No. WP BRP 27/PSY/2014.
Performance errors are well studied under conditions of increased demands for motor inhibition; within this framework, errors are considered to be manifestations of motor conflicts between mutually exclusive responses to stimuli presented. However, tasks that require prolonged exertion of sustained attention and complex stimulus-response mapping may involve somewhat different internal causes of performance errors related to fluctuation in cognitive control; this aspect has not been previously addressed in literature. Specifically, it has not been studied whether performance errors can result from conflicts with spontaneous internally generated task-unrelated processes. In the present study, modulation of prestimulus brain activity in relation to spontaneous performance errors was studied during the auditory condensation task. Frontal midline theta (FMT) power, which is an indicator of cognitive control system activation, was found to be significantly higher before incorrect responses than before correct ones. Relative increase in FMT power before incorrect responses was positively correlated with Strength of excitation (STI questionnaire) and negatively correlated with the percentage of errors and with correct-to-error response time ratio. These findings allow us to suggest that the increase in the prestimulus FMT power before incorrect responses under the condensation task was at least partly related to the adjustment of the cognitive control system and conflict regulation. We speculate that the conflict may arise from interference between task-related and task-unrelated processes such as mind wandering.
Methods of data processing in EEG/MEG/ Applied aspects of magneto- and electroencephalographic neuroimaging
Edited by: A. Butorina. M.: MSUPE, 2013.

The Abstract book contains the abstracts of the posters presentations of the participants of the Methodological school: Methods of data processing in EEg and MEG, Moscow, 16-30th of April, 2013. The School was devoted to the theoretical and practical aspects of the contemporary methods of the dynamic  mapping of brain activity by analysis of multichannel MEG and EEG.

In this research we compare the performance of different data mining techniques in the analysis of electroencephalogram (EEG) data. We study the question od predicting post-comatose neuro-developmental scores based mainly on statistical features of the EEG recordings. We compare results from applying different data mining techniques, such as the Elastic Net, Lasso, Gaussian Support Vector Regression and Random Forest Regression. We also compare the results produced with different matrix completion methods.

The Abstract book contains the abstracts of the posters presentations of the participants of the Methodological school: Methods of data processing in EEG and MEG, Moscow, 16-30th of April, 2013. The School was devoted to the theoretical and practical aspects of the contemporary methods of the dynamic mapping of brain activity by analysis of multichannel MEG and EEG.

Особенности реактивных перестроек ЭЭГ при выполнении двойных задач здоровыми испытуемыми (произвольный позный контроль и счет)
Жаворонкова Л., Жарикова А., Кушнир Е. и др. Физиология человека (перевод). 2011. № 6. С. 1-14.
Sleep-related thalamocortical spindles and delta oscillations are reduced during a ketamine-induced psychosis-relevant transition state
Mahdavi A., Qin Y., Aubry A. et al. BioRxiv. New Results. Cold Spring Harbor Laboratory, 2019
Schizophrenia is a chronic debilitating disease. Sleep disturbances associated with a reduction in spindles are observed as warning signs prior to the first psychotic episode. Every spindle is a short-lasting (~0.5 s) set of bioelectric sinusoidal waves at the frequency of 10-16 Hz generated within the thalamus. Sleep spindles, easily identifiable in a scalp electroencephalogram, occur hundreds of times during sleep and are implicated in cognition like memory processes. For this reason, spindles are seen as an electrobiomarker of the quality of sleep and cognitive performance. In patients at high risk of psychotic transition, the density (number/time unit) of spindles is reduced. The underlying mechanisms of this change are unknown. Glutamate-mediated neurotransmission in the thalamus plays a key role in the generation of spindles and the etiology of schizophrenia. Therefore, we tested the hypothesis that a reduced function of glutamate receptors at the thalamic level is involved in the psychosis-related reduction in spindles. Using cell-to-network neurophysiological methods in sleeping rats, we demonstrate that systemic administration of the NMDA glutamate receptor antagonist, ketamine, significantly decreases spindle density. This effect is consistently prevented by the widely used antipsychotic drug, clozapine. These original findings support the hypothesis of the involvement of a reduced function of NMDA glutamate receptors in the sleep spindle deficit observed in psychosis-related disorders. The present findings lay the foundation for the development of innovative therapies aimed at preventing psychotic, bipolar, and depressive disorders.
Когерентность ЭЭГ при пассивном восприятии линий с различным углом наклона у левшей и правшей
Лукоянов М. В., Крылов В. Н. Вестник Нижегородского университета им. Н.И. Лобачевского. 2012. № 5. С. 135-139.