Emergent Protest Publics in India and Bangladesh: A Comparative Study of Anti-corruption and Shahbag Protests

In India, anti-corruption mass protests began in April 2011 against various aspects of corruption such as kleptocracy, electoral fraud and black money. The protestors demanded the enactment of a strong legislation and enforcement against perceived political corruption. The protestors used non-violent repertoires of civil disobedience such as hunger strikes, marches, and rallies. They used social media to organise, communicate, and spread their message. Initially non-partisan to politics, the mobilisations fought for the Jan Lokpal Bill (introduced in parliament in 2011). Later, the core activist group split into two and one group formed a political party called Aam Aadmi Party (common man’s party). It won the Delhi legislative assembly polls and formed the government. The Lokpal and Lokayukt Act (or the Lokpal Act) was enacted in 2013. This was a major success of the mobilisations. Bangladesh won independence from Pakistan through a bloody war in 1971. During the war, the Pakistan army violated human rights and conducted genocide on a large scale. In 2009, the ruling Awami League government formed an International Crime Tribunal to put alleged war criminals to trial. In 2010, the Tribunal delivered its first indictment against groups considered enemy ‘collaborators’ and ‘traitors’ (Razakars, Al Badr, and Al Sham). But the indictments divided the country into seculars (who embraced the Bangladeshi identity, demanded capital punishment for war criminals, and found the indictments too lenient) and Islamic hardliners (who nursed their severed links with Pakistan and tried to save the war criminals). In February 2013, massive public protests started in the Shahbag public square to demand capital punishment for war crime convict Abdul Quader Mollah and a ban against the radical Islamist group Jamat-e-Islami. Secular activists used non-violent repertoires and mobilised people through social media and blogs. Though the hardliners murdered many activists, the secular protests were successful to some extent, as many of the convicted were given capital punishment. In both cases, a ‘protest public’ emerged. Though not organised through any civil society organisation or social movement, they successfully brought about sociopolitical transformations, policy shifts, and legal transformation. These protest 2 participants were mostly youth, and used only non-violent repertoires, even though the opposition used massive violence (mainly in case of Shahbag). These South Asian protests were influenced by Occupy Wall Street and Arab Spring, but were located between the local and global. They were influenced by global protest cycles, but raised national identity, consciousness, and conscience as a public issue, and demanded direct participation in national policy formulations. There were divergences also. In India, protests led to a party being formed (the party formed a government), and changes in the law, after which the movement petered out. In Bangladesh, the Shahbag protests started a spiral of counter-violence, radicalisation, and ‘terrorist’ attacks that engulfed society. This paper will analyse the ‘protest public’ in these two cases using an analytical framework derived from the theory of public (Habermas 1989; Fraser 1990) and link it to the notions of postcolonial society and private/public difference in South Asia (Chatterjee 1993 and Chakrabarty 1999). 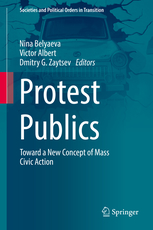