This chapter focuses on the analysis of post-Soviet films and TV series dedicated to the medical profession, and it explores how the perception of gender and the representation of work practices among this professional group have changed in recent decades. The new cinematographic images are considered to be a result of Western cultural impact (after 1991) and Soviet cultural legacies.  The 2000s witnessed the return of the special attention to “doctors” and “medical professionals” as the heroes of post-socialist drama and melodrama. However, these images are often misogynistic, and it is possible to say that cinematographic metaphors reflect developments in social attitudes.

Language: English
Full text (DOCX, 55 Kb)
Keywords: genderfilmsrepresentations medicinesociology of professionsdoctors
Publication based on the results of: Analysis of the demographic and socio-economic behavior of households at different stages of the life cycle and assessment of social and tax policies impact on the dynamics of the standard of living and its differentiation(2016) 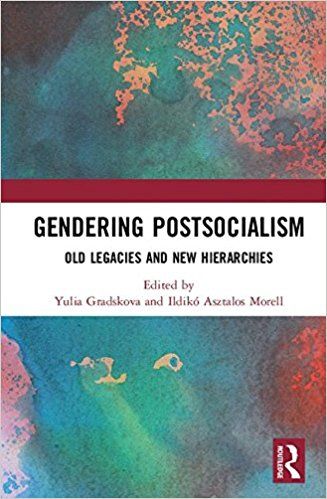 Gendering Postsocialism: Old Legacies and New Hierarchies
Edited by: Y. Gradskova, I. A. Morell. Routledge, 2018.
Similar publications
How Mothers And Fathers Address Their Sons And Daughters In Russian And Vice Versa: A Quantitative Study
Piperski A., Aplonova E. S., Grabovskaya M. et al. Linguistics. WP BRP. НИУ ВШЭ, 2018
This paper discusses terms of address that are used in Russian child-parent communication focusing on the gender of the speakers. The data for the study come from a large-scale online survey completed by 1103 subjects. We identify 10 basic patterns of addressing parents and six basic patterns of addressing children. The results show that females tend to use more suffixed forms when addressing their parents, whereas males are inclined to use harsher-sounding forms of address like batja ‘father (informal)’. When addressing their children, females use suffixed diminutive forms and animal names more frequently than males.
Quantum toroidal gl(1)-algebra: Plane partitions
Feigin B. L., Jimbo M., Miwa T. et al. Kyoto Journal of Mathematics. 2012. Vol. 52. No. 3. P. 621-659.

Gender and Poverty: A Life Cicle Approach to the Analisys of the Differences in Gender Outcomes
Lokshin M., Mroz T. Policy Research Working Paper. WPS. World Bank Group, 2003. No. 3153.
The authors study complex interactions between gender and poverty in postwar Bosnia and Herzegovina. The goal of their analysis is to uncover how a spectrum of gender differentials at different parts of the life cycle varies across income groups. Using the data from the 2001 Bosnia and Herzegovina Living Standards Measurement Study, the authors find strong gender-poverty interaction in the patterns of labor force participation, gender gap in earnings, individuals' school finances, and school attendance. The main source of gender inequality seems to come from differences in investments in girls' and boys' educations that increase with declines in income levels. Short-term income shocks could lead to long-term increases in gender inequality in households with school age children, unless there is ready access to credit markets. The authors also find that the magnitude of the impact of economic development on gender differences in Bosnia will depend on where the growth is concentrated. If the poor capture at least some benefits of economic growth, the gender differences in household investment in human capital of their children will decline. If, on the other hand, growth is concentrated among the richest, then important gender disparities could remain pervasive.  gender; labor market; labor force; girls; gender specific; gender roles;gender differences; gender discrimination; gender equality; social welfare; gender disparities; labor force participation; discrimination; sexes; gender gap; women;gender inequality; gender imbalances; biological differences; discriminatory practices
Социология профессий и занятий в России: обзор текущей ситуации
Абрамов Р. Н. Социологические исследования. 2013. № 1. С. 99-108.
It is an analytical overview of the main areas of research occupations and professions in modern Russia. The paper discusses the key work in this area are characterized by researchers and research teams specializing in the study of occupational groups. I show the relationship of contemporary sociology of occupations and professions in Russia with an international academic context, characterized by key issues and challenges facing this disciplinary area. I have made generalizations about the preferred theoretical approaches and methods used by sociologists and anthropologists of professions and occupations in Russia.
The Effect of Male Migration for Work on Employment Patterns of females in Nepal
Lokshin M., Glinskaya E. Policy Research Working Paper. WPS. World Bank Group, 2008. No. 4757.
This paper assesses the impact of work-related migration by males on the labor market behavior of females in Nepal. Using data from the 2004 Nepal household survey, the authors apply the Instrumental Variable Full Information Maximum Likelihood method to account for unobserved factors that could simultaneously affect males' decision to migrate and females' decision to participate in the labor market. The results indicate that male migration for work has a negative impact on the level of market work participation by the women left behind. The authors find evidence of substantial heterogeneity (based both on observable and unobservable characteristics) in the impact of male migration. The findings highlight the important gender dimension of the impact of predominantly male worker migration on the wellbeing of sending households. The authors argue that strategies for economic development in Nepal should take into account such gender aspects of the migration dynamics.
Институциальная профессионализация юристов в условиях государственного социализма и постсоциализма: сравнительный анализ организаций профессионального самоуправления в Польше и России
Мровчински Р. В кн.: Антропология профессий: границы занятости в эпоху нестабильности. М.: Вариант, 2012. С. 99-117.
Gazing at Welfare, Gender and Agency in Post-socialist Countries
Edited by: M. Jäppinen, M. Kulmala, A. Saarinen. Newcastle upon Tyne: Cambridge Scholars Publishing, 2011.

The volume presents a new and unique view of welfare in Russia and Eastern European countries from an intersectional perspective of welfare, gender and agency. Since the collapse of socialism, the welfare structures of the post-socialist states have experienced large and rapid changes. The discussions on the reforming welfare models serve as the integrating theme for the volume. The authors discuss past and current developments and make comparisons in time and space between the early 1990s and late 2000s and between post-socialist and transitional countries. Welfare and political democratization are analyzed on the one hand as structures and processes and on the other hand as cultural meanings and through agency, which all are strongly gendered. Macro-level analyses and in-depth case studies by scholars from different countries and disciplines provide a wide and multilayered picture of welfare developments and gendered practices of social services, caregiving and civic activism, among others. Special attention is given to research methodologies, particularly on fieldwork and micro-level understanding of the related topics. The contributors come from social and political sciences and from both former socialist and 'Western' countries from Russia and Slovenia as well as the US, the UK, Germany and Finland.