The article describes the methods of holding masterclasses in mathematical and computer design of various architectural 3D models of a house, street, town. Spatial visualization of these models of modern architecture develops students’ spatial awareness and the models can become prototypes of virtual worlds for sci- fi cinema. The method’s main conception is an active synthesis of Humanities and Science in creating student projects. 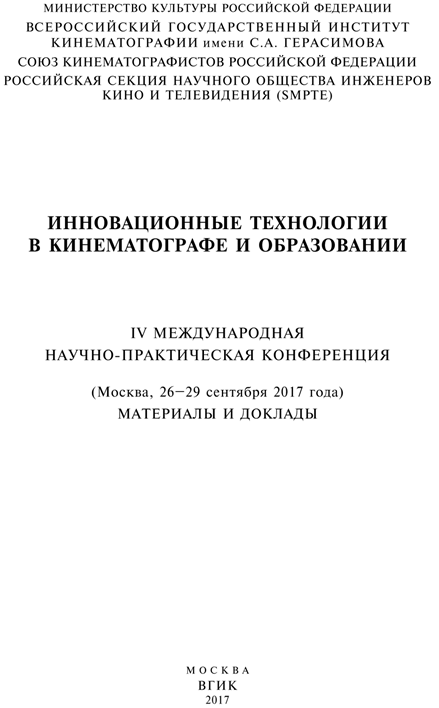 A significant part of the research is devoted to the Soviet musical and ideological construction. The ideal type of "Soviet man", presented in popular musical genres, is characterized by radical novelty and constitutive universalism, which is illustrated on the material of Soviet “songs about the time”, understood not simply as a thematically distinct genre. The history of the «Soviet» as such, can be read as the story of the rise and intensification of reflection of collective engagement into the temporal cognition.

In the period under review, from the late twenties to mid-sixties - you receive a lot of songs, somehow fixing the course of time: here thematized not just subjective experience of immersion into an unordered medium of temporality, but the presence of a sustainable and rational order, to which this medium is submitted. Investigation of the representation of time, memory and youth in the Soviet song of the classical period allows making a conclusion that the stage of final crystallization of «Soviet» musical-poetic meanings is the period of «thaw». In this period the Soviet song takes the genuine universality and integrity, starts to play the role of substance of the «Soviet» as such. Songs about the time - and the Soviet song always somehow relates with time, «small» or «Large» - forms together a generalized three-part formula of the «Soviet»: the link of times (present time is comprehended only through the memory of the legendary past) is given as the fullness of time (memory of the past is not simply subjectively and emotionally experienced, but objectively and actively performed in the present, that is the moment of eternity), which in relation to the future has the quality of absolute novelty (incomplete, flowing, unfinished present is decrepit by definition since its incompleteness requires the occurrence of something different and new; totally completed time, in contrast, is new in comparison with any possible future, because the future is nothing more than the repetition and, perhaps, the isolation, the «privatization» of what is already given in the integrity of the fullness of the time).

Право, релігія, кіно
Kharkov: Права людини, 2018.
Age and Education in the Russian Labour Market Equation
Gimpelson V. E., Kapeliushnikov R. Discussion Paper. IZA DP. Institute for the Study of Labor, 2017. No. 11126.
This paper deals with age and educational dimensions of the labour supply in Russia and explores two time periods: from 2000 to 2015 (retrospective), and the next 15 years (prospective). For our analysis we exploit the micro-census (2015) data and all LFS waves covering the retrospective period. Combining demographic projections with expected employment rates and data on educational achievement we forecast the employment composition up to 2030. If recent past changes in both age and education have contributed to economic growth, their effect is likely to be negative in the next 15 years. These two dimensions are directly associated with such challenges as ageing and over-education of the labour force. Russia is not unique here, but it is more exposed to both dimensions than are many other countries due to its demographic and educational developments. The paper concludes with several tentative policies that could ease, although not cure, the problem.
Анализ INTERNET MOVIE DATABASE: социологические перспективы
Волченко О. В., Корсунова В. И. В кн.: Математическое и компьютерное моделирование [Электронный ресурс] : материалы III Международной научной конференции (Омск, 12 ноября 2015 г.). Омск: Издательство Омского государственного университета, 2015. С. 88-89.