Our research shows that ECHR protection of property rights standards in general may be regarded as “legal transplant” for the Russian law. The broad concept of “property”, requirements of proportionality and balance of public and private interests, rule of law prescriptions that form the core elements of property rights protection under the ECHR were mostly unfamiliar for the Russian legal system at the time Russia ratified the European Convention in 1998. Russian legal system cannot be said to be a fertile ground for human rights norms and the ECHR provisions in particular. Long-standing socialist legal tradition (including public interest domination and ultra-positivism) explains many difficulties and challenges of the ECHR implementation process in Russia. The eight chosen empiric examples of the ECHR violations demonstrate numerous collisions of ECHR spirit with attitudes common for the Russian law. Inherent features of the mentioned tradition (that remains dominant in Russia) produce most of the problems that result in disproportionate, unpredictable interference with private property rights, failure of the State to comply with its positive obligations and provide effective remedies to private parties in case of property rights violations. And it is not a coincidence that most of Article 1 P-1 violations by Russia are coupled with violation of Article 6 (for example, non-execution of court decisions, breach of legal certainty in supervisory review proceedings, confiscatory measures taken in course of criminal or administrative proceedings). This brings us to conclusion that Russian courts and judges need to play more proactive and significant role in property rights protection then they do now. Our study also shows that situation with property rights protection is not static but improving. None of the eight problematic areas of property rights violations remained intact; there were numerous positive developments, changes of legislation and case law necessary to remedy the situation. Overall, we may say that Russia has demonstrated its readiness and willingness to reform its legal system and to strengthen private property rights protection. In most instances, we observed dynamic and productive dialog between Russia, ECtHR and Committee of Ministers of the Council of Europe. But the most important impact of the ECtHR on Russia is expressed in gradual evolution of the Russian legal tradition. ECtHR and its legal doctrines, principles, concepts influenced Russian legal system by diffusing, transferring new values, knowledge, best-practices to lawyers, judges, and scholars. ECtHR provoked internal discussions in the Russian legal community, stimulated changes in interpretation of law by courts. 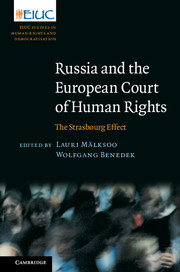 As we can see that on the issues of the identity and the question for reinforcing the multi identity social space, the capacity of the law is not universal and in many a cases it does not bring the desired results. In some cases it brings the very unwelcome results in even the tolerant societies which does not appreciate their civilizaitonal and cultural platform being threatened either by the newly arrived minorities or by the long established minorities with certain clouts and disproportionate levers of power both political and economic. The ideational space that creates the condition of mutual exclusivity which further gets aggravated in the name of protecting the cultural and identity  of the minority rights through legal mechanism has to be further cemented and substantiated through civil and cultural engagements. One of the necessary components is to work on the preparation of the civil and educational common identity platform where one identity is not annulling the other identity or not mutually exclusive but creates the condition where the multilayered formation of the macro identity, the minorities identity  questions are co- habituated. In nutshell, one can safely surmise that though the legal tools and the norms are the basic minimum for the rights of the minorities being safeguarded, in many a cases it further complicates and in few cases it aggravates the whole objective for which these laws and regulations have been established

Abstract: the article is dedicated to approbation of the methodology of new institutional economics to the problems of the Russian housing and communities amenities. In the article the author proposes the model of choice of solution to the negative housing externalities for improving housing and utility services.

The European Convention on Human Rights and the Principle of Non-Discrimination
Napoli: Editoriale Scientifica, 2017.
Property Rights and Internal Migration: The Case of the Stolypin Agrarian Reform in the Russian Empire (forthcoming)
Markevich A., Castañeda Dower P. Journal of Development Economics. 2013.

In the early twentieth century, a large number of households resettled from the European to the Asian part of the Russian Empire. We propose that this dramatic migration was rooted in institutional changes initiated by the 1906 Stolypin land titling reform. One might expect better property rights to decrease the propensity to migrate by improving economic conditions in the reform area. However, this titling reform increased land liquidity and actually promoted migration by easing financial constraints and decreasing opportunity costs. Treating the reform as a quasi-natural experiment, we employ difference-in-differences analysis on a panel of province-level data that describe migration and economic conditions. We find that the reform had a sizeable effect on migration. To verify the land liquidity effect, we exploit variation in the number of households participating in the reform. This direct measure of the reform mechanism estimates that land liquidity explains approximately 18% of migration during this period.

In an economy with weak economic and political institutions, the major institutional choices are made strategically by oligarchs and dictators. The conventional wisdom presumes that as rent-seeking is harmful for oligarchs themselves, institutions such as property rights will emerge spontaneously. We explicitly model a dynamic game between the oligarchs and a dictator who can contain rent-seeking. The oligarchs choose either a weak dictator (who can be overthrown by an individual oligarch) or a strong dictator (who can only be replaced via a consensus of oligarchs). In equilibrium, no dictator can commit to both: (i) protecting the oligarchs' property rights from the other oligarchs and (ii) not expropriating oligarchs himself. We show that a weak dictator does not limit rent-seeking. A strong dictator does reduce rent-seeking but also expropriates individual oligarchs. We show that even though eliminating rent-seeking is Pareto optimal, weak dictators do get appointed in equilibrium and rent-seeking continues. This outcome is especially likely when economic environment is highly volatile.

Why has there been a human rights backlash in Russia despite the country having been part of the European human rights protection system since the late 1990s? To what extent does Russia implement judgments of the Strasbourg Court, and to what extent does it resist the implementation? This fascinating study investigates Russia's turbulent relationship with the European Court of Human Rights and examines whether the Strasbourg court has indeed had the effect of increasing the protection of human rights in Russia. Researchers and scholars of law and political science with a particular interest in human rights and Russia will benefit from this in-depth exploration of the background of this subject.