Tokens in Petri net models may represent a control flow state, or resources produced/consumed by transition firings. From the resource perspective a part of a Petri net marking can be considered as a store needed for ensuring some future system behavior. The talk is devoted to the study of several types of resource equivalence in Petri nets. A resource is defined as a part (submultiset) of a Petri net marking and two resources are called equivalent iff replacing one of them by another in any reachable marking does not change the observable Petri net behavior. We investigate decidability of resource equivalences, present an algorithm for computing its finite approximation, and discuss applicability of resource equivalences to state space reduction and adaptive system processing.

Language: English
Full text
DOI
Text on another site
Keywords: Petri netsBisimulationresource equivalencebehavioral equivalence
Publication based on the results of:
Synthesis and analysis of process models (2017) 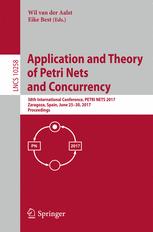