Russia’s Oil Dilemmas. Production: To Go North-East or to Go Deep? Exports: Is a Compromise Between Westward and Eastward Directions Possible?

​As energy is becoming one of the crucial concerns in the EU, this volume provides an in-depth analysis and interdisciplinary perspective on European energy security. Given the multidimensional nature of energy security in terms of physical availability, affordability and geopolitical security, it brings together authors from different backgrounds pursuing a distinctly multidisciplinary approach. The authors' different perspectives correspond to the three sections of the book: international relations, which focuses on Eastern EU partners; energy economics, which highlights the current unconventional hydrocarbons revolution and its impact on EU energy and climate strategies; and public policy, which analyzes EU policies in the context. 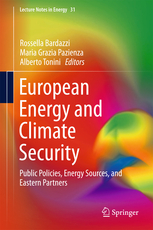 Foreign direct investment provides receiving companies with not only capital necessary for their development but with modern manufacturing technologies and management experience. The article covers investment made into Russian before the financial crisis had begun and after that. Their volume and dynamics are analyzed in comparison with the other BRIC countries i.e. Brazil, Russia, India, China. The article studies their structure as a whole as well as regional and industrial distribution. The instrument for non-resident owners influence on strategic and operational management of a company is analyzed. It is also underlined that companies with foreign participation have higher productivity in comparison with Russian competitors due to their educational programs for their loyal employees, international accreditation, use of different innovations and modern organization of export.

The production of natural gas from natural gas hydrate plays on the industrial scale is feasible with present-day technologies. There are no immediate economic incentives to start such production for most countries because the extraction of natural gas chemically bound within underground formations is more expensive than the extraction of a comparable volume from traditional reservoirs. However, countries lacking traditional hydrocarbon reserves, such as Japan or South Korea, may be interested in the early commercialization of gas hydrates production technologies to gain access to an abundant local fossil energy resource. In addition to its energy applications, research into natural gas hydrates is also motivated by the climate threat posed by their dissociation.

There are highly speculative estimates of the extraction costs covering a broad range. The bottom of the range lies below the top natural gas consumer prices in the world.

After a series of short-term production demonstration tests conducted in 2002-2013, an extended production pilot project is needed to check the long-term well performance and detect potential technological bottlenecks. If such a pilot project is launched in 2020-2025, and the production is found successful, further optimization of the exploration and production technology will gradually narrow the cost gap between gas hydrates and traditional natural gas resources. But it seems unlikely that the cost gap may be eliminated.

The untapped potential for optimization lies in the combined stimulation of the hydrate-bearing formation including both depressurization and heating, possibly through a combination of horizontals wells or pairs of injection and production wells. There are potentially attractive production technologies (in situ combustion, supercritical СО2 injection) which have not been thoroughly tested but may lead to lower production costs compared with the existing methods.

In the near future the optimization of production technology will be based on empirical analysis and field data rather than precise thermodynamic, chemical kinetic or other models. The basic physical principles underlying the production technology are well known, but the precise predictive description of the properties of hydrate-bearing formation is still problematic. The available physical models are incomplete and need to be properly validated with data collected during a full-scale pilot project. At present such models cannot be used for engineering economic feasibility study, which contributes to the uncertainty concerning the commercialization of technologies for producing methane from natural gas hydrates.

Gas hydrates production projects may be thought of as a high-risk part of an energy technology portfolio. R&D activity in this area requires $ 10-20 million annually which is a reasonable cost for opening a new source of energy for the market. Given the abundance of this resource and the scope of R&D programs, it is very likely that the technology for its extraction will be improved to the level ensuring the beginning of a limited but gradually growing commercial production in 2025-2030. In the conservative scenario, gas hydrates will remain a contingency energy resource, and production of methane from natural gas hydrate will only contribute marginally to the energy mix of several specific regional markets, until cheaper traditional natural gas reserves become depleted. In the best scenario, a successful pilot project in 2020-2025 may be followed by further optimization of the production technology which may be widely adopted in 2030-2040.

Finding itself in the post-Paris world: Russia in the new global energy landscape
Makarov I. A., Henry Chen Y., Paltsev S. Report 324 . Joint Program Report Series. MIT Joint Program on the Science and Policy of Global Change, 2017. No. Report 324.
Because the Russian economy relies heavily on exports of fossil fuels, the primary source of human-induced greenhouse gas (GHG) emissions, it may be adversely impacted by Paris Agreement-based climate policies that target reductions in GHG emissions. Applying the MIT Economic Projection and Policy Analysis (EPPA) model to assess the impacts of the Paris Agreement on the Russian economy, this study projects that climate-related actions outside of Russia will lower the country’s GDP growth rate by about one-half of a percentage point. The Paris Agreement is also expected to raise Russia’s risks of facing market barriers for its exports of energy-intensive goods, and of falling behind in the development of low-carbon energy technologies that most of the world is increasingly adopting. The researchers argue that to address these risks, the country needs a new comprehensive development strategy that accounts for the post-Paris global energy landscape. They offer suggestions for key elements of such a strategy, including diversification of the economy, moving to low-carbon energy sources and investing in human capital development. The study simulates three simple diversification scenarios showing that redistribution of incomes from the energy sector to the development of human capital would help avoid the worst possible outcomes.
Энергоресурсы Нагаленда
Бычкова А. А. В кн.: Современная Индия: энергетика и энергетическая безопасность. М.: Институт востоковедения РАН, 2014. С. 128-140.