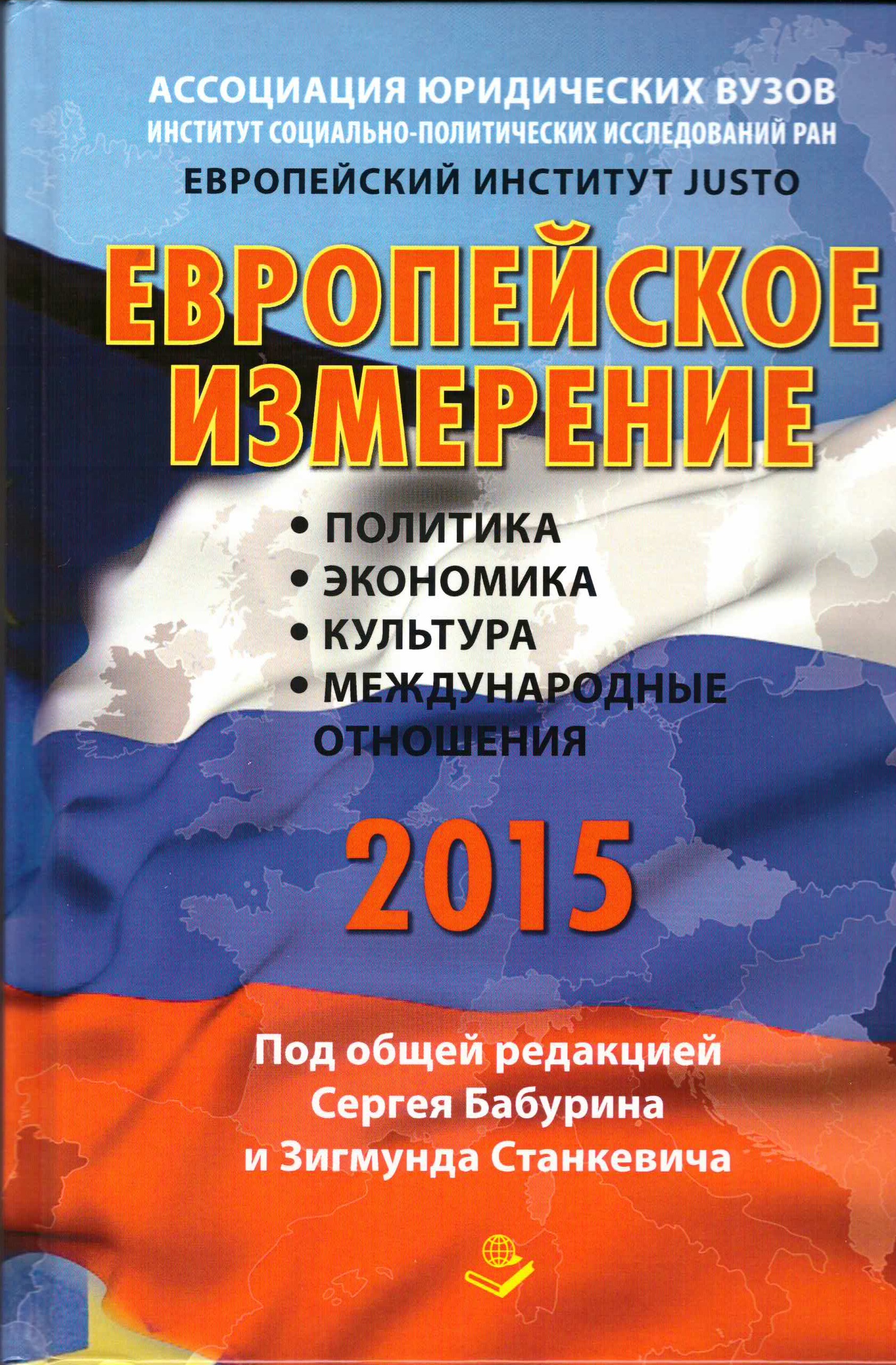 Европейское измерение 2015. Сборник научных трудов под общ. ред. С.Н. Бабурина и З.А. Станкевича. - М.: Книжный мир; Европейский институт JUSTO, 2015. - 656 с.
Исаков В. Б. М.: Книжный мир, 2015.
Similar publications
Cyclically Balanced Growth Paths in a Model of Economic Growth with Endogenous Policy Switching
Akhremenko A. S., Petrov A., Yureskul E. Economics/EC. WP BRP. Высшая школа экономики, 2015. No. 109/EC/2015.
This paper deals with a model of economic growth, which we expand to include endogenous policy switching based on retrospective voting. It is shown that under certain conditions the solution has a special form that we call a cyclically balanced growth path. This type of solution is an analogue to balanced growth paths, which often occur in growth models with constant policies. Cyclically balanced growth paths are investigated analytically, and the growth rate over the cycle has been found. Results of numerical experiments are also provided and possible empirical applications of the model are outlined
Идеологический автопортрет российского режима
Поляков Л. В. Русский журнал. 2009. № 17. С. 20-21.
Демократия в России: проблемы и перспективы развития. Материалы всероссийской (с международным участием) научно-практической конференции, посвященной 80-летию ДГУ, 22–24 сентября 2011 г.
Махачкала: Дагестанский государственный университет, 2011.
(Re-)Bulding the Ship of State at Sea? State Capacity and Regime Dynamics in Post-Communist Countries
Melville A. Y., Stukal D. Political Science. PS. Высшая школа экономики, 2012. No. 07.
The relationship between  stateness and state capacity, on the one hand, and  political regimes and their dynamics, on the other,  has  received  increasing attention in  comparative politics  in recent years. Though empirical research does not provide consistent findings, arguments  currently  under discussion vary from “stateness first” (democratization only after effective state-building) to “building or rebuilding  the ship of state while at sea” (state-building and democratization as complements). Several studies reveal a J-curve link connecting autocracy and  democracy to levels of state capacity,  implying that autocratic regimes have higher state capacity than hybrid ones. This paper questions  these claims and reveals that democratization may start at low levels of state capacity, although democratic consolidation occurs at high levels of state capacity. Using a post-Communist sample, we reveal no J-shaped relationship between state capacity and political regime. We also show that state capacity does not remain unchanged in periods of social and political upheavals and its dynamics in numerous cases stipulate changes in the level of democracy. Particular patterns of this relationship are discussed in the paper in the context of clusters of post-Communist regime transformations.
Место коммуникации в сфере права (читая Ю. Хабермаса)
Гриднева Е. А., Капранова К. О. В кн.: Коммуникативистика ХХI века: перспективы развития социально-гуманитарного знания: материалы VI Всероссийской научно-практической конференции, 19 марта 2010 г.. Н. Новгород: Нижегородский филиал НИУ ВШЭ, 2010. С. 87-93.
Уголовно-правовая охрана интеллектуальной собственности в авторитарной и либерально-демократической России
Козлов А. В. В кн.: Демократия в России: проблемы и перспективы развития. Материалы всероссийской (с международным участием) научно-практической конференции, посвященной 80-летию ДГУ, 22–24 сентября 2011 г.. Махачкала: Дагестанский государственный университет, 2011. С. 60-65.
Демократия в глобальном контексте
Поляков Л. В. В кн.: Демократия: перезагрузка смыслов. М.: Праксис, 2010. С. 11-35.
The philosophy of sovereignty, human rights, and democracy in Russia
Antonov M. Law. LAW. Высшая школа экономики, 2013. No. WP BRP 24/LAW/2013.
This paper examines the correlation between the concepts of sovereignty, human rights, and democracy in Russian legal and political debate, analyzing this correlation in the context of Russian philosophical discourse. It argues that sovereignty is often used as a powerful argument which allows the overruling of international humanitarian standards and the formal constitutional guarantees of human rights. This conflict between sovereignty and human rights also recurs in other countries, and many legal scholars demand the revision or even abandonment of the concept of sovereignty. In Russia this conflict is aggravated by some characteristic features of the traditional mentality which frequently favors statism and collective interests over individual ones, and by the state building a “power vertical” subordinating regional and other particularistic interests to the central power. These features and policies are studied in the context of the Slavophile-Westernizer philosophical divide. This divide reveals the pros and contras put forward by the Russian supporters of the isolationist (conservative) policy throughout contemporary history, and especially in the sovereignty debates in recent years. The Russian Constitution contains many declaratory statements about human rights and democracy, but their formulations are vague and have little concrete effect in court battles where the application of international humanitarian law is counterbalanced by the concerns of the protection of sovereignty. These concerns coincide with isolationist and authoritarian policies, which led in 2006 to their amalgamation into the concept of “sovereign democracy.” This concept is considered in this paper to be a recurrence of the Russian conservative tradition. Even though the concept in its literal meaning has been abandoned by its author and supporters, most of its ideas are still on the cusp of the official political discourse which reproduces the pivotal axes of the Russian political philosophy of the 19th century.
Waiting For Reform Under Putin and Medvedev
Urnov M., Gudkov L. D., Pain E. A. Basingstoke: Palgrave Macmillan, 2012.