Koyré as a historian of religion and the new French phenomenology

The aim of this article is to explore the influence that Koyré’s early work on history of religion had on the development of French phenomenology, with focus on Emmanuel Levinas and Michel Henry. It is well known that Koyré played a prominent role in spreading Husserl’s phenomenology in France, for example, as the editor of the French translation of Husserl’s Cartesian Meditations and the managing editor of the revue Recherches philosophiques. Although Koyré’s affiliation to the phenomenological movement is debatable, his thought owes much to Husserl’s phenomenological method: what matters to him is not the problem of existence, whether in the intellect or outside of the intellect but the ways in which our consciousness deals with certain fundamental ideas and the ways in which such ideas affect consciousness. In his books on St Anselm and Descartes, Koyré focuses on the idea of God and the idea of the infinite. He praises Descartes for giving the infinite priority over the finite, thereby making the notion of the finite dependant on that of the infinite, much as in Cantor’s set theory. I trace the influence of Koyré’s analysis of the infinite in its relation to the finite on the development of the idea of the infinite in Levinas. I also show that Levinassian approach to the idea of God as “the idea of the Infinite in me” goes back to Koyré’s interpretation of the ontological proof of St Anselm. Next, I explore the influence of Koyré’s book on Böhme on the philosophy of Michel Henry. Koyré’s reading of Böhme makes Böhme essentially a precursor of German idealism describing the Absolute that wishes to manifest itself and distinguishing between the manifestation and what is made manifest in this manifestation. Henry applies this approach to phenomena in general, which leads him to a criticism of intentionality and the optical metaphor. In line with much of post-Heideggerian philosophy, both Levinas and Henry prioritise affectivity (be it by the Infinite, God, or the Self) over intentionality. I show that in doing so they lose a cosmological dimension: the concepts of truth as the truth of Being (Heidegger), the truthfulness of the word to the Other (Levinas) or the truth of Life (Henry) supplant the mere truth of knowledge, that is, the truth of the world. Following Koyré’s guiding principle of “the unity of human thought” I would like to argue in favour of a more balanced phenomenology that wants to be not only prescriptive but also descriptive, and sensitive to a certain scientific dimension. 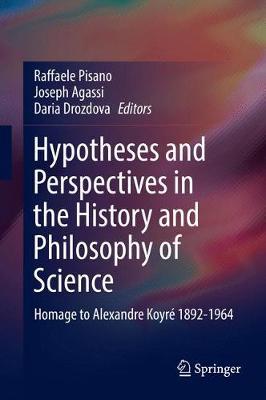 The article analyses the link between the famous French epistemologists Emile Meyerson and his younger friend and disciple, historian of science Alexandre Koyré. Koyré is known primarily by his research of the history of the scientific thought; his main interest was to grasp the moments of the transformation of rational structures within the history. Nevertheless, in this paper I will argue that Alexandre Koyré in some measure accepts Emile Meyerson’s claim on the immutability of human reason that constitutes the central point of Meyerson’s epistemology. But within the rationality in general he distinguishes the immutable core that is constituted by the logical laws of reasoning and the outer level of “mentality” which is subjected to the historical changes and transformations.

What is the origin of language? For Levinas, from Aristotle to von Humboldt, the tradition of Western metaphysics has understood language as a representation of reality, going beyond or transcending experience. In this way, language is a metaphor that substitutes for experience—and all language is originally metaphorical. Experience however, is essentially inexpressible—for it not only transcends language, but it does so because experience is always experience of the other, of that which remains infinitely other. And language reminds us of its failure (a failure which Derrida sees, ironically, as a success) to express this other by maintaining a trace of the inexpressible in every expression—and metaphor is failure of expression par excellence. But what is the origin of this original failure? In fact, it can be found in the way in which language makes metaphors (which is the way in which it makes itself, transcends itself, substitutes for itself, becomes other than itself). For as Aristotle reminds us: metaphor-making (indeed, all language, every word and deed) is poiēsis—and the origin of poiēsis is improvisation. If we have, however, discovered the origin of language in improvisation—but what is that?