The choice of generalized Dempster-Shafer rules for aggregating belief functions based on imprecision indices.

In the paper we investigate the criteria of choosing generalized Dempster-Shafer rules for aggregating sources of information presented by belief functions. The approach is based on measuring various types of uncertainty in information and we use for this linear imprecision indices. Some results concerning properties of such rules are also presented. 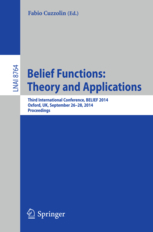 In the paper we investigate the criteria of choosing generalized Dempster–Shafer rules for aggregating sources whose information is represented by belief functions. The approach is based on measuring various types of uncertainty in information and we use for this purpose in particular linear imprecision indices. Some results concerning properties of such rules are also presented.

The Qualitative Characteristics of Combining Evidence with Discounting
Lepskiy A. In bk.: Advances in Intelligent Systems and Computing. Vol. 456: Soft Methods for Data Science. Springer, 2017. P. 311-318.

The qualitative characteristics of the combining evidence with the help of Dempster’s rule with discounting is studied in this paper in the framework of Dempster-Shafer theory. The discount coefficient (discounting rate) characterizes the reliability of information source. The conflict between evidence and change of ignorance after applying combining rule are considered in this paper as important characteristics of quality of combining. The quantity of ignorance is estimated with the help of linear imprecision index. The set of crisp and fuzzy discounting rates for which the value of ignorance after combining does not increases is described.

Lecture Notes in Artificial Intelligence
Edited by: J. Vejnarová, V. Kratochvíl. Vol. 9861: Belief Functions: Theory and Applications. Springer, 2016.
The theory of belief functions, also referred to as evidence theory or Dempster-Shafer theory, is a well-established general framework for reasoning with uncertainty. It has well-understood connections to other frameworks, such as probability, possibility, and imprecise probability theories. First introduced by Arthur P. Dempster in the context of statistical inference, the theory was later developed by Glenn Shafer into a general framework for modeling epistemic uncertainty. These early contributions have provided the starting points for many important developments, including the Transferable Belief Model and the Theory of Hints. The biennial BELIEF conferences (organized by the Belief Functions and Applications Society) are dedicated to the exchange of ideas, reporting of recent achievements, and presenting the wide range of applications of this theory. This conference series was started in Brest, France, in 2010; the second event was held in Compiègne, France, in May 2012; and the third in Oxford, UK, in September 2014. The present volume contains the proceedings of the 4th International Conference on Belief Functions, which took place in Prague, Czech Republic, on September 21–23, 2016. The book contains 25 peer-reviewed papers (out of a total number of 33 submissions) describing recent developments concerning both theoretical issues (including combination rules, conflict management, and generalized information theory) and applications in various areas (such as image processing, material sciences, and navigation).
The Kantorovich Problem and Wasserstein Metric in the Theory of Belief Functions
Bronevich A., Rozenberg I. N. In bk.: Belief Functions: Theory and Applications 5th International Conference, BELIEF 2018, Compiègne, France, September 17-21, 2018, Proceedings. Vol. 11069. Springer, 2018. P. 31-38.

In the paper we argue that aggregation rules in the theory of belief functions should be in accordance with underlying decision models, i.e. aggregation produced in conjunctive manner has to produce the order embedded to the union of partial orders constructed in each source of information; and if we take models based on imprecise probabilities, then such aggregation exists if the intersection of underlying credal sets is not empty. In the opposite case there is contradiction in information and the justifiable functional to measure it is the functional giving the smallest contradiction by applying all possible conjunctive rules. We give also the axiomatics of this contradiction measure.