by year
Subject
News
HSE University Cohosts Virtual THE Young Universities Summit
Several representatives of HSE University took part in the seventh Times Higher Education Young Universities Summit, organized jointly with HSE University on June 22-23 and held entirely online. The Summit focused on the global outlook for higher education and opportunities for new growth for young universities.
Bachelors Benefit from Shorter Study Duration
Four-year, instead of five-year, degree programmes shave off a year of study, thus saving considerable time and money, and allowing graduates to find employment and build work experience earlier, which eventually translates into a higher salary. This raises the question of whether a fifth year of undergraduate studies brings any returns at all.
Researchers Outline Specific Patterns in Reading in Russian
Psycholinguists from the HSE Center for Language and Brain, in collaboration with researchers from the City University of New York and the University of Stuttgart, investigated how reading in Russian varies among different groups of readers. The authors used a novel method in bilingualism research — comparison of the eye-movement sequences (scanpaths) in adult native speakers of Russian, Russian-speaking children, and adult bilinguals with different levels of Russian proficiency. The results of the study were published in Reading Research Quarterly.
Publications
Author:
Campus:
Any
Moscow
Saint Petersburg
Nizhny Novgorod
Perm
Sub-department:
Keywords:
Subject:
Priority areas:
▼
Language:
▼
russian  english
Year:
2022
1958
Add a filter
Of all publications in the section: 31
Sort:
by name
by year

Dmitry Andreevich Gudkov received key results in the topology of real algebraic varieties - in particular, solved the problem of classifications of non-singular plane  algebraic curves of degree 6 included by David Hilbert on his famous list of Hilbert 's Problems under the number16. This and its other results initiated intensive development of the problematic and its inclusion in the mainstream of modern mathematics. In addition, Dmitry Andreevich made an important contribution to the study of Nizhny Novgorod period of N.I. Lobachevsky 's biography.

Dmitry Andreevich paid great attention to the development of mathematics and mathematic education at the University of Nizhny Novgorod. It was organizer and the first head (1961-1978) of the Department of Mathematics of Radiophysical Faculty, then (1978-1988) - Head of the Department of Geometry and Higher algebras of the Faculty of Mechanics and Mathematics, under its scientific guidance a number of specialists in real algebraic geometry grew up.

The writer thanks the management of the Lobachevsky University for the  supporting the publication of this book, the staff of the NNGU Museum for the provided museums materials, Yu.D. Gudkov and A.D. Gudkov for materials from personal archive of their father and for photographs from the family collection, and all authors who shared their memories of D.A. Gudkov. 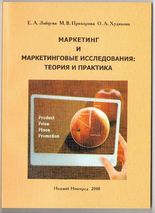 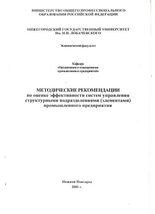 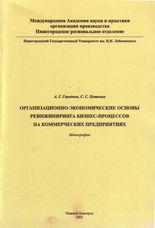 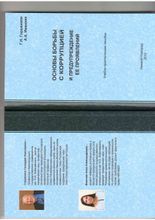 The manual consists of theoretical and practical parts. In the theoretical part, the essence and content of corruption as a social and legal phenomenon and its criminal and legal feature are revealed, the characteristic of combating corruption as a management system and the system itself as an object of anti-corruption policy is given. In each section of the theoretical part, questions for self-examination and creative thinking are formulated, which in most cases represent a problem of an analytical nature.

In the practical part, the issues of the discussion plan related to the systematization of knowledge of the new scientific branch - corrupciology, as well as the problem of corruption behavior are highlighted. Analytical tasks are formulated.

The monograph contains the results of theoretical analysis and empirical research of organizational culture and resistance to changes in two entrepreneurial - oriented universities – NNSU  and HSE (Nizhny Novgorod). The presented analysis of empirical material is carried out using the typological model of culture by R. Goffi and G. Jones "double C Cube", the questionnaire by S. Ritchie and p. Martin "Motivational profile" and the author's methods of assessing the resistance to changes and value preferences of teachers in research activities. For researchers in the entrepreneurial University and the Universiletsky managers. 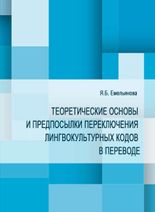