by year
Subject
News
International Regional Studies: Russia’s Big Hunt for Global Markets
The Second International Conference ‘East and West in the New Transformation Phase: Asia Encountering the Challenges Of Deglobalization’ will be held from December 16-17, 2020. According to Vera Vishnyakova, Head of theFaculty of World Economy and International Affairs School of International Regional Studies, it will be the first event to discuss the most pressing questions in contemporary international regional studies.
Weeping Men: Why Misandry Flourishes in Russian Society
Although Russia has traditionally been a patriarchal society, misandry—the sharp criticism of men, or ‘reverse sexism’—is on the rise. Women accuse men of every possible sin, from acting aggressively to being too passive at work and home, and from narcissism to general indifference. In a pilot study, HSE University researchers studied misandry in the women of two different generations.
The Politics of a Kiss: Who Kissed Each Other and Why in Byzantium
Known for its particularly tactile culture, the Eastern Roman Empire maintained rather complex customs when it came to kissing—on the lips, the shoulders, the chest, and the feet. Emperors and nobles, military leaders, and even monks engaged in the practice unsparingly. Based on the research of Sergey Ivanov, professor of history and philology at the Institute for Oriental and Classical Studies of HSE University, IQ has prepared a short guide to Byzantine kisses.
Publications
Author:
Campus:
Any
Moscow
Saint Petersburg
Nizhny Novgorod
Perm
Sub-department:
Keywords:
Subject:
Priority areas:
▼
Language:
▼
russian  english
Year:
2021
1958
Add a filter
Of all publications in the section: 5
Sort:
by name
by year

This book, with theoretical and practical analyses of comparative political systems of Eastern countries (Asia and Africa), their political process and political cultures, describes and analyses the influence of political culture on political process in the Eastern world. It gives readers an opportunity to make a comparative appraisal of maturity of civil society in these countries as well as their specifics in political interactions and internal political competition seen through the eyes of a group of distinguished Russian researchers. The book concentrates also on specifics of political-economic and political modernization in the East, and assesses the prospects of an emergence of a Western as well as a non-Western democracy in the framework of Eastern political transformations. It also explains why the one-dimensional spread of democracy — completely negating or neglecting regional political-cultural specifics — may lead to war among civilizations instead of the formation of a more just and fair system of democratic governance. 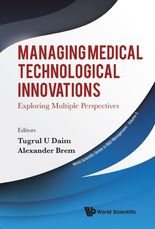 This book addresses the issue of modern medical innovations management through an inductive approach by looking into cases before putting forward solutions in terms of strategies and tools. It provides a model for the designing and implementation of effective healthcare technology management (HTM) systems in hospitals and healthcare provider settings, as well as promotes a new method of analysis of hospital organization for decision-making regarding technology to show how systematic management using a strategy that balances bottom-up and top-down driven innovations, can deliver better medical technological advances.

Managing Medical Technological Innovations is organized in three parts. Part 1 covers innovation strategies, laying the groundwork and concepts in design thinking. Part 2 follows by presenting the tools available for implementation. And finally, Part 3 uses the case studies of pharmaceutical firms in China and hospital medical record management in Holland to illustrate how these ideas and methodologies have been applied.