by year
Subject
News
Make the Most of the Sun
Professor Alexey Tameev of HSE MIEM, along with a team of colleagues, has proposed a calculation method to determine the optimal photoactive layer thickness which can maximize the power conversion efficiency of solar cells. Applicable for both polymer andperovskite solar cells, the method can become a milestone on the path from laboratory samples to solar cells made from new generation materials. The results of the research are covered in ‘A common optical approach to thickness optimization in polymer and perovskite solar cells’, an article published in Scientific Reports.
Graphene Drum: Researchers Develop New Phonon Laser Design
Professor Konstantin Arutyunov of the HSE Tikhonov Moscow Institute of Electronics and Mathematics (MIEM HSE), together with Chinese researchers, has developed a graphene-based mechanical resonator, in which coherent emission of sound energy quanta, or phonons, has been induced. Such devices, called phonon lasers, have wide potential for application in information processing, as well as classical and quantum sensing of materials. The study is published in the journal Optics express.
HSE University Researchers Co-Author 2021 UNESCO Science Report
On Friday, June 11, UNESCO held a ceremony to launch its new UNESCO Science Report, which arrives at a crucial moment as countries reach the halfway mark of meeting the UN’s Sustainable Development Goals by 2030. The Report shows that, over the past five years, countries of all income levels have begun efforts to transition to economies that are both digital and green. At the ceremony, six of the Report’s authors provided overviews of trends in their regions. Representing the East European region was Professor Leonid Gokhberg, First Vice Rector of the HSE University and Director of the HSE Institute for Statistical Studies and Economics of Knowledge (ISSEK).
Publications
Author:
Campus:
Any
Moscow
Saint Petersburg
Nizhny Novgorod
Perm
Sub-department:
Keywords:
Subject:
Priority areas:
▼
Language:
▼
russian  english
Year:
2022
1958
Add a filter
Of all publications in the section: 2
Sort:
by name
by year

In the Great Terror of 1937–38 more than a million Soviet citizens were arrested or killed for political crimes they didn’t commit. What kind of people carried out this violent purge, and what motivated them? This book opens up the world of the Soviet perpetrator for the first time. Focusing on Kuntsevo, the Moscow suburb where Stalin had a dacha, Alexander Vatlin shows how Stalinism rewarded local officials for inventing enemies. Agents of Terror reveals stunning, detailed evidence from archives available for a limited time in the 1990s. Going beyond the central figures of the terror, Vatlin takes readers into the offices and interrogation rooms of secret police at the district level. Spurred at times by ambition, and at times by fear for their own lives, agents rushed to fulfill quotas for arresting “enemies of the people” —even when it meant fabricating the evidence. Vatlin pulls back the curtain on a Kafkaesque system, forcing readers to reassess notions of historical agency and moral responsibility in Stalin-era crimes. 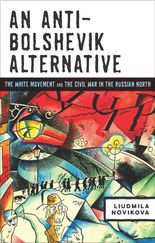 Book
An Anti-Bolshevik Alternative: The White Movement and the Civil War in the Russian North
Novikova L. University of Wisconsin Press, 2018.

The traditional narrative of the Russian Civil War is one of revolution against counterrevolution, Bolshevik Reds against Tsarist Whites. Liudmila Novikova convincingly demonstrates, however, that the struggle was not between a Communist future and a Tsarist past; instead, it was a bloody fight among diverse factions of a modernizing postrevolutionary state. Focusing on the sparsely populated Arkhangelsk region in Northern Russia, she shows that the anti-Bolshevik government there, which held out from 1918 to early 1920, was a revolutionary alternative bolstered by broad popular support. Novikova draws on declassified archives and sources in both Russia and the West to reveal the White movement in the North as a complex social and political phenomenon with a distinct regional context. She documents the politics of the Northern Government and its relations with the British and American forces who had occupied the ports of Murmansk and Arkhangelsk at the end of World War I. As the civil war continued, the increasing involvement of the local population transformed the conflict into a ferocious "people's war" until remaining White forces under General Evgenii Miller evacuated the region in February 1920.