by year
Subject
News
Researchers Reveal Genetic Predisposition to Severe COVID-19
HSE University researchers have become the first in the world to discover genetic predisposition to severe COVID-19. The results of the study were published in the journal Frontiers in Immunology.
International Laboratory of Bioinformatics Opens at the Faculty of Computer Science
On January 25, 2021, an International Laboratory of Bioinformatics opened at the Faculty of Computer Science. The main goal of the laboratory is to determine the role of alternative DNA structures in the genome.
Researchers Identify the Most Important Skills in Entrepreneurial Education
As part of the series, ‘Modern Analytics of Education’, the Human Capital Multidisciplinary Research Center has released a report entitled ‘Entrepreneurship Training in Universities in Russia and the World’. Based on a review of best practices, the authors identified 71 skills that are fostered in entrepreneurial education abroad. The researchers selected 63 programmes and courses from 44 universities and 24 countries for analysis.
Publications
Author:
Campus:
Any
Moscow
Saint Petersburg
Nizhny Novgorod
Perm
Sub-department:
Keywords:
Subject:
Priority areas:
▼
Language:
▼
russian  english
Year:
2022
1958
Add a filter
Of all publications in the section: 1
Sort:
by name
by year 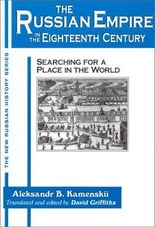 Book
The Russian Empire in the Eighteenth Century. Searching for a Place in the World
Kamenskii A. B. NY; L.: M.E. Sharpe Inc., 1997.

Russia's eighteenth-century drive toward modernity and empire under the two "greats" - Peter I and Catherine II - is fully captured in this new work by one of Russia's outstanding young historians. Kamenskii develops three themes: Russia's encounter with European civilization; the transformation of "Holy Russia" into a multinational empire; and the effects of efforts from above to modernize Russia selectively along Western lines. Writing in a clear, crisp style, the author enlivens his narrative with observations from contemporary literary figures and political commentators that illuminate the significance of the events he describes.

In preparing this first history of eighteenth-century Russia to be written in many years, Kamenskii has drawn on the work of several generations of historians from many nations. His goal - gracefully achieved - has been to produce a readable, one-volume synthesis revealing the events and processes that were of greatest importance in transforming Russia into one of the world's most lasting empires.