by year
Subject
News
Toys Prove to Be Better Investment Than Gold, Art, and Financial Securities
Unusual ways of investment, such as collecting toys, can generate high returns. For example, secondary market prices of retired LEGO sets grow by 11% annually, which is faster than gold, stocks, and bonds, HSE University economists say. Their paper was published in the Research in International Business and Financejournal.
Researchers Propose Method to Increase Charge of Supercapacitors
Researchers from HSE MIEM and the Institute of Non-Classical Chemistry in Leipzig have proposed a new theoretical model of supercapacitors that takes into account the properties of a cation, which considerably impacts the electric differential capacitance of supercapacitors. This is the first publication of its kind in electrochemistry. The authors believe that the model will allow engineers to create more powerful energy sources in the future. The results of the study were published in The Journal of Physical Chemistry C. The study was completed with support from a grant by RSF.
HSE University Researchers Develop First Standardized Russian-Language Test for Aphasia-related Disorders
Researchers from the HSE University Centre for Language and Brain have created and standardized a new test battery for diagnosing language disorders in people with brain damage. The test is the first standardized assessment tool in Russia in the field. The paper entitled ‘The Russian Aphasia Test: The first comprehensive, quantitative, standardized, and computerized aphasia language battery in Russian’ has just beenpublished in the PLOS ONE journal.
Publications
Author:
Campus:
Any
Moscow
Saint Petersburg
Nizhny Novgorod
Perm
Sub-department:
Keywords:
Subject:
Priority areas:
▼
Language:
▼
russian  english
Year:
2022
1958
Add a filter
Of all publications in the section: 2
Sort:
by name
by year 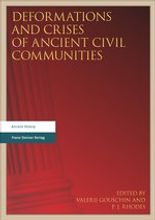 This volume results from a conference of Russian and British scholars of ancient history. It studies crises of various kinds in the history of civil communities in the Graeco-Roman world. Some chapters concern the main lines of Greek and Roman political development: instability in the Greek cities, the adaptation of aristocrats to the democracy of Athens, empire and crisis in fourth-century Greece; in the Roman Republic the dictatorship, the tribunate, changes in institutional arrangements which had far-reaching but unforeseen consequences; also in Rome the transition from the Middle to the Late Empire.

Others focus on particular episodes where new interpretations are possible: a 'crisis of the pyramid-builders' in Egypt which Herodotus misdated by more than a millennium; two problematic episodes in the hellenistic world, concerning Caunus, and Cius and Myrlea; in the Roman world, in connection with the transition from the Republic to the Principate an examination (particularly suitable for a Russian conference) of the interpretations of Russian scholars a century ago, and, finally, the survival of Neoplatonic communities in the Late Empire.