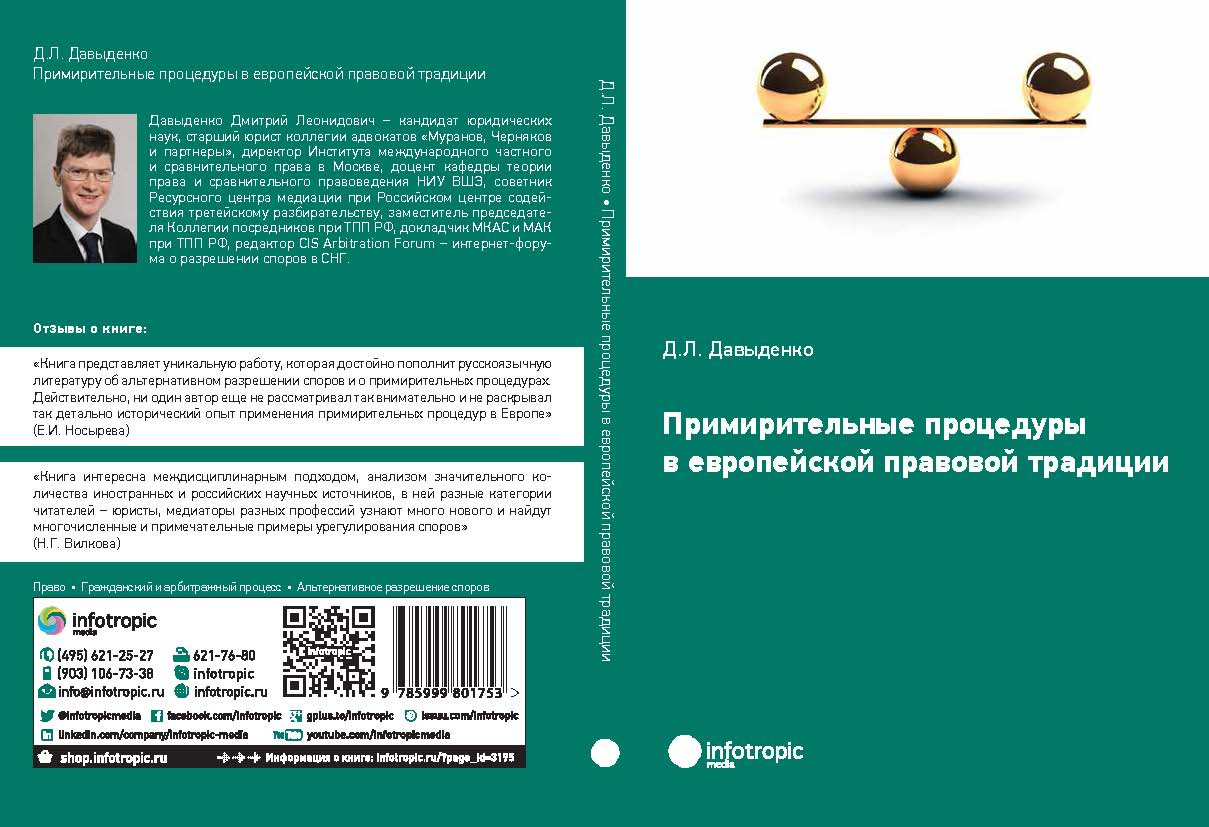 The chapter in a monograph gives an insight into the key problems and most recent tendencies of the law and practice of mediation in Russia. Russia already has detailed federal legislation governing mediation. Also, mediation has been practised in Russia for years, even when such legislation was not in force. Furthermore, Russian law governing mediation is in rapid development. Thus current Russian experience can be of interest to legislators and practitioners from many countries which also face problems with case overload in the state courts.

Linsegnamento del diritto romano nell Universita Imperiale di San Pietroburgo
Alexeeva T. A. Quaderni camerti di studi romanistici International Survey of Roman Law. index. Jovene Napoli, 2012. No. 40.
The article is devoted to the study of pre-revolutionary tradition of Roman law in St. Petersburg, specially, in the Imperial University. In chronological order, the author presents the various features of professors teaching the subject, describing the work published by them, shows the relationship of the Roman law teaching manners to the socio-political situation in the country and the situation of the universities. The article describes the characteristics of the study of the history of Roman law and its dogma (system) and results of its studies by Russian researchers during their stay in Germany, where modern Roman law was actual before the entrance into force of the German Civil Code. The analysis concludes by comparing the pre-revolutionary tradition and contemporary situation of teaching of Roman law and its contribution to legal education.
Наблюдения над палеографией византийских надписей Северного Причерноморья
Виноградов А. Ю. Вестник древней истории. 2012. № 1. С. 182-195.
Abelian automorphism groups of cubic fourfolds
Mayanskiy E. arxiv.org. math. Cornell University, 2013. No. 5150.
We list all finite abelian groups which act effectively on smooth cubic fourfolds.
Конституция Российской Федерации как фактор укрепления экономического и социального правопорядка на новом этапе решения стратегических задач (к 15-летию принятия): Материалы региональной научно-практической конференции (Нижний Новгород, 12 декабря 2008 года)
Edited by: В. М. Баранов, П. Н. Панченко, А. В. Козлов Т. 1. Н. Новгород: Нижегородский филиал НИУ ВШЭ, 2009.
Таможенно-тарифные правоотношения в таможенном союзе ЕврАзЭС
Пащенко А. В., Хрешкова В. В. Реформы и право. 2012. № 1. С. 15-22.
Paleoconservatism of the Southern Agrarians
Belkovich R. Law. LAW. Высшая школа экономики, 2013
The emergence of the Tea Party movement in recent years has shown that under the surface of mainstream political life in the USA there exists a different layer of ideas, which cannot be satisfactorily described in terms of the Republican/Democrat dichotomy. These ideas have their origins in the foundation of the American Republic, which owes a lot to ancient and mediaeval political theory. In the twentieth century there was a revival of these ideas in the form of the so-called “paleoconservative” movements which rediscovered their ancient and mediaeval heritage. This paper focuses on one of them, the Southern Agrarian movement, as exemplary of this radical intellectual project.
Ценности России в системе ценностей мира и контексте задач экономико-правового обеспечения их создания, накопления, сбережения, рационального использования, приумножения и приращения: Материалы всероссийской научно-практической конференции (Нижний Новгород, 22 апреля 2010 года)
Edited by: П. Н. Панченко, А. В. Козлов Т. 1. Н. Новгород: ООО "Стимул-СТ", 2010.
Russian Competition law in light of the principles of ex post and ex ante
Totyev K. Y. Law. LAW. Высшая школа экономики, 2014
This article is devoted to the legitimation and application of the standards of ex post and ex ante by courts and the executive authorities in the sphere of competition regulation. The postulates of ex post and ex ante are considered as legal principles. The principle of ex post is intended solely for judicial and administrative application; it has a deontological framework; it assumes that the legality of the activity of economic entities is assessed only on the basis of positive legal criteria in terms of the subjective rights violated; it is limited to a particular case. The traditional approach to the principle of ex post limits the scope of its application on the subjects and excessively expands its objects. The postulate of ex ante has a utilitarian basis which assumes the assessment of the application of relevant rules in the future. One of the main aims of the article is to refute the common view of lawyers and economists that a legislator applies principle of ex ante not being bound by principle of ex post, while it is the other way around for the courts and the executive authorities. The principle of ex ante may be applied not only in the process of the creation of new rules but also at the application stage for existing rules on economic competition. This is justified because the arguments of the courts and the executive authorities about a refusal to take into account the consequences of a decision in a particular case are not convincing.
Кодификация законодательства: теория, практика, техника: Материалы Международной научно-практической конференции (Нижний Новгород, 25–26 сентября 2008 года)
Edited by: В. М. Баранов, Д. Краснов Н. Новгород: Нижегородская академия МВД России, 2009.
Анализ предложений по надзору за деятельностью финансовых конгломератов
Пеникас Г. И., Малков Е. С. Банковское дело. 2012. № 5. С. 30-32.