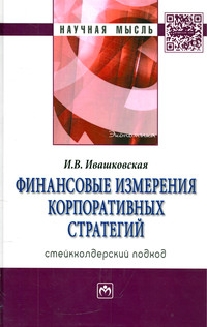 In this article the influence of publicly declarative values on the performance of top fifty banks in Russia is analyzed. For determination of correlations an index of corporate values (CV-Index) is calculated as well as relationship between this index and financial indicators of banks are examined in SPSS program. In order to calculate CV-Index the detailed research of banks’ websites, codes of ethics and corporate behavior is conducted. All the defined corporate values are categorized into seventeen groups. The research has confirmed a statistically significant correlation between CV-Index and net profit of banks.

Socially-oriented projects require specific stakeholder approach for social impact (SROI) evaluation. In this article we attempt to identify groups of stakeholders interested in getting information concerning social impact of the project. We also offer classification of stakeholders with reasons to include or exclude a particular group from different steps of SROI analisys. Practical aspects of this approach are illustrated by the example of the “Separate collection” ecological movement.

When writing this tutorial, the contributions received by the authors with the assistance of the NTF - National Training Fund subproject "Creating a center of excellence for economics teachers ' Innovation Project Development of education and work , received diplomas Russian competitions intellectual projects " Ideas for Russia " ( 2004) and "Power" (2008 , the Public Chamber of the Russian Federation ) .   The manual is intended for students and undergraduates enrolled in the direction of "Economics" and "Management" , and may also be useful to managers and professionals , both financial and non-financial corporations.

This paper presents an analysis of the UK Technology Foresight Exercise from the Dialogue, Vision and Dissemination perspectives. Participation and dialogue-based visioning and policy making process was one of the key components of the Foresight exercise, which aimed at involving stakeholders to set priorities in the UK science base and industry. In this way, the stakeholders were given the opportunity to shape the S&T policies and strategies. The exercise helped in a great deal to the establishment of better links between the Government funded S&T and industry in a collective visioning process.

The paper analyzes the general tendencies and the main problems that arise when corporative structures implement their own strategies. Considering the peculiarity of the Russian economy, almost all large corporations are functioning under extremely tough market conditions. They have to adapt their organizational structure so as to be able to follow a chosen strategy. Awareness of the main problems, which are often common for all large companies, is essential for structural adaptation.