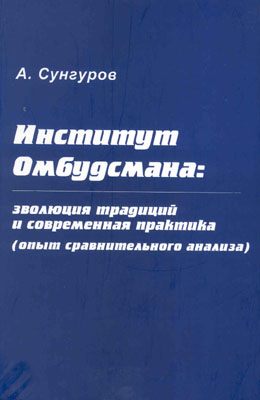 In the 1970s there was a change in the political regime in Spain and Portugal. The result was the adoption of constitutions designed to create the legal basis for democratization that were characterized by a broad perception of the foreign experience of constitutionalism. In particular, some institutions were included in the state mechanisms, which had won recognition in states that are committed to constitutional values, but were new to Spain and Portugal. One of them is the institution of the ombudsman. The development of an ombudsman was widely discussed in professional circles. Legislators held discussions on the necessity an ombudsman in the state’s legal system, its name, and some other important issues. However, the situation with human rights, the judicial system, and defects in other human rights institutions, such as violations by executive bodies and undermining public confidence to the institutions of public authority as a result of the dictatorial regimes in Spain and Portugal, were obvious enough. Hence the prevailing of the viewpoint on the expediency of the institution of the Ombudsman as an institution designed to control the administration from the perspective of respect for human rights. Herewith, in the course of building the Ombudsman concept, a special role was assigned to representatives of science and journalism. In the process of adopting the Constitutions and, subsequently, the laws on the ombudsman, the legislators demonstrated an understanding and unwillingness to transform the institution into a political tool of any political party. The provisions regulating the status and activities of this institution in the Iberian countries of Europe allowed the Ombudsman to not be guided by political interests in the process of investigating the improper activity of executive bodies. As a result of the adoption of constitutions and laws regulating the status and activities of the Ombudsman, the institution was provided with guarantees of political neutrality: the status of ombudsmen was fixed in the law at a high level; the organizational independence of the Ombudsman from public authorities was ensured; Ombudsmen were empowering with a broad competence, including the authority to initiate amparo proceeding in Spain, and to forward the appeal to the Constitutional Court with a request to verify the constitutionality of normative acts in Spain and Portugal; ensuring the financial independence of the Ombudsman’s activities; securing the responsibility for interference in its activities; regulating the procedure for empowering and terminating the powers of the ombudsman; and, in Portugal at least, ensuring that the ombudsman also has immunity. The authors of the current constitutions of Portugal and Spain aimed not only to borrow constitutional institutions that proved to be justified in foreign countries, but also to increase their effectiveness. Therefore, ombudsmen in these countries have some powers aimed at increasing such efficiency and expressing the features of their status. The establishment of the ombudsman institution in Portugal and Spain had an impact on Latin America, where the institution of the ombudsman appeared and spread with the inherent characteristics of the Ibero-American ombudsman.

This book is the result of three years research project ‘Institutional base of social-political innovation: possible role of institutes with mediator functions’ , supported by grant of RFH in 2012-2014. The actual views concerning innovations at all and possibility of their use for social and policy fields (public policy innovations) are analyzed in the first chapter of book. The actual views concerning  of process of arising of new problem resolving in public policy are analyzed in this chapter also, including of conception of advocacy coalitions of Pal Sabatier, conception of  boundary structures etc.

The second chapter of monograph devoted to conception of institutes with mediation functions, and to development in different countries of three kinds of such institutes – think tanks, ombudsman institution and public councils including public chambers. The  third and fourth chapters are the results of research of discussed institutes in Russia and Russian regions, including three regional cases – Saratovskaya oblast and Krasnodarskiy and Permskiy krays, where analyzed process of interaction of oll three kinds of mediator institutes.

The objective of the study is to reveal the role of the previous work experience of ombudsmen in RF subjects in the character of his/her activities in the region. In accordance with the objective of the study three groups of ombudsmen were identified on the basis of their background: former deputies, former administration representatives, former policemen and Office of Public Prosecutor officers. To achieve the objective of the study and testing of the assumption offered analysis of the Annual reports of ombudsmen Internet representation of his/her activities was made. A number of semiformal interviews with ombudsmen from the three groups were analyzed. On the basis of the analysis of ombudsmen's Annual reports and the Internet representation of their activities it can be assumed that the higher degree of publicity, more pro-active approach are more typical for former administration representatives. As to former Internal affairs ministry and Office of Public Prosecutor officers they are very similar in majority of characteristics