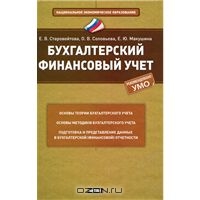 This article is of interest for scientists-analysts and has the important practical value.

The manual is given a general description of the methods and the Principles of accounting, as well as the main topics of financial accounting with examples. In the fourth part of the work presented prac-cal objectives for the course, as well as complex tasks and a test. The manual is intended for students majoring in "Economics" and "Management", studying accounting course. Also, benefits may be useful to managers and financiers, who are faced with accounting and reporting systems in the enterprise, as well as for anyone interested in the issues of accounting.