Summarizes the latest applications of robust optimization in data mining.

An essential accompaniment for theoreticians and data miners Data uncertainty is a concept closely related with most real life applications that involve data collection and interpretation. Examples can be found in data acquired with biomedical instruments or other experimental techniques. Integration of robust optimization in the existing data mining techniques aims to create new algorithms resilient to error and noise. 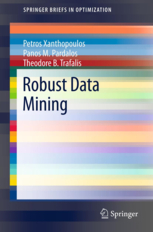 In this paper, we use robust optimization models to formulate the support vector machines (SVMs) with polyhedral uncertainties of the input data points. The formulations in our models are nonlinear and we use Lagrange multipliers to give the first-order optimality conditions and reformulation methods to solve these problems. In addition, we have proposed the models for transductive SVMs with input uncertainties.

The paper considers the phoneme recognition by facial expressions of a speaker in voice-activated control systems. We have developed a neural network recognition algorithm by using the phonetic words decoding method and the requirement for isolated syllable pronunciation of voice commands. The paper presents the experimental results of viseme (facial and lip position corresponding to a particular phoneme) classification of Russian vowels. We show the dependence of the classification accuracy on the used classifier (multilayer feed-forward network, support vector machine, k-nearest neighbor method), image features (histogram of oriented gradients, eigenvectors, SURF local descriptors) and the type of camera (built-in or Kinect one). The best accuracy of speaker-dependent recognition is shown to be 85% for a built-in camera and 96% for Kinect depth maps when the classification is performed with the histogram of oriented gradients and the support vector machine.

This book constitutes the refereed proceedings of the 6th IAPR TC3 International Workshop on Artificial Neural Networks in Pattern Recognition, ANNPR 2014, held in Montreal, QC, Canada, in October 2014. The 24 revised full papers presented were carefully reviewed and selected from 37 submissions for inclusion in this volume. They cover a large range of topics in the field of learning algorithms and architectures and discussing the latest research, results, and ideas in these areas.

Support vector machines (SVM) is one of the well known supervised classes of learning algorithms. Basic SVM models are dealing with the situation where the exact values of the data points are known. This paper studies SVM when the data points are uncertain. With some properties known for the distributions, chance-constrained SVM is used to ensure the small probability of misclassification for the uncertain data. As infinite number of distributions could have the known properties, the robust chance-constrained SVM requires efficient transformations of the chance constraints to make the problem solvable. In this paper, robust chance-constrained SVM with second-order moment information is studied and we obtain equivalent semidefinite programming and second order cone programming reformulations. The geometric interpretation is presented and numerical experiments are conducted. Three types of estimation errors for mean and covariance information are studied in this paper and the corresponding formulations and techniques to handle these types of errors are presented.