This book constitutes the refereed proceedings of the 17th International Conference on Conceptual Structures, ICCS 2009, which took place in Moscow, Russia, on July 26-31, 2009.

The 18 papers presented together with 5 invited contributions were carefully reviewed and selected from approximately 50 submissions. Originally centered around research on knowledge representation and reasoning with conceptual graphs, over the years ICCS has broadened its scope to include innovations from a wider range of theories and related practices, among them other forms of graph-based formalisms like RDF or existential graphs, formal concept analysis, semantic Web technologies, ontologies, concept mapping and more. 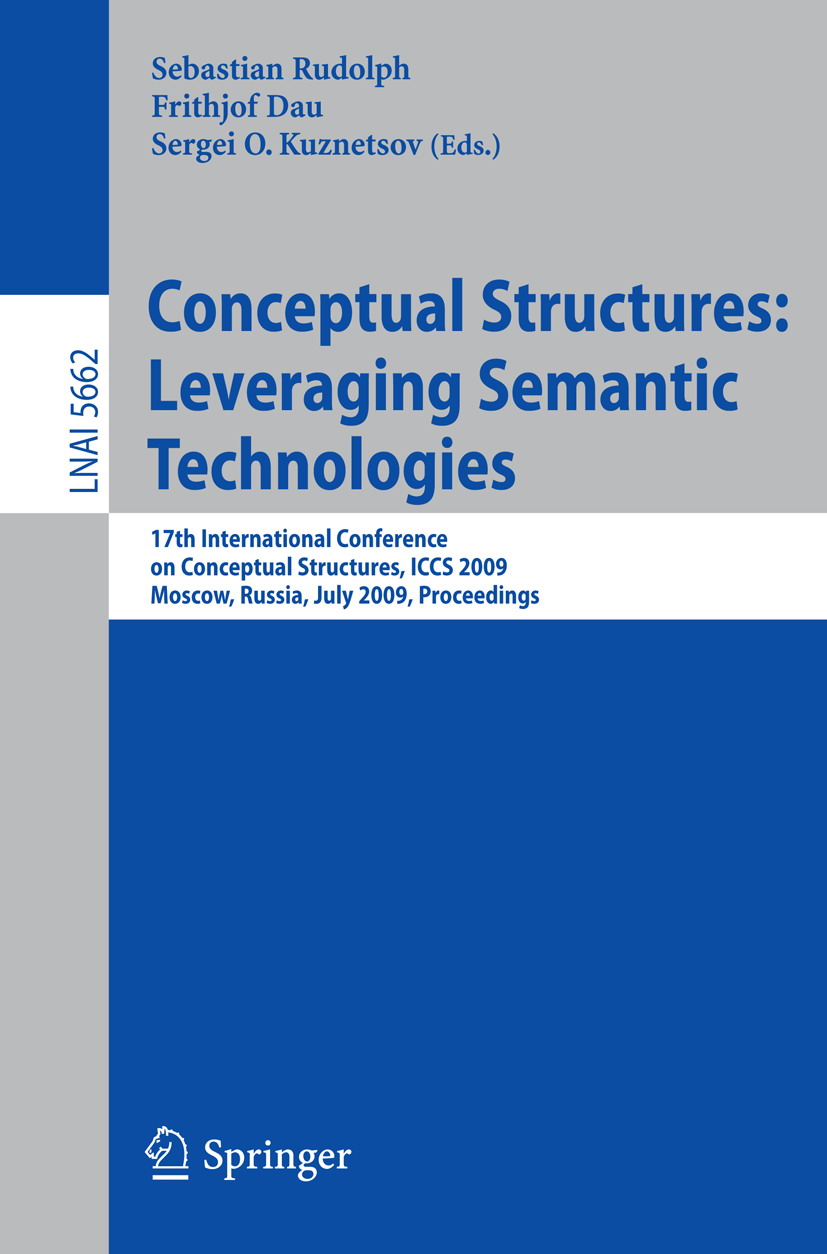 The paper describes the structure and possible applications of the theory of K-representations (knowledge representations) in bioinformatics and in the development of a Semantic Web of a new generation. It is an original theory of designing semantic-syntactic analyzers of natural language (NL) texts with the broad use of formal means for representing input, intermediary, and output data. The current version of the theory is set forth in a monograph by V. Fomichov (Springer, 2010). The first part of the theory is a formal model describing a system consisting of ten operations on conceptual structures. This model defines a new class of formal languages – the class of SK-languages. The broad possibilities of constructing semantic representations of complex discourses pertaining to biology are shown. A new formal approach to developing multilingual algorithms of semantic-syntactic analysis of NL-texts is outlined. This approach is realized by means of a program in the language PYTHON.

This paper presents an algorithm that allows the user to issue a query pattern, collects multi-word expressions (MWEs) that match the pattern, and then ranks them in a uniform fashion. This is achieved by quantifying the strength of all possible relations between the tokens and their features in the MWEs. The algorithm collects the frequency of morphological categories of the given pattern on a unified scale in order to choose the stable categories and their values. For every part of speech, and for all of its categories, we calculate a normalized Kullback-Leibler divergence between the category’s distribution in the pattern and its distribution in the corpus overall. Categories with the largest divergence are considered to be the most significant. The particular values of the categories are sorted according to a frequency ratio. As a result, we obtain morphosyntactic profiles of a given pattern, which includes the most stable category of the pattern, and their values.

Artificial Intelligence in Legal Services: State-of-Art and Users’ Expectations in Russia
Repina A. Science, Technology and Innovation. WP BRP. Высшая школа экономики, 2019
Artificial intelligence is having a transformative effect on business world. Among others, legal services industry is susceptible to these transformations, but being a part of the legal system, it adopts novelties more slowly than other service-based industries. The issue of AI acceptance for legal services is widely discussed in Russia. Opportunities and threats of AI implementation are the subjects of academic research, business enquires, experts' assessments, and professional community discussions. Still, all those pieces of evidence are biased by the objectives of specific research and methodology used, mostly have no or little empirical data to ground conclusions on. The absence of empirical evidence on the state-of-theart of AI in legal services and users’ expectations on AI implementation hinders further research in various topics – from legal firms’ management and legal innovations to the lawyering process and access to justice. This paper confirms expert opinions regarding AI technologies and their implementations for legal services, suggesting the cooperation of lawyer and AI in legal service rendering rather than competition. Russian lawyers appear to have the experience of using very advanced AI solutions, including those that are unavailable directly on the Russian market. The expectations of lawyers as users of AI technologies could be described as uncertain, which means that further extension of AI implementation is still a disputable issue.
How to Measure AI: Trends, Challenges and Implications
Turovets Y., Vishnevskiy K., Altynov A. Science, Technology and Innovation. WP BRP. Высшая школа экономики, 2020. No. 116.
How do comparable and similar indicators to measure artificial intelligence (AI) look across countries? In answering this question, our study addresses two main aims. Firstly, the paper introduces a holistic approach as operational tool to measure AI development (supply side) and adoption (demand side), which covers AI definition, AI technologies taxonomy, and a set of indicators. Secondly, the suggested methodology combines several sources of information like survey, bibliometric, and patent analysis. Next, by analyzing the results of a pilot survey and calculations, the reliability of indicators and a tentative assessment the state of the art of AI development and adoption in Russia is provided. Taking into consideration the complex nature of AI, the study represents a number of baseline parameters that give an overview of AI progress on a country level. The next step will be an elaboration of detailed indicators that at capture AI characteristics to a greater extent in different economic sectors
Polyphonie – Mehrsprachigkeit und literarische Kreativität
Edited by: B. Michaela, S. Hannes, V. Sandra Вена: Praesens, 2010.