Part I, Sovereign Immunity from a Comparative Perspective: Weak v. Strong Immunity Regimes, deals with the diversity of existing regimes of State immunity at the national level. This part aims to explore different approaches of particular states to sovereign immunity and their general attitude to international law, and attempts to understand why some States favour a weaker State immunity regime by multiplying exceptions or interpreting them broadly, while others continuously support a stronger one and sometimes rely on the doctrine of absolute immunity.

Part II, International Customary Law of Sovereign Immunity, Human Rights and Counter-Terrorism, highlights how human rights and counter-terrorism have shaped the law and practice of sovereign immunity. This part specifically discusses the role of national legislators and judges in the development of international law, emerging conflicts between national constitutional norms and the rules of international law concerning State immunity and human rights, and possible ways of their reconciliation.

Part III, Sovereign Immunity of States and their Financial Obligations, contributes to on-going debates related to the mixed and complex nature of States’ financial obligations. In this part, authors elaborate on perceptions of the underlying public-private law divide, cross influences in public and private international law and their consequences for State immunity, as well as recent trends relating to immunity from execution. 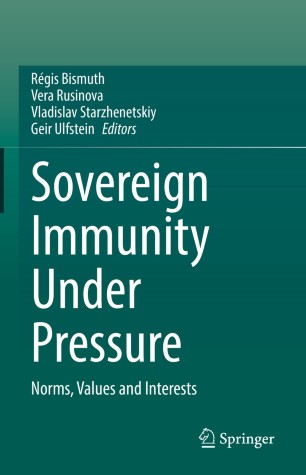