The Return of Eurasia: Continuity and Change

This book defines Eurasianism, a political idea with a long tradition, for a new century. Historically, Eurasia was depicted as a “third continent” with a geographical and historical space distinctively different from both Europe and Asia. Today, the concept is mobilized by the Russian foreign policy elite to imagine a close relationship with China and indirectly inspires the Chinese Belt and Road Initiative. A Russian-Chinese partnership forms the core of a new Eurasian region, yet Turkey, India, Hungary, Central Asia and the other parts of the supercontinent are also embracing Eurasian concepts. This book is of interest to scholars of Russian and Chinese foreign policy, to economists, and to scholars of political thought.

Chapters
Greater Eurasia: From Geopolitical Pole to International Society?
, in: The Return of Eurasia: Continuity and Change. .: Singapore: Palgrave Macmillan, 2021.. Ch. 2. P. 33-78.
The last few years have seen a radical shift that could change the entire structure of international relations. In general terms, it is the transition from bipolarity to multipolarity. An important aspect of this process is the formation of alternative systems of international governance, especially on the regional level. This allows some scholars to speak ...
Research target: Political Science, International Relations, and Public Administration
Priority areas: humanitarian
Language: English
Full text
DOI
Text on another site
Keywords: RussiaChinaEurasiaEurasianismGreater Eurasia 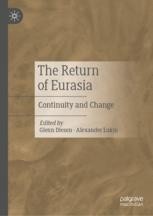