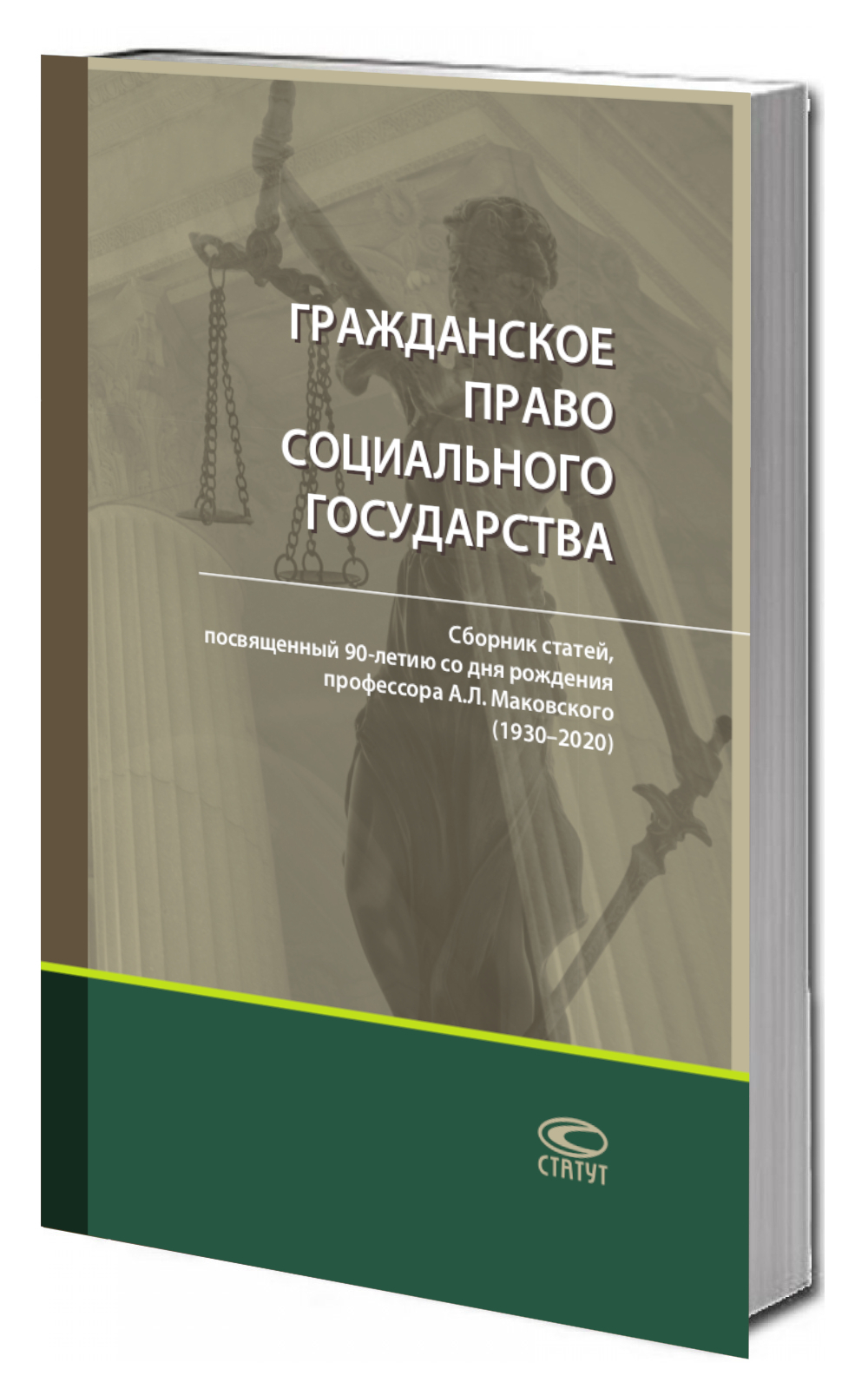 Similar publications
Гражданское право и его роль в формировании гражданского общества / Civil law and its Formation of Civil Society
Edited by: Е. Шерстобитов М.: Статут, 2013.
Issues of Legal Person’s Concept. (in Ukrainian)
Lebedenko S. In bk.: Modern Civil Law. Materials of the International scientific civil conference. Odessa: 2011.
К проблеме предприятия как объекта и субъекта права
Жигалов С. В. В кн.: Право. Гражданин. Общество. Экономика. (Сборник статей студентов, магистрантов, аспирантов). Вып. 6. М.: Национальный исследовательский университет "Высшая школа экономики", 2012. С. 8-15.
Корпоративные отношения в гражданском праве: от сущности к пределам правового воздействия
Власова А. С., Удалова Н. М. Н. Новгород: ПромоЛинк, 2017.
The Legitimacy of the Bolshevik Order, 1917-1918: Language Usage in Revolutionary Russian Law
Borisova T. Y. Law. LAW. Высшая школа экономики, 2012. No. 05.
The article describes and analyzes the legislative politics of revolutionary regimes in Russia in 1917-1918. The author aims to demonstrate the political meaning of the form of early Soviet legislation and its legitimizing effect. The revolutionary legislators often used specific language in the new laws as a vehicle of legitimacy, i.e. to make the people comply. The two main types of legal language used by the Bolsheviks can be interpreted from the perspective of different types of legitimacy. The revolutionary strategy used propagandistic legislation, written in the language of lay people, which urged them to act according to the new law. It can be seen as a request for acts of the people to legitimize the soviets. On the contrary, the traditional strategy employed old bureaucratic means of writing and distributing legislation to the local soviets. The language used by this strategy was closed to the understanding of a lay audience and implied traditions of obeying the law written in familiar legal language, which in turn implied rational/legal legitimacy. The second strategy had already become dominant after the first months of the Bolshevik revolution. This observation demonstrates that from the very beginning of their rule, Soviet leaders approached legislative policy from a technocratic point of view, which determined the further development of Soviet legal theory and practice.
The legacy of classical natural law in Russian dogmatic jurisprudence in the late 19th century
Poldnikov D. Law. LAW. Высшая школа экономики, 2013. No. WP BRP 20/LAW/2013.
The paper examines the inconspicuous influence of the legacy of the classical natural law of the 18th century on Russian dogmatic jurisprudence of civil law, taking as an example the authoritative “Course on civil law” (1868-1880) by Konstantin Pobedonostsev. Despite the dogmatic purpose of the course and the hostility of its author towards European liberal doctrines of natural law, some striking similarities between them can be found, especially in the general provisions and principles of contract law, the method of its exposition and the recourse to justice and supra-positive ideal.
Криминализация рейдерства: взгляд цивилиста
Аверченко Н. Н., Шкундина Ю. С. Законы России: опыт, анализ, практика. 2010. № 7. С. 43-48.

Обязательства из неосновательного обогащения и ведения чужих дел без поручения
Новак Д. В. В кн.: Гражданское и торговое право зарубежных государств: учебник. - 4-е изд., перераб. и доп.. Т. II. М.: Международные отношения, 2005. Гл. XXVII. С. 378-397.
Эволюция Российского государства и права. Сборник научных статей. 30 ноября 2012 г.
Edited by: Т. М. Лопатина Маджента, 2012.
Who Seeks State Support In The New Russia And Why?
Anikin V. A., Lezhnina Y. P., Mareeva S. et al. Public and Social Policy. WP BRP Series. НИУ ВШЭ, 2019
This paper investigates the underlying nature of the demand for state support in Russia in the labor market and employment, social investments, and material support. Based on recent findings from social policy studies, the authors tested four different mechanisms: (a) the demographic features of the population, (b) household incomes and disposable assets including human and social capital, (c) interests, and (d) locus of control and cultural attitudes. Drawing on an all-Russian representative monitoring survey conducted by the Institute of Sociology of the Federal Center of Theoretical and Applied Sociology of the Russian Academy of Sciences in 2018, the authors argue that the popula- tion’s demand for state support has a very complex nature. The relative effect of income has a para- doxical nature. On the one hand, the Russian data confirm the hypothesis of ‘the altruistic rich’, de- veloped in recent studies, which predicts that, in societies with high inequalities, higher incomes boost the likelihood of demand for redistributive policies. On the other hand, higher incomes foster state escapism among those Russians who do not consider the state as a reliable agent capable of solving their problems.
Political and legal concept of modern democratic state
Nisnevich Y. A. American Journal of Sociological Research. 2012. Vol. 2. No. 3. P. 32-37.