This publication covers the main categories of the civil service. Special attention is paid to the legal status of the state civil servant, and his interaction with businesses, as well as the prevention of corruption risks in the implementation of professional activities. The issues of conflict of interest settlement in the state civil service are considered separately.
The publication is addressed to students studying at the faculty of master's degree program "State and business", civil servants studying at the faculty of advanced training. 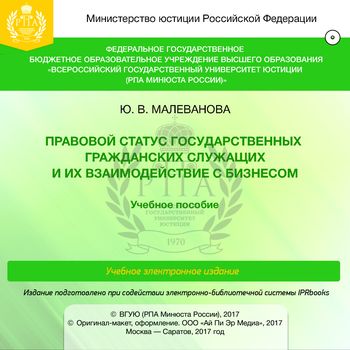 Relying on the results of the sociological poll of civil servants, the authors suggest a number of measures, aimed at enhancing the development of public service in Russia. In particular, mechanisms of ensuring compliance of the number and qualifying structure of civil servants with functions of executive authorities are considered. Measures of increasing competitiveness and objectivity of the selection of applicants to positions in civil service, the estimates of competence, based on the criteria of professionalism are discussed. The directions of updating and strengthening a practical orientation of the professional educational programs, formation of individual career trajectories are suggested. The pay system, social privileges and guarantees of civil servants are analyzed. Suggestions to improve the structure and mechanisms of formation of a compensatory package in line with modern performance pay systems are given.