Over the past decade, rapid integration of new computer systems and information technology takes place both in the State's and public authorities' activities, and in various social spheres. As of today, development and implementation of high technology and informatization process in various areas of social activities lead to drastic increase in the living standards of population. The healthcare sector is not an exception in this regard. Due to this, application of high technologies in medical activity including provision of medical care using telemedicine becomes particularly apparent. It is worth noting that European countries have a wealth of experience in using telemedicine, while Russia is still at the initial stage of creation and implementation of such information technologies in healthcare. Russian laws and regulations governing organization of telemedicine are still at the phase of discussion and approval. The purpose of this article is to consider problematic issues related to legal regulation of telemedicine both in foreign countries and in Russia, as well as to conclude whether solutions applied abroad to overcome legal gaps in telemedicine can be applied in Russia.

Over the past decade, rapid integration of new computer systems and information technology takes place both in the State's and public authorities' activities, and in various social spheres. As of today, development and implementation of high technology and informatization process in various areas of social activities lead to drastic increase in the living standards of population. The healthcare sector is not an exception in this regard. Due to this, application of high technologies in medical activity including provision of medical care using telemedicine becomes particularly apparent. It is worth noting that European countries have a wealth of experience in using telemedicine, while Russia is still at the initial stage of creation and implementation of such information technologies in healthcare. Russian laws and regulations governing organization of telemedicine are still at the phase of discussion and approval. The purpose of this article is to consider problematic issues related to legal regulation of telemedicine both in foreign countries and in Russia, as well as to conclude whether solutions applied abroad to overcome legal gaps in telemedicine can be applied in Russia. 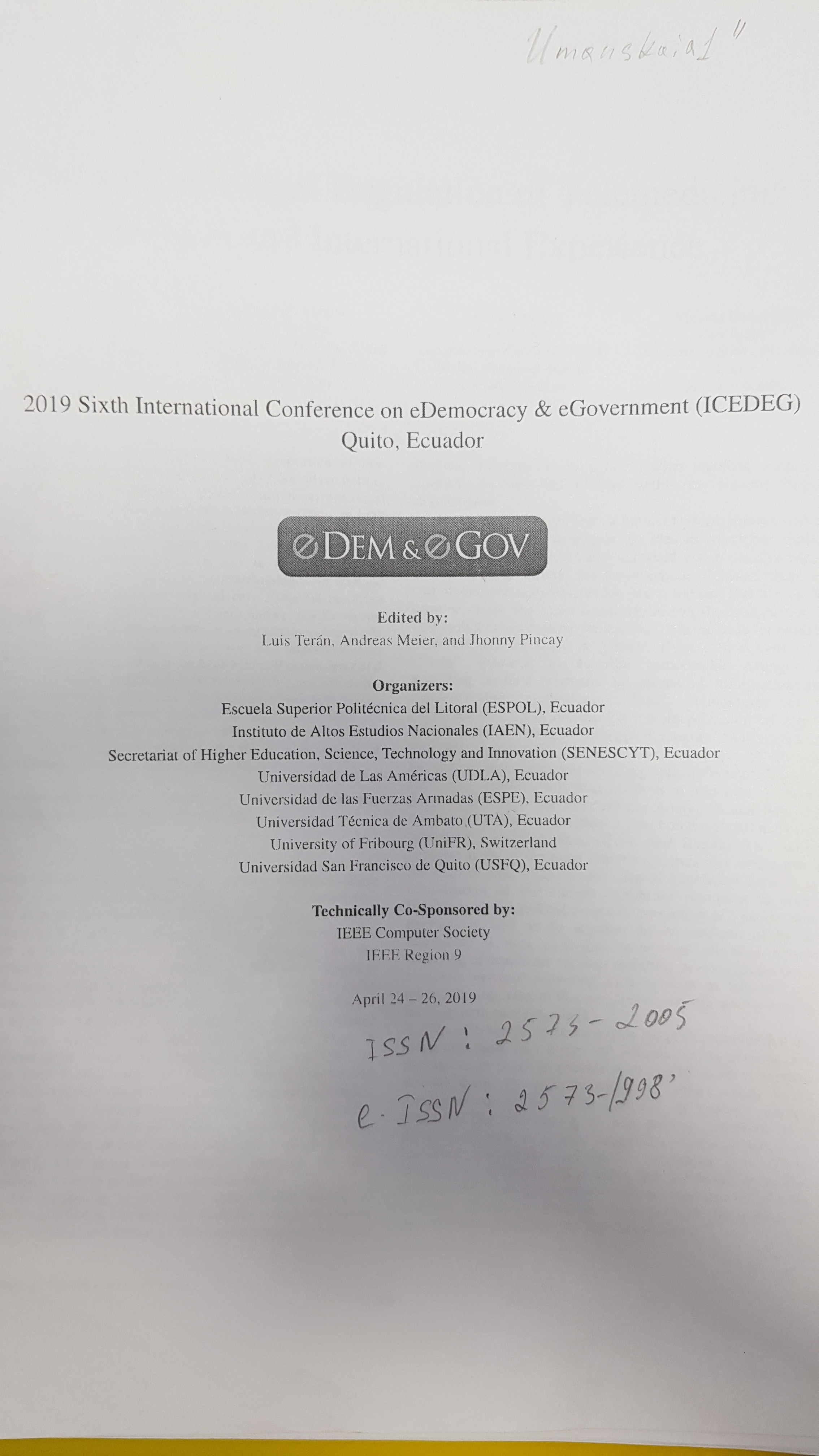 Similar publications
Правовое регулирование публичной службы
Глушко Е. К., Краснов М. А., Овчинников И. И. М.: ТЕИС, 2011.
The Increasing Role of Technology in the Legislation Improvement
Sivitsky V. A. In bk.: Regulatory Reforms - Implementation and Compliance: Proceedings of the Tenth Congress of the International Association of Legislation (IAL) in Veliky Novgorod, June 28th - 29th, 2012. Vol. 17. Baden-Baden: Nomos, 2014. P. 325-328.
The Legitimacy of the Bolshevik Order, 1917-1918: Language Usage in Revolutionary Russian Law
Borisova T. Y. Law. LAW. Высшая школа экономики, 2012. No. 05.
The article describes and analyzes the legislative politics of revolutionary regimes in Russia in 1917-1918. The author aims to demonstrate the political meaning of the form of early Soviet legislation and its legitimizing effect. The revolutionary legislators often used specific language in the new laws as a vehicle of legitimacy, i.e. to make the people comply. The two main types of legal language used by the Bolsheviks can be interpreted from the perspective of different types of legitimacy. The revolutionary strategy used propagandistic legislation, written in the language of lay people, which urged them to act according to the new law. It can be seen as a request for acts of the people to legitimize the soviets. On the contrary, the traditional strategy employed old bureaucratic means of writing and distributing legislation to the local soviets. The language used by this strategy was closed to the understanding of a lay audience and implied traditions of obeying the law written in familiar legal language, which in turn implied rational/legal legitimacy. The second strategy had already become dominant after the first months of the Bolshevik revolution. This observation demonstrates that from the very beginning of their rule, Soviet leaders approached legislative policy from a technocratic point of view, which determined the further development of Soviet legal theory and practice.
Правовое регулирование минимальной оплаты труда
Орловский Ю. П., Кузнецов Д. Л., Черняева Д. В. Проблемы рынка труда. WP3. Высшая школа экономики, 2013. № WP3/2013/09.
This research is aimed at analyzing the prospects of the Russian minimum wage legislation reform from an international legislative perspective. Authors study historical aspects of conceptual development in the field worldwide, examine the “minimum wage” concept definitions suggested in international treaties and legislative sources of various countries from a comparative viewpoint, suggest a methodology of the minimum wage setting procedures and systemize relevant mechanisms of enforcement. A policy of abstention from the minimum wage setting on the national level has also been studied and the compensatory instruments have been singled out and described. On the basis of the results of this research major trends in the minimum wage regulations in contemporary world have been outlined. A study of the pressing problems of the minimum wage legal regulation in the Russian Federation and of the suggestions for its further development are given in a separate section of this paper.
Информационные технологии управления рисками программных проектов
Авдошин С. М., Песоцкая Е. Ю. Информационные технологии. 2008. № 11. С. 13-18.

Implementation of IT and program projects seems to be very complicated and taught process, associated with many uncertainties and risks. Sure, this does not mean the rejection of such projects, supposed the more responsibility for the decision making process of new information technologies implementation. To manage various problems which face project managers, it makes sense to use special risk management software. The functionality of modern risk management systems allows identifying risk occurrence, conducting scenario modeling, take the more appropriate managing decisions based on scenario analysis and mathematical calculations. All these functionality will support project manager to optimize his business activities in accordance to risk management practices and ensure better coordination and balance inside the project team. Currently there available a wide range of project management software, but it is reasonable to conduct some analysis in terms of applicability to specific IT projects. The author will review the most appropriate software solutions for the risk management in IT area, conduct competitive analysis and provide some recommendations on software selection.

Legal basis for expert activities is developing in Russia. Concepts of the development of the civil law legislation and information society, regulations for strategic management have given a new impulse to it. Expert procedures are shifting to network space. Their quality and efficiency are increasing due to the usage of Intelligent Information Technology and situation centers.

This conference is the 9th of its kind on the Mediterranean region. This edition will provide a forum to discuss achievements and current experiences in specific areas in medical informatics and telemedicine, focusing on innovation methods and approaches. Its overall goal is to increase interaction and collaboration among professionals from both health and information technology sectors within and between the Mediterranean countries for scientific and social development in the region. The Euromediterranean Medical Informatics and TeleMedicine conference series have provided a forum for discussions and an environment that fosters creation of new collaboration in an interdisciplinary environment. They led to the emergence of the Euro-Mediterranean Medical Informatics and Telemedicine Association and number of regional cooperation. We hope that this year conference will accomplish the expectations announced in the previous ones, and will enhance collaboration between all participants coming from Europe, Africa and the Middle East. The organization of the EMMIT 2013 Conference in Morocco has come together through the hard work of the local organizing committee, together with the International Institute of Tele-Medicine personnel and members of Euro-Mediterranean Medical Informatics and Tele-Medicine Association. The overall plans were overseen by a steering committee and the program was put together through the work of the scientific committee chaired by Prof. Francesco Sircurello. We are very grateful to all our sponsors, particularly to the Moroccan Ministry of Health that accepted to offer its patronage to the event, The University Mohammed First, The Faculty of Medicine of Oujda, The Faculty of Sciences of Oujda, The School of Engineering, The Faculty of Medicine of Fes and The MarchicaMed agency. We are also excited about the list of participants who are coming in from the Mediterranean and around the world. Finally, we would like to add our welcome to all of you to the beautiful Mediterranean city of Nador, Morocco, the Kingdom of solidarity, peace and hospitality.