This book concentrates on in-depth explanation of a few methods to address core issues, rather than presentation of  a multitude of methods that are popular among the scientists. An added value of this edition is that I am trying to address two features of the brave new world that materialized after the first edition was written in 2010. These features are the emergence of “Data science” and changes in student cognitive skills in the process of global digitalization.
The birth of Data science gives me more opportunities in delineating the field of data analysis. An overwhelming majority of both theoreticians and practition-ers are inclined to consider the notions of ‘data analysis” (DA) and “machine learning” (ML) as synonymous. There are, however, at least two differences between the two. First comes the difference in perspectives. ML is to equip computers with methods and rules to see through regularities of the environment - and behave accordingly. DA is to enhance conceptual understanding. These goals are not inconsistent indeed, which explains a huge overlap between DA and ML. However, there are situations in which these perspectives are not consistent.
Regarding the current students’ cognitive habits, I came to the conclusion that they prefer to immediately get into the “thick of it”.  Therefore, I streamlined the presentation of multidimensional methods. These methods are now organized in four Chapters, one of which presents correlation learning (Chapter 3). Three other Chapters present summarization methods both quantitative (Chapter 2) and categorical (Chapters 4 and 5). Chapter 4 relates to finding and characterizing partitions by using K-means clustering and its extensions. Chapter 5 relates to hierarchical and separative cluster structures. Using encoder-decoder data recovery approach brings forth a number of mathematically proven interrelations between methods that are used for addressing such practical issues as the analysis of mixed scale data, data standardization, the number of clusters, cluster interpretation, etc. An obvious bias towards summarization against correlation can be explained, first, by the fact that most texts in the field are biased in the opposite direction, and, second, by my personal preferences. Categorical summarization, that is, clustering is considered not just a method of DA but rather a model of classification as a concept in knowledge engineering. Also, in this edition, I somewhat relaxed the “presentation/formulation/computation” narrative struc-ture, which was omnipresent in the first edition, to be able do things in one go.
Chapter 1 presents the author’s view on the DA mainstream, or core, as well as on a few Data science issues in general. Specifically, I bring forward novel material on the role of DA, including its successes and pitfalls (Section 1.4), and classification as a special form of knowledge (Section 1.5). Overall, my goal is to show the reader that Data science is not a well-formed part of knowledge yet but rather a piece of science-in-the-making.

Research target: Computer Science
Priority areas: IT and mathematics
Language: English
DOI
Text on another site
Keywords: regression analysisdata analysisData ScienceSingular Value DecompositionCluster analysis
Publication based on the results of:
A study of models of decision-making and analysis of complex structured data (2019) 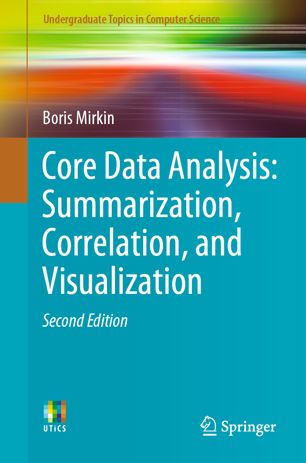