by year
Subject
News
Satanism, According to Science: How Sociology Explains the Worship of Dark Forces
The concept of Satanism originating from Roman Catholic sources continues to lack a rigorous social science interpretation. Satanism is sometimes believed to be a reflection of real-life problems faced by society and is sometimes considered a phenomenon in its own right that merits serious study. HSE doctoral student Oxana Mikhailova provides an overview of how the concept of Satanism is treated by different sociological theories and offers her commentary.
HSE Researcher Reveals Work Values Held by New Generation of Undergraduates
A large-scale study carried out by Anita Poplavskaya, postgraduate student at the HSE Faculty of Social Sciences’ Department of Economic Sociology, on a sample of 5,000 undergraduates at eight regional universities in Russia reveals the students' prevalent work values. The top five include high pay, interest in one's work, job security, skills match, and career prospects.
‘The Project Competition Will Kickstart New Research Collaborations
HSE University has announced the launch of a project competition in basic science research for intercampus departments of the university. The competition is aimed at supporting research as part of the HSE University Development Programme for the Period until 2030.

The Industrialisation of Soviet Russia. Volume 7: The Soviet Economy and the Approach of War, 1937–1939

This book concludes The Industrialisation of Soviet Russia, an authoritative account of the Soviet Union’s industrial transformation between 1929 and 1939. The volume before this one covered the ‘good years’ (in economic terms) of 1934 to 1936. The present volume has a darker tone: beginning from the Great Terror, it ends with the Hitler-Stalin pact and the outbreak of World War II in Europe. During that time, Soviet society was repeatedly mobilised against internal and external enemies, and the economy provided one of the main arenas for the struggle. This was expressed in waves of repression, intensive rearmament, the increased regimentation of the workforce and the widespread use of forced labour. 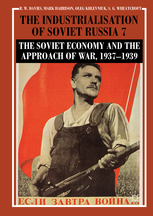