Proceedings of the Nineteenth International Conference on Geometry, Integrability and Quantization

We discuss some well-known facts about Clifford algebras: matrix representations, Cartan’s periodicity of 8, double coverings of orthogonal groups by spin groups, Dirac equation in different formalisms, spinors in <span data-mathml="nn dimensions, etc. We also present our point of view on some problems. Namely, we discuss the generalization of the Pauli theorem, the basic ideas of the method of averaging in Clifford algebras, the notion of quaternion type of Clifford algebra elements, the classification of Lie subalgebras of specific type in Clifford algebra, etc. 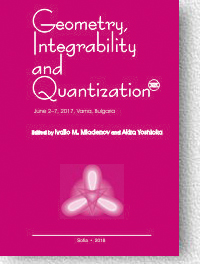 In this paper, we propose a unified analysis of variants of distributed SGD with arbitrary compressions and delayed updates. Our framework is general enough to cover different variants of quantized SGD, Error-Compensated SGD (EC-SGD), and SGD with delayed updates (D-SGD). Via single theorem, we derive the complexity results for all the methods that fit our framework. For the existing methods, this theorem gives the best-known complexity results. Moreover, using our general scheme, we develop new variants of SGD that combine variance reduction or arbitrary sampling with error feedback and quantization and derive the convergence rates for these methods beating the state-of-the-art results. In order to illustrate the strength of our framework, we develop 16 new methods that fit this. In particular, we propose the first method called EC-SGD-DIANA that is based on error-feedback for biased compression operator and quantization of gradient differences and prove the convergence guarantees showing that EC-SGD-DIANA converges to the exact optimum asymptotically in expectation with constant learning rate for both convex and strongly convex objectives when workers compute full gradients of their loss functions. Moreover, for the case when the loss function of the worker has the form of finite sum, we modified the method and got a new one called EC-LSVRG-DIANA which is the first distributed stochastic method with error feedback and variance reduction that converges to the exact optimum asymptotically in expectation with constant learning rate.

Методические указания к практическим занятиям для подготовительных курсов. Часть 2
Рыбакин А. С. Ч. 2. СПб.: Издательство СПбГЭТУ "ЛЭТИ", 1997.
On curves with Poritsky property
Glutsyuk A. Working papers by Cornell University. Cornell University, 2019
For a given closed convex planar curve γ with smooth boundary and a given p>0, the string construction yields a family of curves Γp for which γ is a caustic. The action of the reflection Tp on the tangent lines to γ≃S1 induces its action on the tangency points: a circle diffeomorphism p:γ→γ. We say that γ has string Poritsky property, if it admits a parameter t (called Poritsky--Lazutkin string length parameter) in which all the transformations p are translations t↦t+cp. These definitions also make sense for germs of curves γ. Poritsky property is closely related to the famous Birkhoff Conjecture. It is classically known that each conic has string Poritsky property. In 1950 H.Poritsky proved the converse: each germ of planar curve with Poritsky property is a conic. In the present paper we extend this Poritsky's result to germs of curves to all the simply connected complete surfaces with Riemannian metric of constant curvature and to outer billiards on all these surfaces. We also consider the general case of curves with Poritsky property on any two-dimensional surface with Riemannian metric and prove a formula for the derivative of the Poritsky--Lazutkin length as a function of the natural length parameter. In this general setting we also prove the following uniqueness result: a germ of curve with Poritsky property is uniquely determined by its 4-th jet. In the Euclidean case this statement follows from the above-mentioned Poritsky's result.
Quantization of Drinfeld Zastavain type A
Finkelberg M. V., Rybnikov L. G. Journal of the European Mathematical Society. 2012.

algebra $\hat{sl}_n$. We introduce an affine, reduced, irreducible, normal quiver variety $Z$ which maps to the Zastava space bijectively at the level of complex points. The natural Poisson structure on the Zastava space can be described on $Z$ in terms of Hamiltonian reduction of a certain Poisson subvariety of the dual space of a (nonsemisimple) Lie algebra. The quantum Hamiltonian reduction of the corresponding quotient of its universal enveloping algebra produces a quantization $Y$ of the coordinate ring of $Z$. The same quantization was obtained in the finite (as opposed to the affine) case generically in arXiv:math/0409031. We prove that, for generic values of quantization parameters, $Y$ is a quotient of the affine Borel Yangian.

Уравнение типа Хартри с потенциалом взаимодействия Юкавы в квазиклассическом приближении
Перескоков А. В., Липская А. В. Вестник Московского энергетического института. 2010. № 6. С. 99-109.
N=4 SYM Quantum Spectral Curve in BFKL regime
Alfimov M., Gromov N., Kazakov V. hep-th. arXiv. Cornell University, 2020. No. 2003.03536.
We review the applications of the Quantum Spectral Curve (QSC) method to the Regge (BFKL) limit in N=4 supersymmetric Yang-Mills theory.  QSC, based on quantum integrability of the AdS_5/CFT_4 duality, was initially developed as a tool for the study of the spectrum of anomalous dimensions of local operators in the N=4 SYM in the planar, N_c to infinity limit.  We explain how to apply the QSC for the BFKL limit, which requires non-trivial analytic continuation in spin S and extends the initial construction to non-local light-ray operators. We give a brief review of high precision non-perturbative numerical solutions and analytic perturbative data resulting from this approach. We also describe as a simple example of the QSC construction at the leading order in the BFKL limit. We show that the QSC substantially simplifies in this limit and reduces to the Faddeev-Korchemsky Baxter equation for Q-functions.   Finally, we review recent results for the  Fishnet CFT, which carries a number of similarities with the Lipatov's integrable spin chain for interacting reggeized gluons.
Математика. Механика: сборник научных трудов
Edited by: Г. Хромова Вып. 13. Саратов: Издательство Саратовского университета, 2011.
Representation Theory of Quantized Gieseker Varieties, I
Лосев И. В. In bk.: Lie Groups, Geometry, and Representation Theory. A Tribute to the Life and Work of Bertram Kostant. Vol. 326. Birkhäuser, 2018. Ch. 11. P. 273-314.

We study the representation theory of quantizations of Gieseker moduli spaces. We describe the categories of finite dimensional representations for all parameters and categories O for special values of parameters. We find the values of parameters, where the quantizations have finite homological dimension, and establish abelian localization theorem. We describe the two-sided ideals. Finally, we determine annihilators of the irreducible objects in categories O for some special choices of one-parameter subgroups.

In this paper, we consider several compression techniques for the language modeling problem based on recurrent neural networks (RNNs). It is known that conventional RNNs, e.g., LSTM-based networks in language modeling, are characterized with either high space complexity or substantial inference time. This problem is especially crucial for mobile applications, in which the constant interaction with the remote server is inappropriate. By using the Penn Treebank (PTB) dataset we compare pruning, quantization, low-rank factorization, tensor train decomposition for LSTM networks in terms of model size and suitability for fast inference.