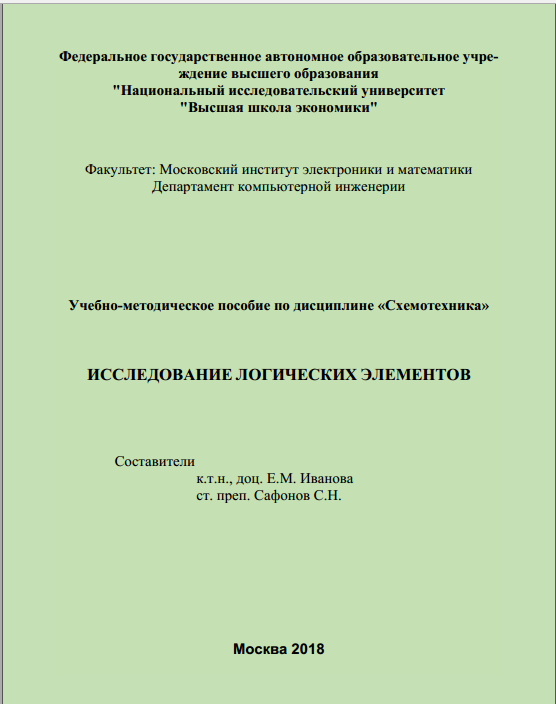 The aim is to consolidate the theoretical knowledge in areas of "Digital circuit engineering", "Triggers", "State Table". In this manual describes the features of the organization work with a stand UM-11, display elements and control stand. The classification of types of triggers, a description of the principle of operation of triggers, their comparison, the procedure of making the state table and timing diagram of switching. At the end of the laboratory work the student must have an idea of to be able to explain the obtained simulation results for their version of the task and to answer questions on the topic.

The aim is to consolidate the theoretical knowledge in areas of "Digital circuit engineering", "Counters". In this manual describes the features of the organization work with a stand UM-11, display elements and control stand. Brief theoretical information about counters, their purpose, parameters, methods of classification, rules of building a counter with a variable rate account and the frequency dividers. At the end of the laboratory work the student must have an understanding of the principles of counters and dividers to be able to explain the obtained simulation results for their version of the task and to answer questions on the topic.

Valuating the position of a controlled object using indicators which are management and control tools is widely used in many areas of the economy. Usually such indicators are based on internal data, however, as the volume of available open information grows, algorithms for valuation of the position of certain control objects and on open structured data are appearing. The disadvantage of these models is their narrow specialization and binding only to structured, and sometimes strictly official data, which, as a rule, have a rare publication frequency. This does not allow you to track the change in the position of the object at different times. The authors have proposed a concept for constructing a universal complex indicator (UCI) for express valuation of the position of a controlled object in various types of activity: banking, educational, industrial, etc. Another difference in the construction of the UCI is that the concept presented in the article assumes, as a reference point, to take into account the requirements of regulatory authorities, while in most Russian and foreign studies, indicators are built for the needs of investors. It is also proposed to use, along with structured and unstructured data, tracking the dynamics of changes in the position of the control object. To determine the UCI values on the basis of various econometric models and methods, the components that characterize the requirements of the control bodies to the control object are calculated; using them the UCI value is determined from the truth table. The concept proposed was tested to build an express valuation of the financial position of 108 banks for the period from 1 January 2018 to 1 February 2020. In accordance with the requirements of the Central Bank of the Russian Federation, the values of the three UCI components were obtained, and the value was calculated for each bank. The predictive ability of the constructed model, tested on three banks of the test sample, was confirmed by the consistency of the express valuation with their actual position in March 2020.

The purpose of this manual is to consolidate the theoretical knowledge in areas of "Digital circuit engineering", «Shift register.» In this manual describes the features of the organization of work of the shift registers. Brief theoretical information about their purpose, parameters, and classification rules for buffer creation, the shear and circumferential register and distributors of pulses. At the end of the laboratory work the student must have an understanding of the operating principles of registers and distributors of pulses, to be able to explain the obtained simulation results for their version of the task and to answer questions on the topic.