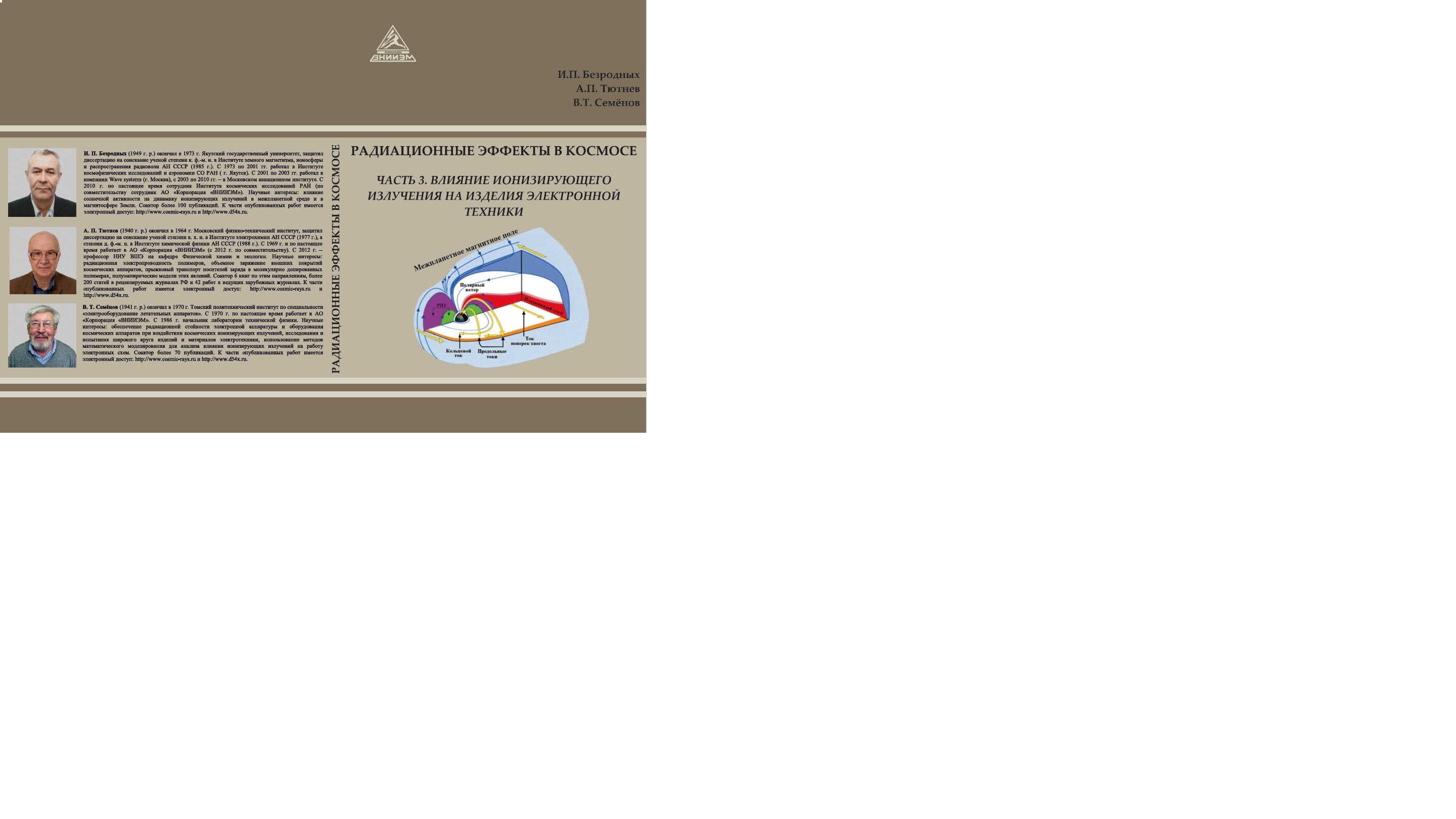 The effects of proton irradiation on SiGe heterojunction bipolar transistor (HBT) are investigated using Synopsys/ISE TCAD tool. To account for the impact of proton irradiation models for carrier lifetime degradation under irradiation are included in the program. The results of modeling the impact of protons of different energies are presented. For SiGe HBT increase in the base current for low-energy protons is more intense than for high-energy protons. We also present the simulation results of SiGe HBT dc and ac performance after proton exposure. The simulation results are in good agreement with experimental data.

consideration of the issues of the effect of radiation creating structural defects on the main parameters of bipolar transistors, Consider issues related to the influence of ionization factors on the operation of transistors (radiation transients), the effect of nuclear reactions and fast annealing on the parameters of transistors is considered; Classification of radiation effects in bipolar transistors is given.
Политические технологии в XXI в.
Лукашина Ю. И. Власть. 2012. № 1. С. 84-86.

Evolution of informational technologies in 21st century opens a door for a new form of both governance and political struggle. What is technology today, what influence does it have on society, why and how did mental and material changes interlace - these issues are considered in the article.

The concept of the space interpretation problem in some of the modern physics multiverse hypotheses
Ivan A. Karpenko. Humanities. HUM. Basic Research Programme, 2015. No. 98.
In order to determine the concept of space interpretation in several multiverse hypotheses, this article analyzes a number of them, which arises from some theories of modern physics. The interpretation of space in the history of philosophy and science and their interrelation with modern physical notions are presented. The research is based on the cognitive interpretation method of the contents of formalistic mathematics and physics theories, the method of comparative analysis (analysis of philosophical texts), the hermeneutical method, and the phenomenological method (analysis of representations). The author shows how the context of modern physics multiverse hypotheses contributes to new connotations in the perception of space. The research draws some conclusions about the present status of the philosophical perception of space.
Международной научной конференции "Классическое лингвистическое образование в современном мультикультурном пространстве - 2"
Edited by: Н. Л. Грейдина Пятигорск: 2006.
Применение информационных и космических технологий в задачах о движении небесных объектов
Чумаченко Е. Н., Кулагин В. П., Назиров Р. Р. и др. Информатизация образования и науки. 2011. № 3 (11). С. 178-187.
One of directions of activity of the scientifically-educational centre "SPACE" created by the Moscow state institute of electronics and mathematics (technical university) and Space research institute of the Russian Academy of Sciences is discussed. The general statements of problems connected with working out of models of movement of asteroids and comets taking into account not gravitational indignations and construction of models for measurement of trajectories are considered. On a space vehicle orbit in a vicinity of libration’s points the traffic control model is discussed with application of a solar sail with operated reflective characteristics.
Категориальный статус времени и пространства в «Колымских тетрадях» В. Шаламова
Романова Т. В. Функциональная лингвистика. 2010. № 1. С. 200-202.
2017 International Workshop on Reliability of Micro- and Nano-Electronic Devices in Harsh Environment” (IWRMN-EDHE 2017)
Jinshun B. Institute of Microelectronics of Chinese Academy of Sciences, 2017.
Analysis and features parameters normalization EMC cosmic devices and systems
Grachev N.N. In bk.: Innovative Information Technologies: Materials of the International scientific–practical conference. Part 2. Prt. 2. M.: HSE, 2014. P. 573-577.
This paper analyzes the problem of EMC spacecraft. Complexity of the problems of EMC is directly related to the main trends of design space RES. The results of analysis parameters EMC and rationing in developing RES spacecraft.
Simulation of Total Dose Influence on Analog-Digital SOI/SOS CMOS Circuits with EKV-RAD macromodel
Petrosyants K. O., Kharitonov I. A., Sambursky L. M. et al. In bk.: Proceedings of IEEE East-West Design & Test Symposium (EWDTS’12). Kharkov: Kharkov national university of radioelectronics, 2012. P. 60-65.

An EKV-RAD macromodel for SOI/SOS MOSFET with account for radiation effects is developed using a subcircuit approach. As an addition to the standard version of the EKV model 1) radiation dependencies of parameters VTO, GAMMA, KP, E0 are introduced and 2) additional circuit elements to account for floating-body effects and radiation-induced leakage currents under static and dynamic radiation influence are connected. Maximum simulation error is 5–7% in the dose range up to 1 Mrad. It is shown that EKV-RAD spends less CPU time by 15–30% for analog and 40–50% for digital SOI/SOS CMOS circuits simulations compared to BSIMSOI-RAD model.